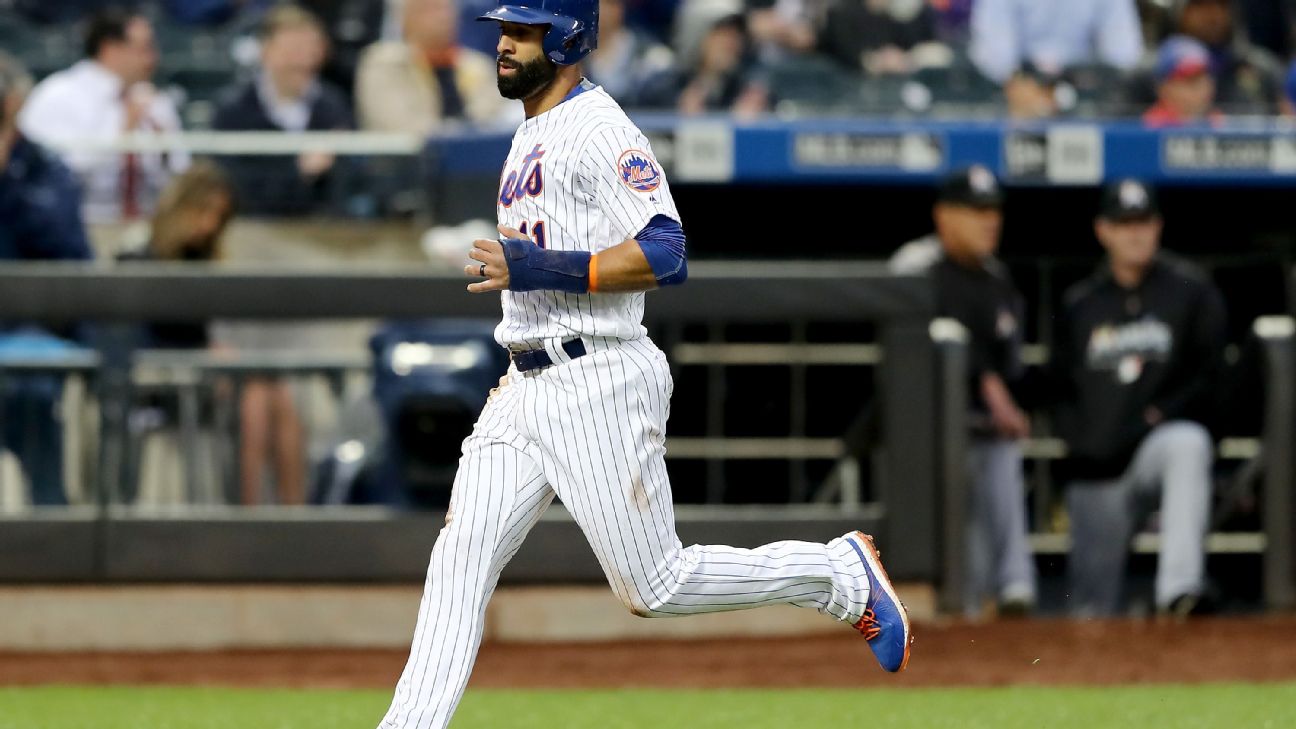 NEW YORK -- Jose Bautista was sitting on his couch at home in Florida when the call came Tuesday afternoon. He had a new job, with the New York Mets.

So the former home run champ hustled to the airport in Tampa, Florida, hurried to Citi Field and was in such a rush, he didn't meet his manager until he came off the grass from stretching.

And an hour after joining the Mets, he swung into action.

The six-time All-Star hit a double in his first at-bat in a 5-1 loss to Miami on Tuesday night. Bautista drew a nice cheer from the sparse crowd on a rainy evening and plenty of high-fives from his new teammates in the dugout after scoring their only run.

The 37-year-old Bautista finished 1-for-3 and called it "one of the wildest days" in his career.

Needing an extra outfielder, and preferably one who can tag left-handed pitchers, the Mets signed Bautista two days after he was cut by Atlanta.

The Mets said he arrived at the ballpark about a half-hour before game time. They reworked their original lineup and had him batting fifth.

Bautista quickly lived up to his nickname of Joey Bats by doubling down the left-field line in the second inning off lefty Caleb Smith, and he scored on Tomas Nido's sacrifice fly.

"I've had better success versus lefties lately," he said.

Bautista's hit came against a familiar opponent. Of the 12 games the righty hitter played this month in his short time with the Braves, five were against the Marlins, including one started by Smith.

"This is something we felt we should try to do," Mets general manager Sandy Alderson said of signing Bautista.

The Mets recently lost former Gold Glove center fielder Juan Lagares to a season-ending toe injury. Slugger Yoenis Cespedes is out with a strained right hip flexor, with no timetable for his return.

"The outfield position has been thin for us," Alderson said.

Bautista made a sliding stop on Brian Anderson's double into the alley in the second inning, then caught a fly to end the third and tossed the ball into the stands as a souvenir. He struck out swinging his last two at-bats.

Bautista quickly acclimated to his new surroundings. A few minutes before the first pitch, a clubhouse attendant showed him four bats on the bench, and Bautista nodded yes. Before he hit, he went searching for powder in the on-deck circle, and asked a bat boy to find it for him.

Just by getting on the field, Bautista's second stay with the Mets lasted longer than his first stint.

Bautista was a rookie when he was dealt from Kansas City to the Mets at the trading deadline in July 2004. Hours later, the Mets shipped him in a package to Pittsburgh for pitcher Kris Benson. That season, long before he developed his big, pulling-hitting power stroke with Toronto, Bautista played for four different teams in the majors -- Baltimore, Tampa Bay, Kansas City and Pittsburgh.

Bautista signed for the $545,000 major league minimum. Alderson said the six-time All-Star wasn't considered merely a short-term fix, and said Bautista was told he wouldn't be playing every day.

Along with the corner outfield spots, Bautista could possibly see action at third base and first base, too. Alderson said the newcomer was aware his performance would determine his playing time.

Bautista played only third base with Atlanta, starting at the spot eight times. He hit .143 (5-for-35) with two home runs and five RBIs, striking out 12 times.

Bautista hit .203 with 23 homers and 65 RBIs in 157 games last season with Toronto, and went unsigned as a free agent during the winter. He struck out 170 times.

"A lot of guys have been striking out a ton," Alderson said.

Alderson said his assistant, former Blue Jays general manager J.P. Ricciardi, was familiar with Bautista from their days in Toronto. Alderson said he'd heard a couple of other teams were interested in signing Bautista.