Jose Canseco shoots self in hand 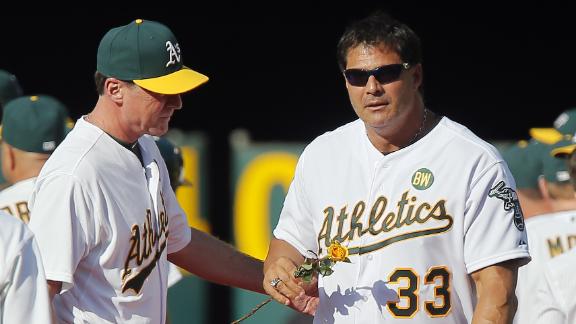 LAS VEGAS -- Former major league slugger Jose Canseco is recovering after shooting himself in the hand at his Las Vegas home.

Reddon says Cansecotold police he was cleaning his gun in the kitchen when it fired, shooting a finger on his left hand. He was taken to University Medical Center of Southern Nevada.

Agent Jose Melendez says Canseco was resting at home Wednesday, and friends and family were hoping his finger would respond well to a surgery.

Canseco played 17 years in the major leagues, starring for the Oakland Athletics as one of the "Bash Brothers" in the late 1980s. He was part of the A's 1989 World Series championship team and last played for the Chicago White Sox in 2001.

The right-handed outfielder and designated hitter had 462 career home runs and was a six-time All-Star. He also played for Texas, Boston, Toronto, Tampa Bay and the New York Yankees.