Josh Norman: 'When you're at the top of your profession, someone is always trying to grab at you' 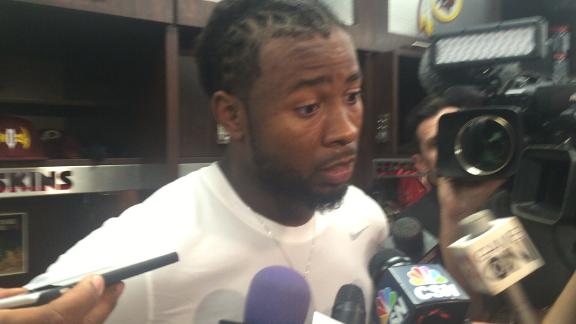 ASHBURN, Va. -- Washington Redskins cornerback Josh Norman continues to be puzzled why he's become such a fascination for other players. But he's also aware of who's doing the talking. On Wednesday, it was New York Giants wide receiver Victor Cruz. On Thursday, Norman returned serve, without taking a direct shot.

The Redskins don't play the Giants until Week 3, but the momentum for that game started building the minute he signed with Washington in April because of his on-field battle with Giants' wideout Odell Beckham Jr. in December.

Cruz took a jab at Norman for not spending much time on Pittsburgh's Antonio Brown on Monday night.

"Especially if he calls himself -- I don't call him this, he calls himself the best corner in the league -- then you have to go cover the best receivers on the other team," Cruz told reporters. "Going in, I thought he was going to follow AB all over the place, but he didn't. So it is what it is. He made his choice."

For Norman, it's yet another player making yet another comment on his game. It happens often, and he became a big topic again this week after the Redskins decided not to have him isolated on Brown.

"Not somebody else's team that we're not even playing this week," Norman said. "I'm sure they need to worry about their matchups. Let's keep it that way. It's like, 'Wow.' You take it with a grain of salt."

The buildup for Norman's meeting vs. Beckham and the Giants will intensify next week. It became a minor topic in their locker room Thursday because of Wednesday's comments.

Redskins receiver DeSean Jackson, for one, enjoys it.

"I love it," Jackson said. "Let the people say what they want to say, get riled up. We're going to have to see them in two weeks. Whatever Vic feels he has to say, that's his opinion. He still has to go on the field and play against Josh so whatever you say, get ready to back it up when we come play y'all."