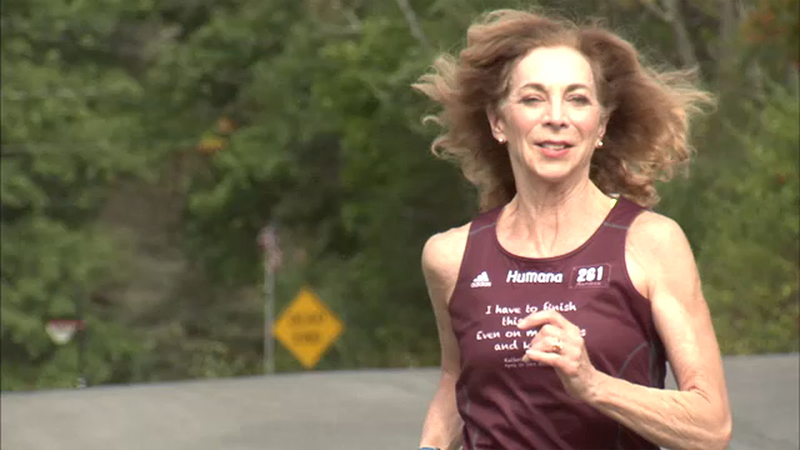 NEW YORK CITY (WABC) -- It's hard to imagine an icon like Kathrine Switzer has anything left undone in her sport. Yet, she's signed up for a race experience that has escaped her until now - running the 5 borough course of the TCS New York City Marathon.

Switzer is the first woman to officially enter and finish the Boston Marathon.

During the 1967 race, officials tried to physically remove her from the course because she was female.

The iconic photos of her being pushed while running would have stopped most runners in their tracks.

Kathrine recalls at just 20 years old she kept running and declared to her coach, "I'm finishing this race on my hands and knees if i have to..."

She bravely crossed that finish line, but that was actually just the beginning of Kathrine's legacy which has gone on to transform running.

Her courageous stance led to the Women's Marathon as an Olympic sport, women's only races in the Avon series, and a revolution of females entering races worldwide. To celebrate her 50 year anniversary of that day, Kathrine would return to Boston and run her race again at 70 years old. (Incredible! Her milestone finish in 2017 was just 20 minutes off her original time five decades ago.)

Now she's lining up for the TCSNYC Marathon 2017. She was actually a part of the New York Road Runners when Fred Lebow started the race originally as four laps in Central Park.

"I actually won it in 1974 when it was still in the park," Kathrine said. "We always dreamed of taking the race out of the park."

By the time that happened in 1976, Kathrine's role in growing the sport took her into TV coverage. Over 30 years she would report the journey of women racing from exclusion to more women than men entering some races today! But Kathrine says that legacy has left one task undone - running the New York course through the open streets.

"It will be exciting to run through the five boroughs. I've never done that to experience the neighborhoods," Kathrine said, adding she gets excited just thinking about the race she has always loved. "It's going to be electrifying."

A New York girl through and through, she says she's trained thousands and thousands of miles in Central Park over the years.

"I know every crack in the pavement," she said.

Now, she trains upstate in the woods around New Paltz.

Running marathons this year is part of her desire to pass the torch of courageous women running. Her conviction now is for women globally to use running to be fearless in life -- naming her foundation after that number they tried to tear off during Boston 1967.

"261 is the bib number that one that angry official tried to rip off me," Kathrine says.

Thirteen women will be running to represent the 261 Fearless Inc.

"Everybody relates to a story about being told you are not good enough, that you're too old, too fat, the wrong race or wrong religion," says Kathrine, but she has seen the transformational ability of running to transcend those words.

Watch for her at the finish. She'll be wearing 261.

"It's my north star. It's my touchstone. Everyday I run, I feel like I have victory under my belt. It transfers to every area of my life," she said.
Report a correction or typo
Related topics:
sportsnew york city2017 tcs nyc marathonrunningnycmarathon
Copyright © 2021 WABC-TV. All Rights Reserved.
2017 TCS NYC MARATHON
Hospital for Special Surgery helps runner get back on her feet
Bronx goIT team competes with healthy food app
Final finishers: Inspiring stories of runners who wouldn't give up
Shalane Flanagan, Geoffrey Kamworor win TCS New York City Marathon
TOP STORIES
Biden family dog Champ dies
How NYC and the Tri-State are celebrating Juneteenth
George Floyd statue unveiled in Brooklyn
Kids dive for cover as gunman opens fire on NYC sidewalk
AccuWeather: Humid with PM storm, air quality alert issued for Long Island
Will NYC, Tri-State area be impacted by Tropical Storm Claudette?
Shooting spree suspect thought people were after him for prior shooting: Police
Show More
Dazzling Durant, hobbled Harden lead Nets into Game 7 vs. Bucks
What to know about voting in NYC's mayoral primary
Islanders, down 2-1 vs. Lightning, looking to bounce back once again
NYC elections: What is ranked choice voting?
COVID Updates: Canada, US extend border restrictions until July 21
More TOP STORIES News