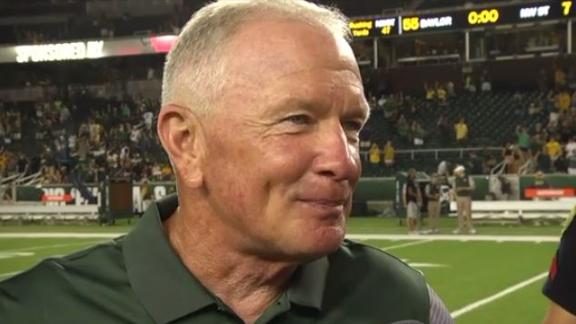 Baylor offensive coordinator Kendal Briles paid tribute to his father, ex-Baylor head coach Art Briles, by coaching the Bears' 55-7 season-opening win over Northwestern State with the initials "CAB" written on both of his hands.

Grobe said he had "no problems whatsoever" with Kendal Briles paying tribute to his father from the sideline.

"If you don't love your dad, something's wrong," Grobe said. "I don't have any problems with that at all. He's got a little pressure on him, because Art's not a bad football coach. His son, whether he can get this thing going like they had it going, I think tonight was a great start."

Grobe did not know Kendal Briles had written the initials on his hands and joked that he wondered whether "CAB" was just a reminder to call a certain play.

Kendal Briles is in his ninth season coaching at Baylor and his second as offensive coordinator. He was a finalist for the Broyles Award in 2015, awarded to the nation's top coordinator. Baylor assistant coaches are not available for interviews this season.

"Kendal is special," Grobe said. "I just think about him losing Art, as his head coach and his dad, it had to be tougher on KB than anybody. He's been nothing but class. He's been a true gentleman the whole time and he's on fire to coach these guys."

Art Briles has hired agent Jimmy Sexton as he attempts to make his way back into coaching, ESPN's Mark Schlabach reported Friday. He has told reporters he plans to be a head coach again in 2017.