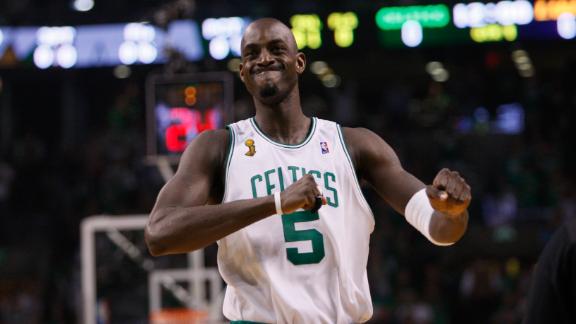 MINNEAPOLIS -- Kevin Garnett has decided to retire after 21 seasons in the NBA, leaving a legacy as one of the best defensive players in league history and one of the game's most influential and intense competitors.

Garnett posted a farewell video on Friday, four days before the Minnesota Timberwolves are set to open training camp. He narrates the short, black-and-white video that shows him walking alone through Target Center with sunglasses on.

Garnett informed the Timberwolves of his decision to retire Friday. The team will waive the franchise icon, which will allow him to collect his entire $8 million salary for the 2016-17 season.

The San Antonio Spurs made the same move with Tim Duncan when he retired this summer.

"It has been a real joy to watch KG come into the league as a young man and watch him develop his skills to become one of the very best in the NBA," Timberwolves owner Glen Taylor said in a statement. "I have treasured the opportunity to see him grow as a leader. I wish him continued success in the next chapter of his life. His Minnesota fans will always cherish the memories he has provided."

Team president and coach Tom Thibodeau, who coached Garnett as an assistant with the Celtics during their title-winning season in 2007-08, said in a statement Saturday: "His fierce competitiveness, his unequaled passion for the game, and the many ways in which he cared about this team was truly special. KG is without question the all-time best player to wear a Minnesota Timberwolves jersey, and he is also one of the best ever to play the game.''

The 40-year-old Garnett put the Timberwolves on the map by turning one of the most hapless franchises in professional sports into a perennial playoff team.

Garnett came into the league straight from high school in 1995, the first player to do so in two decades. He was a skinny 7-footer with a bright smile and a versatile game when the Timberwolves took a chance and plucked him from Chicago's Farragut Academy with the fifth overall pick.

His success opened the door for a new generation of teenagers to pour into the NBA.

The decision was considered a risk at the time, but Garnett's success paved the way for Kobe Bryant, LeBron James and Tracy McGrady to follow him.

Some of them, like James, Bryant and Jermaine O'Neal, were wildly successful. Others like Korleone Young, Kwame Brown and Eddy Curry flamed out.

The influx of youth into the league prompted the NBA to adopt a rule that required players to play at least one year of college, and that wasn't the only major change brought about in part because of Garnett.

Through his basketball career, Garnett insisted on being listed at 6-foot-11 even though he was at least 2 inches taller. He didn't want to be pigeon-holed as a big man who needed to stay around the basket when he was so much more.

Known as the "Big Ticket,'' Garnett could handle the ball, shoot it from outside, take an opponent off the dribble and post up as well while being able to guard all five positions. He was one of five players to play at least 50,000 minutes, and his practice habits are the stuff of legend.

Garnett also made more than $330 million in his career, the most by any player in league history, and owners dug their heels in during a lengthy lockout in 1997 after a 21-year-old Garnett signed a six-year, $126 million deal.

He won the MVP award in 2004 after leading the Timberwolves to the Western Conference finals and later teamed with Paul Pierce and Ray Allen to revive the Celtics as an Eastern Conference power. Garnett played six seasons after being traded to Boston after spending his first 12 seasons in Minnesota.

As a Celtic, Garnett won his only championship ring in 2008.

"Everything changed the day Kevin arrived in Boston," Celtics co-owner and managing partner Wyc Grousbeck said in a statement. "From that moment we knew we would get to the Finals and have a chance to win. I've never met such a relentless competitor or such a great teammate."

He was unyielding on the court, bumping his head on the basketball support while muttering to himself and working up a sweaty lather before the opening tip. One of his trademark moves was to block the shot of an opposing player who tried to get a freebie after a foul was called. The message was clear: Nothing was going to be easy with him prowling the paint.

"Very few players can affect an organization like Kevin did here in Boston, both on and off the court," Celtics president Danny Ainge said. "He led our team by example every day with his drive, his passion, and his relentless commitment to winning. While always putting team ahead of individual, Kevin earned his place among the greatest players in Celtic and NBA history."

He spent a forgettable season and a half with the Brooklyn Nets before the late Flip Saunders convinced Garnett to agree to a trade to return to Minnesota at the deadline in 2015.

During his second stint with the Wolves, he served as a mentor to youngsters like Karl-Anthony Towns, Andrew Wiggins, Gorgui Dieng and Zach LaVine, instilling in them a sense of intensity and professionalism that helped lay the foundation for what the team hopes is a breakout year for the upcoming season.

"You know how much I'm gonna miss playing with you and just simply having you around,'' Towns wrote on Instagram . "Congrats on having one of the greatest careers the game has ever seen. We talked. I know what I must do. I'll take it from here.''

Garnett had contemplated returning for a 22nd season, which no player has ever done. But knee issues limited him to just 85 games over the past two seasons, and after Saunders died from Hodgkin's lymphoma before last season, Garnett lost the man he trusted most in the organization.

Garnett spoke often of his desire to one day get into ownership with the Wolves, but it remains unclear if that is still possible after Saunders' passing. The Wolves have new basketball leadership in coach/president Tom Thibodeau and GM Scott Layden, and Garnett has little sway in the organization now that Saunders and previous coach Sam Mitchell are gone.

"That would be a lot up to him,'' Taylor said. "Things have changed so much and does he still want to do that? We certainly will have the opportunity to talk about that. There's a lot of good reasons to do it and I'm open to it.''

Garnett finishes his NBA career as one of three players with 25,000 points, 10,000 rebounds and 5,000 assists. The others are Hall of Famers Kareem Abdul-Jabbar and Karl Malone.

Garnett was the NBA's rebounding champion for four straight seasons from 2003-04 to 2006-07. The only players all time with longer such streaks are Dennis Rodman (seven straight) and Moses Malone (five straight).

"Kevin Garnett is one of the fiercest competitors our league has ever seen," commissioner Adam Silver said. "He held himself to the highest standard of preparation and performance for a remarkable 21 seasons. On behalf of the NBA family, I thank Kevin for his sustained excellence and the enormous impact he's had on the game."

As the Instagram video concludes, Garnett says: "We going to be all right, man ... I don't expect this to be easy. But so far, so good. Stay tuned.''

KG's perseverance led to fairytale ending
Brian Windhorst examines Kevin Garnett's legacy and how "The Big Ticket" changed the power forward position and the structure of the NBA.