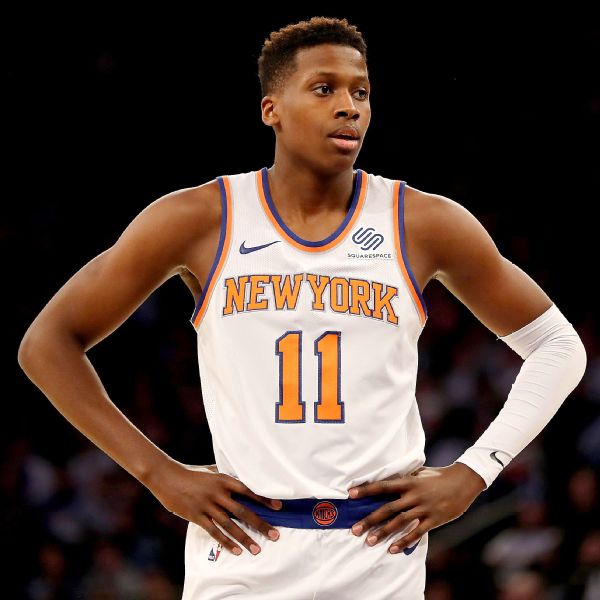 ESPN
By Ian Begley
Some see the New York Knicks' trade for point guard Emmanuel Mudiay as a sign that the organization has lost faith in rookie point guard Frank Ntilikina.

"The organization is not down on Frank," Perry said in a conference call. "He's going to be fine. This isn't in any way a negative reflection on him and who we think he's going to be and who he has an opportunity to be. I've said to you many times, he's a 19-year-old kid who has some very good tools and a lot of upside."

"I think it will help each one of these guys, really," Perry said. "I'm excited to see how [it] manifests itself on the court. I think there's some promising options that could lie here."

The Knicks traded Doug McDermott and a 2018 second-round pick away in a three-team deal with the Dallas Mavericks and Denver Nuggets that netted Mudiay. Perry on Friday labeled the trade as the "talent-acquisition phase" of roster construction in New York, an indication that the club faces a long rebuild ahead with star Kristaps Porzingis sidelined for at least 10 months with a left ACL tear.

Prior to the Porzingis injury, the Knicks held out hope of making the playoffs. With Porzingis out, the Knicks' focus has shifted to the 2018 NBA draft and to acquiring young players like Mudiay in low-risk acquisitions.

Mudiay, the seventh overall pick in the 2015 NBA draft, did not meet expectations in Denver.

He averaged 8.5 points and 2.9 assists this season while coming off the bench with the Nuggets this season after starting in his first two years the league.

According to ESPN Stats & Information research, only Stanley Johnson and Marcus Smart have played as many minutes while shooting worse than Mudiay, whose career percentage is 37.5. He also has struggled defensively, ranking last in the league among all point guards in defensive real plus-minus.

Perry is hopeful that Mudiay can realize some of his potential in New York.

"During my 18 years in the league, I've seen so many players where it's taken time," he said. "Just because a player doesn't hit the ground and become a star right away or struggles for 3-4 years in a particular place -- or places for that matter -- doesn't mean that they can't become good NBA players."

"We've got to compete internally as well as we can, and if you compete well internally, it gives you a better chance to compete externally," the first-year GM said.

In addition to trading for Mudiay, the Knicks also tried to trade veteran center Joakim Noah prior to Thursday's trade deadline. New York was unable to find a deal, and the club and Noah have mutually agreed that he will remain away from the team until further notice in the wake of an argument with head coach Jeff Hornacek.

Earlier this week, Noah remained opposed to any buyout negotiations on the remainder of the four-year, $72 million contract he signed in the 2016 offseason, sources say.

In general, Perry said the Porzingis injury won't change his approach to building the Knicks' roster. Porzingis' injury, though, clearly gives the Knicks an opportunity to build through the draft rather than trying to chase a playoff berth. New York, which has missed the playoffs for four straight seasons, owns all of its first-round picks going forward. The club projects to have significant cap space in the summer of 2019.