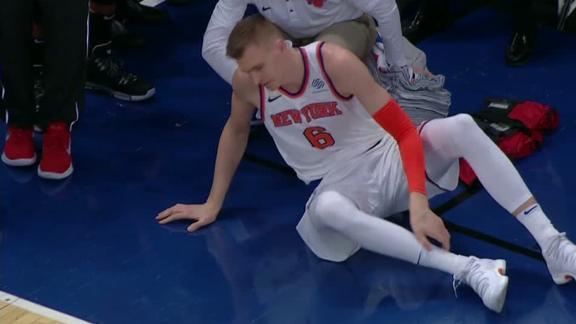 New York Knicks star Kristaps Porzingis hopes that he won't miss any games after suffering what appeared to be a significant ankle sprain on Wednesday night.

"Right now I'm walking around with no crutches, no boot, no nothing. I don't think it's that serious, but we'll see how I feel [Thursday]," Porzingis said after leaving the Knicks' 115-86 win over the Heat in the first quarter with a right ankle sprain.

Porzingis said he and the Knicks will decide Thursday if he'll need an MRI to further determine the extent of the injury. X-rays taken Wednesday night were negative. Originally, the Knicks said Porzingis was available to return to the game. But the third-year forward said that he and team doctors concluded at halftime that he shouldn't return, in part because New York led by double-digits at the time.

Porzingis was hurt when he and Justise Winslow were pursuing a loose ball on the baseline, and Winslow stepped on Porzingis' right foot. Porzingis' foot turned, and he appeared to roll his ankle. He stayed on the floor for several minutes before walking to the locker room while being supported by a teammate and a team staffer.

Porzingis said afterward that he felt his ankle "touching the floor," but he didn't feel significant pain immediately after the injury.

Any missed time for Porzingis would be a significant loss for New York (11-10). The 22-year-old entered play on Wednesday ranked fourth in the NBA in points per game (27.0) and first in blocks per game (2.2).

Porzingis, though, is optimistic that he won't be out for long. He said he has a penchant for healing quickly, and at least one of his teammates agrees.