New York Knicks president Steve Mills said Kristaps Porzingis hadn't fully bought in to the team's plans for the future, which is one reason the franchise decided to honor his trade request by sending him to the Dallas Mavericks on Thursday.

"We feel like we did the right thing," Mills said on a conference call Thursday night. "When you try to think about how you want to build your team for the long term, you don't want to commit a max [contract] to a player who clearly says to you he doesn't want to be here. That would be a disservice for our organization and disservice to our fans."

Mills said Thursday night that Porzingis, a restricted free agent this summer, informed him and general manager Scott Perry that he "no longer wanted to be a part of our group" during a Thursday morning meeting. The meeting lasted less than five minutes, league sources told ESPN.

Perry said the Knicks were aware of Porzingis' displeasure with the direction of the franchise in recent weeks. That was despite the fact that both parties seemed to be on the same page after New York elected not to extend Porzingis' rookie contract, Mills said. The team president cited Porzingis' time spent at the team facility as one sign of his disconnect from the franchise. New York began to speak to teams about different trade scenarios involving Porzingis in recent days.

"When the meeting occurred this morning, we'd already been having many conversations with a number of teams," Perry said. "So we decided to act upon one."

In doing its due diligence, New York contacted the New Orleans Pelicans about an Anthony Davis trade in recent days. There was uncertainty about Porzingis' desire to play with the Pelicans long term, sources said.

At the time of their trade of Porzingis, the Knicks had several offers for the 23-year-old big man, league sources told ESPN.

The move leaves New York with roughly $70 million in cap space for the summer of 2019 -- enough room to add two max free agents.

"We're going to be prudent in how we use that room because we're still consistent in building this team through the draft and with young players," Mills said. "And when there is an opportunity to add a free agent, that certainly is one of the tools that we have in our toolbox."

Perry said the team's big-picture goal of building around young players hasn't changed in the wake of the Porzingis trade. Mills added that team owner James Dolan gave him and Perry the freedom to make the trade as they saw fit.

Asked about it Thursday, Perry said he doesn't feel added pressure to land a top free agent now that the Knicks have additional cap space.

"We're excited that we have some flexibility there. We're excited with what we did get in this trade," Perry said. "Again, we'll let the summer take care of itself. But we're happy with what we were able to get in return for this deal, and again, we're getting a really good young player back here in Dennis Smith that we're excited about."

The Undefeated's Marc J. Spears contributed to this report. 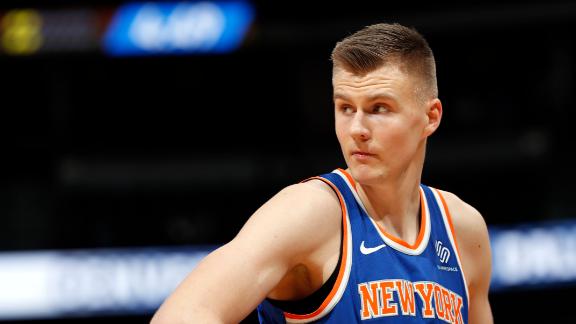