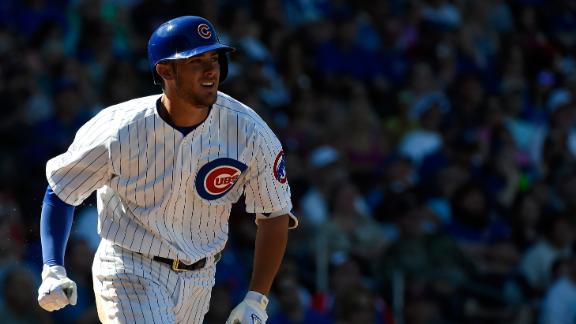 Kris Bryant was reassigned by the Chicago Cubs to their minor league camp Monday despite his outstanding spring training at the plate, triggering a threat of litigation from the players' association.

If Bryant spends 12 or more days in the minor leagues, Chicago would delay the slugging third baseman from becoming eligible for free agency by one year, until after the 2021 season, according to baseball's collective bargaining agreement.

"Today is a bad day for baseball," the Major League Baseball Players Association said in a statement. "I think we all know that even if Kris Bryant were a combination of the greatest players to play our game, and perhaps he will be before it's all said and done, the Cubs still would have made the decision they made today. This decision, and other similar decisions made by clubs will be addressed in litigation, bargaining or both."

"In accordance with long established practice under the Basic Agreement, a club has an unfettered right to determine which players are part of its opening-day roster," MLB said in a statement. "This issue was discussed extensively in bargaining in 2011, and the principle was not changed. We do not believe that it is appropriate for the players' association to make the determination that Kris Bryant should be on the Cubs' 25-man roster while another player, who, unlike Bryant, is a member of its bargaining unit, should be cut or sent to the minor leagues."

Bryant, who is not on Chicago's 40-man roster, was slowed defensively in the middle of camp by right shoulder soreness.

"It's always difficult to send young players down because it is news they don't want to hear," Cubs president Theo Epstein said. "We entered camp with the presumptive move of sending him to Triple-A, and it is always the presumptive move for us with young players who haven't played in the big leagues yet. You see how camp develops and how the roster shapes up to see if there is grounds for an exception to the rule."

Bryant was not available to discuss the decision. His agent, Scott Boras, called it "Ersatz Baseball."

"MLB is not the MLB without the best players," Boras said in a text message to The Associated Press. "Kris excelled at every level and earned the right of entry. The CBA is at the apogee of wrongs incentivizing clubs to create a product less than best. Bryant's situation is the badge for change to the CBA player service structure."

The demotion of Bryant, who led the minor leagues with 43 homers last season, was expected but controversial.

"In this case it was the right thing to do," Epstein said. "His performance really mattered, and he made a great first impression on Joe. It demonstrated clearly to everybody that he is really close to not just being in the big leagues but an important role on the team."

Maddon said he is looking forward to working with Bryant, whom he called a "brilliant talent."

"When you look at the entire picture of development you're still looking at a couple areas to improve a little bit," Maddon said Monday. "I'm not going to sit here and tell you that you wouldn't like to have him in your lineup. He's also 23. I'm looking forward to working with this guy for the next 15 years.

"He's a brilliant talent. I'm not going to sit here and say things that are disingenuous. This guy is good. He's going to be really good."

Boras questioned the Cubs' "integrity" earlier this month when discussing the possibility of Bryant starting the year in the minors. His comments prompted baseball commissioner Rob Manfred to chide Boras on Friday.

"I don't think the Cubs' decision with respect to what's going to happen with Kris Bryant is really any of Mr. Boras' business," Manfred said.

Baez, 22, was competing for the starting second-base job. He entered Monday's game against San Francisco hitting .173 with 20 strikeouts in 52 at-bats

"He is so close to getting it figured out in the batter's box and we feel like Triple-A is the right venue for him to continue making those adjustments and get locked in," Epstein said. "He does everything else so well on the baseball field, he is a winning baseball player. He just has to take that same mindset in the batter's box."

Russell, 21, was acquired from Oakland in the Jeff Samardzija trade on July 5. He hit .324 in 37 at-bats during spring training.

"I couldn't tell him what to work on," Maddon said. "He is that accomplished at that age. I asked him to keep doing what he is doing."

Epstein and Maddon both said there were heated debates on the decisions when it came to Baez and Bryant.

"In a healthy organization there should be different opinions expressed, bounce ideas off each other, talk about different aspects of the game and how you weigh different variables," Epstein said. "These players were new to Joe so he is seeing them for the first time and we couldn't have had a healthier debate about it and in the end we all agreed. I think I could probably be in this game for a long time and not send down three players that talented on the same day ever again. Those three are pretty good."

Bryant and the Russell were rated as baseball's top- and fourth-ranked prospects overall, respectively, earlier this year by ESPN Insider Keith Law.

ESPNChicago.com's Jesse Rogers and The Associated Press contributed to this report.