Kristaps Porzingis: 'I see myself as a Knick for a long, long time' 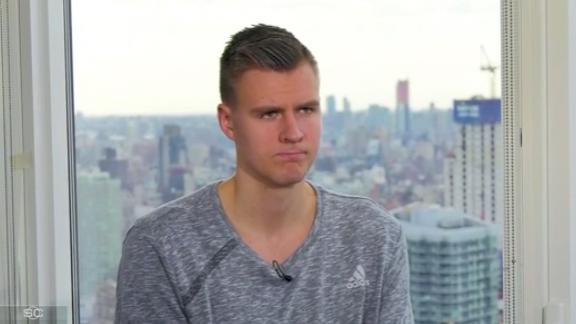 ESPN
By Ian Begley
NEW YORK -- Kristaps Porzingis said some of his brother's comments about the player's future with theKnickswere taken out of context and that he sees himself as a Knick for a "long, long time."

Asked before Friday's game about the possible fan reaction to his brother's comments, Kristaps Porzingis strongly indicated that he planned to remain with the Knicks.

"I think fans know I'm here in New York, I love New York and I see myself as a Knick for a long, long time," he said. "And I think they shouldn't be worrying about that."

Porzingis, 22, is in his third NBA season. He scored 37 points Friday in a 120-107 victory over the Phoenix Suns, just shy of the career-best 38 points he scored Monday against Denver.

He is eligible to sign a five-year rookie extension starting this summer that is worth between 25 and 30 percent of the salary cap (a projected $157 million to $188 million in total). If he wanted to become an unrestricted free agent, Porzingis would have to play his fifth season with the Knicks on a qualifying offer, which would be for $7.5 million -- significantly less annual money than he could earn via an extension.

Janis Porzingis, in an interview with a Latvian publication translated by Eurohoops.net, suggested that factors beyond money could cause his brother to eschew the extension and leave New York.

"The most important question here is this: What do you really want to achieve in your career?" Janis Porzingis, who works as a representative for his brother under Andy Miller, Porzingis' primary agent, said in an interview in Latvian with Sporta Avize, according to a translation by Eurohoops.net. "Because money -- if Kristaps performs at least on his normal level -- is gonna come. We are more focused on some other values and not just to quickly sign a new contract so we can collect the money. That's definitely not our goal, so we won't be feverishly counting minutes or counting points. You can't escape the reality, and the Knicks must also see that.

"From their point of view, Kristaps is the focal point at the moment, so you cannot upset him much, or otherwise, at the end of the season, he will say, 'It's not so cool here.' The second question is: Who is the New York audience coming to watch now? To a large extent, it's Kristaps. So the organization has to take that into account."

Janis Porzingis added that no one on Kristaps' side is seriously considering their extension options at this point. Kristaps Porzingis basically echoed that thought, saying several times on Friday that he didn't wish to discuss any contractual matters at this point in the season.

"I thought the article and everything was taken out of context. A big part," Kristaps Porzingis said. "But it is what it is. He made those comments and right now I really want to focus on the game, really. Just during the season I don't think this is the right time to talk about things like that."

Janis Porzingis also seemed to suggest in the translated version of his interview that Carmelo Anthony, who has since been traded toOklahoma City, could have done more as a leader to prevent some of the issues that were bothering Porzingis. Anthony took the high road amid direct and indirect criticism from then-Knicks president Phil Jackson and amid consistent trade rumors.

Kristaps Porzingis disagreed with the idea that his brother was being critical of Anthony and said the comments wouldn't impact his relationship with Anthony.

"Me and Carmelo, we have a great relationship no matter," he said. "It's taken out of context. A lot of that stuff, it's not how he meant it. Me and Melo, we know what kind of relationship we have. I'm not worried about that."

The relationship between Porzingis and the organization fractured in the offseason after Porzingis' skipped exit meeting and the Knicks talked with other teams about potential Porzingis trades.

Porzingis has said that he entered this season with a fresh approach, leaving those issues in the past. He echoed those thoughts on Friday, saying he is happy with how things have gone this season. .

"I've been really just trying to focus on playing basketball, being who I am and not bringing all that stuff from last year or just drama in general into this," he said. "I think that's an important thing for me going forward also -- just having that mindset of doing what I need to do on the court and that's it." 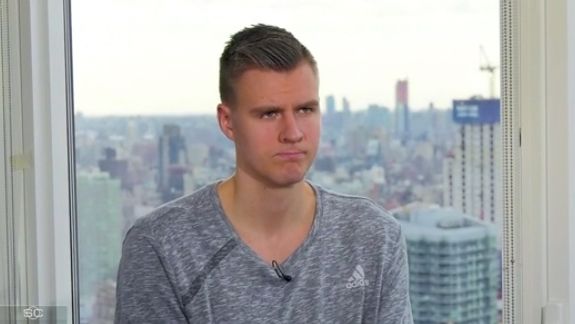 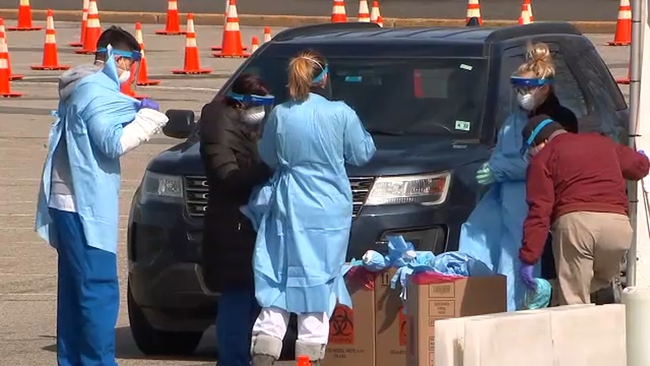