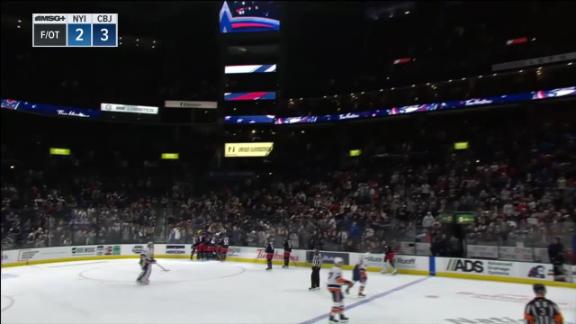 COLUMBUS, Ohio -- - Patrik Laine scored at 1:49 of overtime to lift the Columbus Blue Jackets over the New York Islanders 3-2 on Thursday night.

Laine skated into the left circle and delivered a wrist shot that sent him tumbling to the ice and beat goalie Ilya Sorokin.


"(Laine) has one of the best shots in the world, and he's a threat no matter where he is," Columbus forward Jakub Voracek said.

Blue Jackets' 18-year-old rookie Cole Sillinger got his first NHL goal late in the third period, 33 seconds after Boone Jenner scored on a power play to tie the game.

Mathew Barzal answered early in the third period for the Islanders to even the score at 2.

Elvis Merzlikins made 28 saves as Columbus improved to 3-1. Oliver Bjorkstrand had three assists.

"I liked that when they tied it, I felt we picked it up in the third instead of kind of shrivel," Columbus coach Brad Larsen said.

The Blue Jackets had played a terrible game Tuesday night, losing to 4-1 in Detroit.

"It was a little bit of a fire drills sometimes for us, but we battled through it, and Elvis was good for us again tonight," Larsen said. "But the response was good. We played better."

Scott Mayfield also scored and Sorokin had 24 stops for the Islanders, who dropped to 1-3.

"We haven't had a complete effort for sure, but will give some props to our group in the third battling back," Islanders coach Barry Trotz said. "That can be really disheartening having a real strong second period like we did, then being on the wrong side of the score."

After a scoreless first period, New York got on the board at 10:35 of the second when Mayfield intercepted a clearing pass in the Blue Jackets zone and found space between Merzlikins' pads.


The Islanders dominated the second until the two-minute mark. That's when Jenner tied it on a power play, deflecting Voracek's shot from the point over a screened Sorokin. Columbus followed up with Vladislav Gavrikov's quick pass from behind the goal line to set up Sillinger.

Barzal tied it with his second goal of the season, a wrist shot over the shoulder at 5:03 of the third.

The game featured the league's youngest player, Sillinger, against the oldest, 44-year-old Islanders defenseman Zdeno Chara, who is in his 24th season. Chara had played against Sillinger's father, Mike, who had a 17-year NHL career.

Cole Sillinger and Chara were on the ice together late in the game.

"He gave me a good hit, but yeah, he played against my dad and now I'm playing against him, so it's pretty cool that way," the rookie said.

Sillinger, the 12th overall selection in the July draft, said it was good to get the first goal out of the way.

"I don't think there was any pressure," he said. "I was getting chances in the game, so my main focus was to generate chances as much as I can for my team, and it was really good that one finally popped in the net there."

Larsen has been duly impressed.


"He's still got a lot to learn, but I love his game, I loved the response, how he played," Larsen said. "He was assertive, he wasn't scared, he wasn't scared one bit tonight. He led our team in shots the first period."

The Islanders played the fourth game of a franchise-long 13-game opening road trip while construction is completed on the new USB Arena in Elmont, New York. They don't play at home until Nov. 20. The Islanders are accustomed to being away from home. Pandemic policy caused them to spend nearly two months in Canada for the 2020 playoff bubble in which they reached the Eastern Conference finals.

Islanders: At Arizona on Saturday.