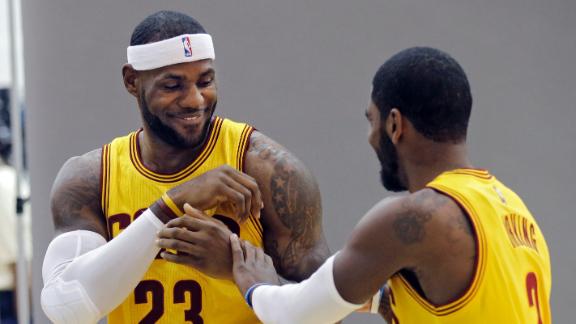 INDEPENDENCE, Ohio -- With two championships under his belt and the storybook factor of coming back home on his side, the presumption was that LeBron James would be the unequivocal top dog of Cleveland's new-look Big Three.

Instead, it turns out James is more than willing to share the spotlight, as well as when it comes time to decide which player will have the ball in his hands for the majority of the Cavaliers' possessions.

"I'll probably handle the ball a little bit, but this is Kyrie [Irving's] show," James said Saturday following the team's first practice of training camp. "He's our point guard. He's our floor general, and we need him to put us in position to succeed offensively. He has to demand that and command that from us with him handling the ball."

James split ballhandling duties with Dwyane Wade most of the time during his four years with the Miami Heat, causing Mario Chalmers often to play off the ball on offense even though he defended the opposing team's point guard on the other end.

Now, James will have another ball-dominant guard in Irving to play with, and not only is it something that he accepted in his return to Cleveland, it actually played a role in selling him on the move from Miami.

"Coming back, my [Sports Illustrated] letter kind of spoke for it, what this city and Northeast Ohio, what I mean to it. That had a lot to do with it, probably 95 percent of it. And the fact that Kyrie was here as well. That's a huge part," James said. "I've never played with a point guard like Kyrie Irving, a guy that can kind of take over a game for himself. We need it. So, that was a huge thing and that was way before we even got [Kevin] Love and signed Mike Miller and Trix (Shawn Marion) and the rest of the guys. That was very intriguing."

James' statement was less of a criticism of previous floor generals like Chalmers or Eric Snow and more of an endorsement of Irving. The former No. 1 pick out of Duke, just 22 years old, is already a two-time All-Star and coming off a summer in which he was named MVP of the FIBA Basketball World Cup in Spain.

While James has now publicly thrust the lion's share of the ballhandling duties over to Irving, at the Cavs' media day Friday, the fourth-year guard acknowledged he certainly will concede control to the four-time MVP at times.

New Cavaliers coach David Blatt, for his part, does not want his players to adhere to rigid roles in the lineup.

"I've never been one to pay particular attention to the position definition," Blatt said Saturday. "I like to play with ball guards. You could easily define LeBron as a ball guard, as well as Dion [Waiters] as well as Kyrie and others."

While James expects Irving to shoulder the load offensively, he still expects his voice to carry the most weight with his teammates.

Part of that responsibility included addressing the team before it took the court for its first practice of camp.

Love described the overall message as the team being "in a foxhole together," adding: "We just can't let anybody into the circle."

James seemed to have that sentiment in mind when he did his best to elude a question after practice when a reporter asked him why a championship in Cleveland would mean more than his two rings with the Heat.

"Why? For multiple reasons. I don't want to get too ahead of myself. I don't want to talk about it too much because then it can be used as a sound bite," James said with a knowing laugh. "You guys won't play my whole answer. So I'm not even going to get involved in that one. We got a long way to go."