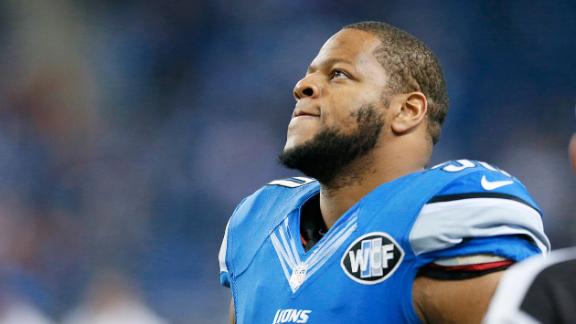 The Detroit Lions have decided against using the franchise tag on defensive tackle Ndamukong Suh.

Suh was one of the more intriguing options for the tag, because doing so would have meant spending close to $26.9 million to tie him up for the 2015 season with no guarantee of a long-term deal.

The Lions faced such a high number on Suh's franchise-tag option because of contract restructures that left him with a cap number of $22.4 million for the 2014 season, which escalated the tag number to such a high amount.

Free agency begins March 10, and Suh will be free to sign with another team if the Lions can't agree to a long-term extension with him by then.

Indianapolis punter Pat McAfee posted a humorous tweet Monday in an effort to remind Suh to think about the Colts if the defensive tackle decides to sign elsewhere.

Suh has wanted to become the highest-paid defensive player in the league. Detroit general manager Martin Mayhew was noncommittal about the Lions going that far when he spoke at the NFL combine last month.

"That's a good question. That's an excellent question," Mayhew said. "As I've said, we don't negotiate through the newspapers. I think that's part of the negotiation, so we'll keep those discussions between us and Jimmy Sexton and Suh."

At the combine, Mayhew said whether the team would use the tag was a "very fluid process" he figured would take up to the deadline day, which is at 4 p.m. ET Monday.

Mayhew and team president Tom Lewand have been confident for over a year about being able to sign Suh to a long-term deal. With the tag not being used, the Lions have a one-week window to try to get that done before Suh heads to the open market. If he does, he would be one of the most sought-after free agents since the implementation of free agency in the NFL.

The Lions GM said the deals done in the past year for Houston defensive end J.J. Watt and Tampa Bay defensive tackle Gerald McCoy provided "useful information" for the Lions to have during the negotiations.

"Those guys are both great defensive linemen in the NFL, so I think the more information, the better," Mayhew said. "I know Ndamukong is obviously a very competitive guy. Gerald McCoy is a guy who was taken directly behind him in the same year.

"So I think that's something, that when that deal gets done, that's a valuable piece of information for us in terms of the structure of that deal, the length of that deal, obviously how much money. Obviously all those things are helpful pieces of information."

The 28-year-old Suh was taken with the No. 2 pick in the 2010 draft by Detroit after an All-American career at Nebraska.

With the Lions, Suh was a dominant force in the middle for five seasons, making the Pro Bowl four times and being named first-team All-Pro four times. He has also been remarkably durable in his career, playing in 78 of 80 regular-season games for Detroit while making 238 tackles with 36 sacks, 13 pass breakups, two forced fumbles, a fumble recovery and an interception.

The Lions and Suh spent most of last offseason trying to negotiate a new contract, but Detroit halted negotiations at the start of training camp for the 2014 season because the team said it wanted to focus on football.

Suh is one of the most dominating talents in the game, but he also has a history of being fined for player-safety violations. The only two games Suh missed in his career were due to a suspension after stomping on then-Green Bay offensive lineman Evan Dietrich-Smith. Suh was initially suspended for Detroit's playoff game against Dallas this past season before the suspension was overturned and replaced with a $70,000 fine for stepping on the calf and ankle of Green Bay quarterback Aaron Rodgers.