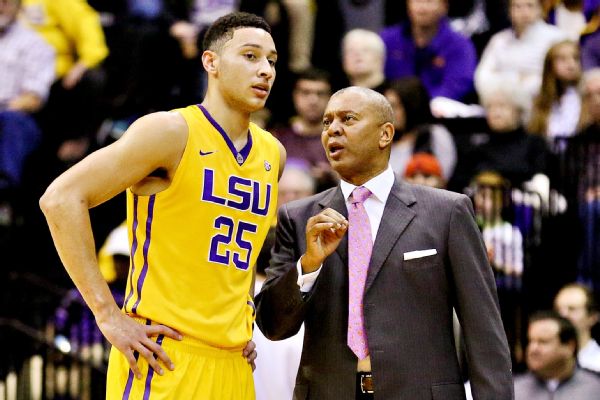 NASHVILLE, Tenn. -- TheLSU Tigersmight not have made the NCAA tournament with eventual No. 1 overall NBA draft pickBen Simmonson their roster, but don't tell Johnny Jones that his team failed last season.

"When you've got a guy like Ben Simmons and all the hype that's surrounding him, it was exciting for us," Jones said of the TIgers' 19-14 season during the SEC's media day on Wednesday. "A lot of positive things happened.

The previous nine teams that featured the No. 1 pick in that year's NBA draft -- eight were freshmen -- reached the NCAA tournament. Five of those squads advanced to the Elite Eight or beyond.

"Anything that was lacking in last year's team, you can certainly point at me," Jones said. "I'm the head basketball coach."

Jones thought his team's top-three finish in the SEC should have ensured an at-large berth in the NCAA tournament field, but LSU "just didn't have any control over that."

Injuries were a factor, as Jones said Simmons didn't have "healing power."Keith Hornsby, who averaged 13.1 points per game, missed 14games with a hernia injury.

Jones had nonconference losses to College of Charleston and Wake Forest, but he chose Tuesday to focus on the high points.

"Through it all, not much would I try to change because I thought we had a lot of success on last year's team," Jones said. "We won a lot of basketball games, was top three in the league. ... So there are a lot of positives."