Matthew Stafford shrugs off criticism: 'Don't pay too much attention to it' 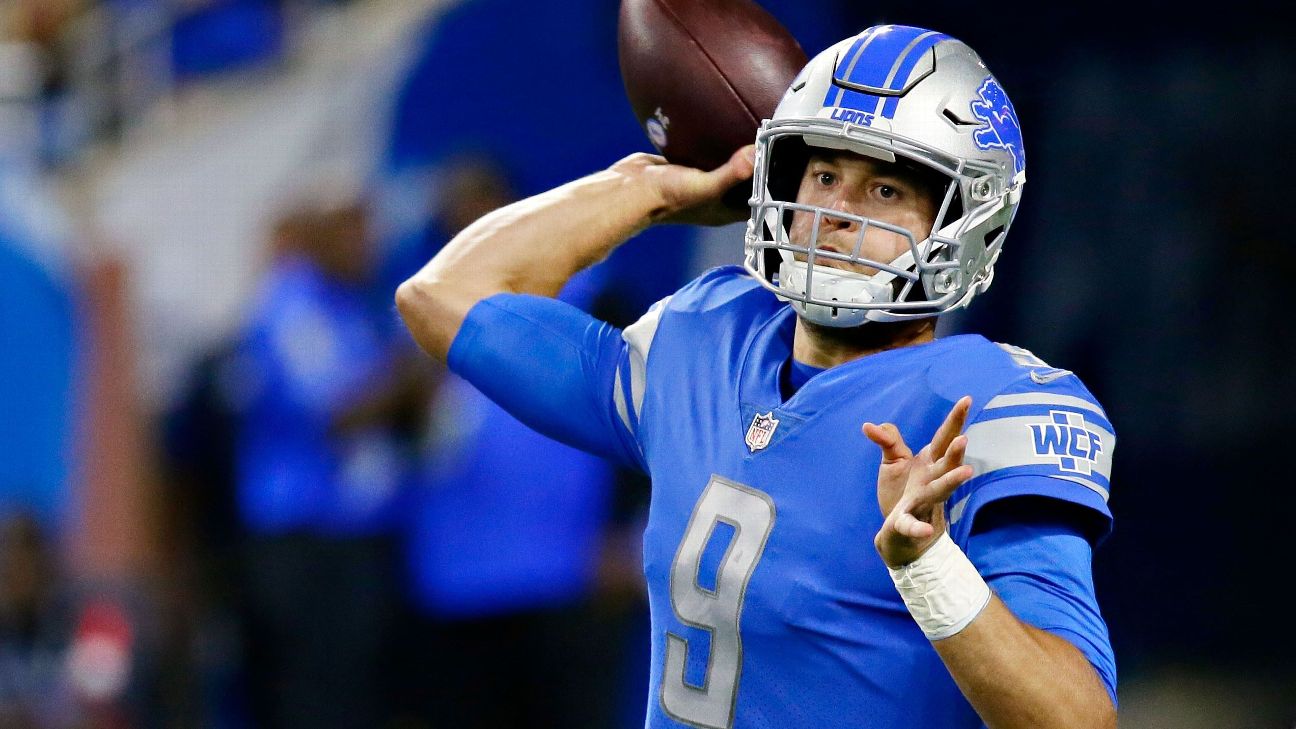 It began two days ago, when Suh posted on Instagram that Jared Goff, the current Los Angeles Rams quarterback, was the best quarterback he has ever had while joking that he couldn't sack the second-year pro.

"Jared Goff is playing pretty good right now, so I get it," Stafford said. "It's not something I'm going to waste a lot of my own time thinking about."

The deeper criticisms came Thursday on local Detroit radio 97.1 The Ticket, when Esiason appeared on the station. When he was asked about changing the culture of losing in Detroit under Matt Patricia, Esiason began speaking about Stafford -- saying he needs to do more.

"Matthew Stafford is a great quarterback. He can throw it with anybody," Esiason said during the radio interview. "I want Matt Patricia to hold him accountable, that it's not going to be all about you in the fourth quarter, son. You know, I need you to be careful. I need you to be energetic. You know, one of the reasons why I think Tom Brady screams a lot on the sideline is because I think he tries to whip himself up into a frenzy. And something, I don't see that from Matthew.

"I see a lot of Eli Manning in Matthew, like a lot of, 'It's OK.' No, it's not OK. It's your team and you have to get your guys to believe in you and that you're going to win. And I think Matt Patricia, you know, being around Tom Brady all those years, knows what the consummate professional is watching the greatest of all time and he's got to try and impart some of that wisdom on Matthew and hopefully Matthew will buy into it and he'll buy into what his coach is selling and not be a locker room lawyer and be a locker room leader and eventually that thing will turn around as long as the head coach and the quarterback get in sync and they can believe in each other much like they do in New England."

Esiason continued when asked about Stafford not ever saying much publicly about his team's struggles, again referring to Manning. In that answer, he said "staying high energy all the time for four quarters, to me, is a prerequisite of making 25 million dollars a year and playing quarterback in this league because the league is about you. It's about you and how you play and how much you get out of your teammates and that's why sometimes it's frustrating watching some of these guys that don't do it every single week and don't do it as good as Drew Brees and Tom Brady. Look, evenBen Roethlisberger's struggling this year. They've had two games where they've been shut out in the second half.

"I'm like, in this league, with these rules, are you kidding me? So there's something missing."

"Uh, not much, don't pay too much attention to it. Boomer's not in our, I respect his opinion, whatever he wants to say he can say. He's not in our locker room, not with our guys, not with me. Ever," Stafford said. "So I don't put too much credit into that. I just go about my day. Listen, guys, there's going to be people who say good things, people who are going to say bad things about us every day.

"If I spent all my time worrying about what he said or Suh posted or that, I'd be doing a disservice to the guys in the locker room and I'm trying to get all those guys and myself as ready to play as I possibly can. And worrying about all that other stuff doesn't help me do that, so I don't do it."

"I think the only thing I'll say on this whole ridiculous topic is just I'm very blessed and lucky to have Matt Stafford as my quarterback and everybody else in the league would be in the same boat," Patricia said. "He's a phenomenal quarterback. He's a great leader. He's certainly the heartbeat of our team. He's a great guy to be around."

Stafford said he isn't more vocal and doesn't make larger statements publicly because he believes things that happen within the team should stay there. It is how Stafford has been throughout his career, usually offering bland comments even when criticized or when his team has been struggling. Stafford did say he is vocal in the locker room and has no problem "jumping on" teammates when he believes it's warranted. It's just that the public will never hear about it.

"In my opinion, what I say in our locker room to our team, to our players, isn't for public consumption and that's just how I feel about it and that's probably not going to change," Stafford said. "That's who I am. That's how I feel this game should be played. We're in that locker room for a reason. We're a part of the team."