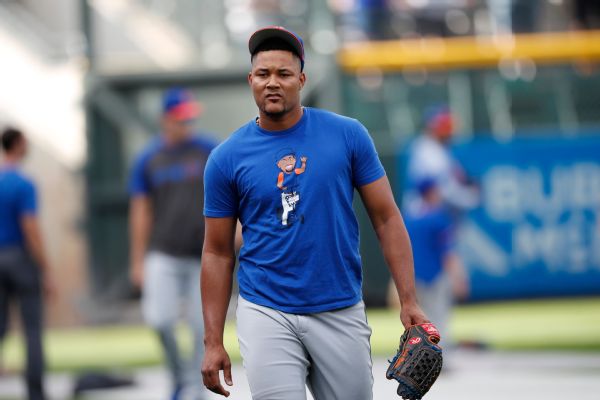 "I was really overweight," the 30-year-old right-hander said through a translator. "Most seasons I'd be around 240, 245, so I didn't realize I had gotten that far up in weight. I just wanted to come back and be at the same weight I was for the rest of my career.

"My body feels different, and everything feels a little easier. The most important for me is the balance -- you don't have all that weight on top of you. You're able to finish better and the way you want."

He said rice and fried foods were his problem.

"It was really a lot of Dominican food and all the good stuff that I had to cut out," Familia said. "In the first two weeks, I had a lot of temptations, but after that I kind of got into a routine."

An All-Star who had 57 saves for Seattle in 2018, the 165-pound Diaz was acquired from the Mariners along with second baseman Robinson Cano. Diaz struggled with his slider and went 2-7 with a 5.59 ERA and 7 blown saves in 33 chances. He lost the closer's job, and the Mets suggested he consider looking at his diet.

The organization sent him a nutritionist, strength and conditioning coaches and trainers.

"They just went ... to give me some advice and recommendations. I had my personal chef prepare certain meals for them to see if they were OK," Diaz said through a translator. "I decided to listen to them. I feel healthier, have more energy and I think it's been good for us."

Diaz, who turns 26 next month, has worked with former Mets ace Pedro Martinez in an effort to get a grasp on the slider.

"It wasn't anything we changed significantly. It was the minor adjustments we needed to make," Diaz said. "I do feel good about it going into the season. We haven't had any problems throwing it where we want to throw it."
Report a correction or typo
Related topics:
sportsespnnewsmlbedwin diaznew york metsjeurys familia
Copyright © 2021 ESPN Internet Ventures. All rights reserved.
More Videos
From CNN Newsource affiliates
TOP STORIES