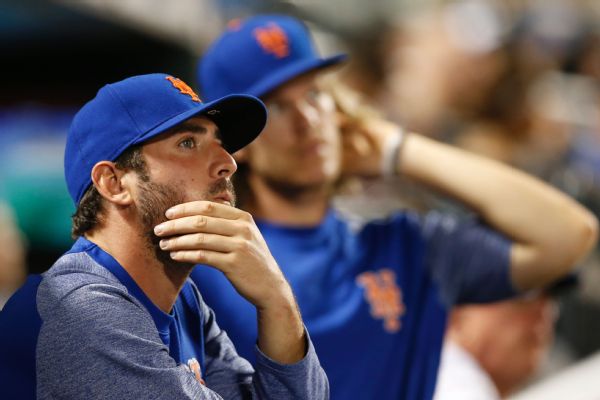 Starter Zack Wheeler was the only Mets player who exchanged salary figures with the team. He asked for $1.9 million, and the club offered $1.5 million.

While many of his Mets rotation mates got hurt or hit hard last year, deGrom ($7.4 million) was a rock all season for a team that finished 70-92. He went 15-10 with a 3.53 ERA in 31 starts, emerging as the staff ace with Syndergaard injured.

The 2014 NL Rookie of the Year, deGrom ranked second in the National League with 239 strikeouts last season and fifth with 201 1/3 innings -- 81 more than any other New York pitcher. He set career highs in both categories, as well as wins, though his ERA was his highest in four major league seasons.

The 29-year-old right-hander earned $4.1 million last season, and the Mets might consider giving him a multiyear contract at some point. He can become a free agent after the 2020 season.

Perhaps no injury was more damaging and deflating to the Mets last year than Syndergaard's torn lat muscle on April 30. The fireballing ace returned in late September for some brief work at the end of a lost season, finishing 1-2 with a 2.97 ERA in only 30 1/3 innings.

After bulking up during the previous winter, Syndergaard altered his workouts this offseason under the supervision of Eric Cressey, a performance coach who assisted Corey Kluber and Max Scherzer, and Shane Rye, co-founder of Cressey's company.

The 25-year-old Syndergaard has high expectations for the Mets entering this season.

"I think it's going to be an awesome year, a lot of fun competing against other guys in our division,'' Syndergaard told The New York Post. "I'm pretty confident we'll come out on top.''

It was his second consecutive rough season following a successful comeback in 2015 from Tommy John surgery. Harvey's 2016 campaign was cut short when he had a rib removed during surgery for thoracic outlet syndrome, a compression of nerves in the area between the neck and armpit. He and the Mets hoped that procedure would help him regain his All-Star form, but Harvey regressed even more last year.

The right-hander also was suspended by the team for three days in May after skipping a home game following a late night on the town -- yet another personal transgression in a career filled with tabloid-fodder drama.

Harvey, who turns 29 in March, can become a free agent after the season, so this might be the final Mets go-around for a polarizing starting pitcher who once appeared destined for greatness.

Familia ($7,925,000) served a domestic-violence suspension at the start of last season and missed a large chunk of time because of a blood clot in his right shoulder.

Familia had surgery in May to repair a blocked artery near his right armpit and didn't return until late August. He finished 2-2 with a 4.38 ERA and six saves in 26 games while earning a salary of $6,694,672. He can become a free agent after this season.

The 28-year-old Familia saved 94 games for New York from 2015-16. He was an All-Star in 2016, when he set a club record with a major league-best 51 saves. The Mets are counting on him to regain his form this year and once again help anchor a bullpen that was one of baseball's worst last season.

Wheeler returned to the mound last year after missing two seasons because of Tommy John surgery. The righty got off to an encouraging start but faded fast and finished 3-7 with a 5.21 ERA in 17 starts covering 86 1/3 innings.

Wheeler lost his last five decisions and didn't pitch after July 22 because of a stress reaction in his right arm. His salary was $800,000.