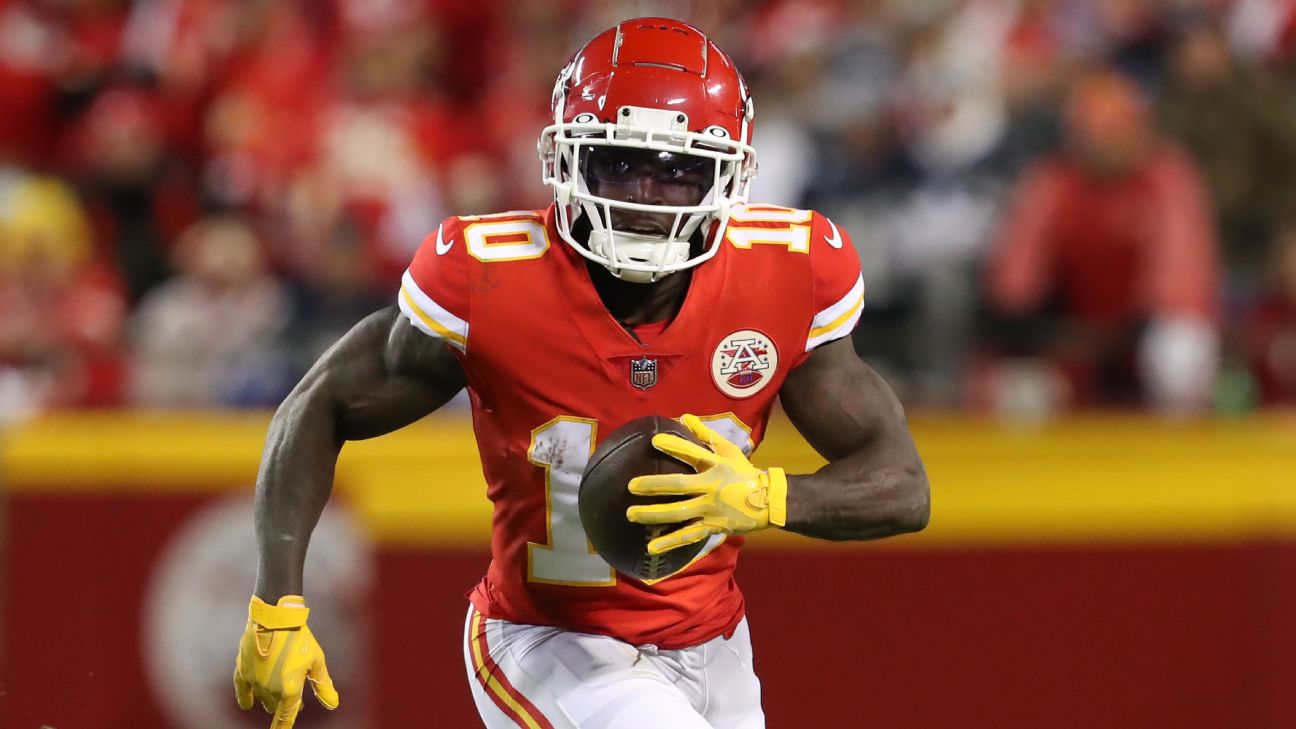 The Kansas City Chiefstraded six-time Pro Bowl wide receiver Tyreek Hill to the Miami Dolphins for five draft picks: a 2022 first-round pick (No. 29), second-round pick (No. 50) and fourth-round pick, plus fourth- and sixth-round picks in the 2023 draft on Wednesday.

The trade is pending a physical, the Dolphins said.

The deal makes Hill the highest-paid wide receiver in NFL history. The $72.2 million total becomes fully guaranteed at the start of the 2023 league year. The three-year total of the deal is $72.5 million.

Both the New York Jets and the Dolphins had trades in place for Hill, according to sources. The question became where Hill wanted to become the wide receiver with a record-breaking deal.

The Jets' trade offer to the Chiefs for Hill -- which Kansas City would have accepted if the wide receiver had opted for New York -- did not include a first-round pick but rather multiple picks that were commensurate to the Dolphins' offer based on the draft value chart that teams use, sources told ESPN. The Chiefs would have gotten picks No. 35, 38 and 69 while the Jets would have gotten Hill and pick No. 103.

Davante Adams was the highest-paid wide receiver for a week after he signed a five-year contract with the Las Vegas Raiders that averages $28 million per season and includes $65.67 million fully guaranteed.

In a statement posted to Twitter, Hill wrote: "Today starts a new beginning. I'm very excited to be joining the Miami Dolphins and get to work, however it's hard thinking about the memories, people and fans that made my time in Kansas City so great."

He also thanked those who joined him in giving back to the community in Kansas City through his foundation and thanked the Chiefs "for believing in me."

"I worked hard every day to show my appreciation for you taking a chance on me. To Coach (Andy Reid), Coach (Eric) Bieniemy and Coach (Greg) Lewis, thank you for what you have taught me not only about football but about life," he wrote.

Finally, he thanked his now former Chiefs teammates and the fans, ending his message by writing, "Kansas City will always hold a special place in my heart!"

It's the second major move made this week by the Dolphins to boost their offense that will be installed by new head coach Mike McDaniel. On Tuesday, the Dolphins agreed on a five-year deal with left tackle Terron Armstead that is worth up to $87.5 million, a source told ESPN, locking up the services of one of the top free agents of the 2022 cycle. That deal includes $43.37 million in guaranteed money, the source said.

Dolphins assistant general manager Marvin Allen was the Chiefs' director of college scouting for five years, from 2013 to 2017, when Kansas City drafted Hill.

Hill, who has been selected to the Pro Bowl in all six seasons of his NFL career, had a career-best and franchise-record 111 receptions for 1,239 yards and nine touchdowns for the Chiefs last season.

He has 479 receptions for 6,630 yards and 56 touchdowns in his career. He is one of four players since 1970 with at least six touchdown catches in each of his first six NFL seasons, according to ESPN Stats & Information research. The others are Randy Moss, Larry Fitzgerald and Marvin Harrison.

The Chiefs drafted Hill in the fifth round of the 2016 draft, a year after he pleaded guilty to domestic abuse as part of a plea agreement and was given three years' probation. In December 2014, Hill was charged with choking and punching his pregnant girlfriend. He was thrown off the football team at Oklahoma State and eventually transferred to West Alabama.

Then, in March 2019, Overland Park (Kansas) police were called to Hill's home to investigate an alleged battery in which a juvenile was a victim.Hill was not listed in the police report. Hill's fiancée, Crystal Espinal, was listed under "others involved." The Johnson County (Kansas) District Attorney's office, however, announced in August 2019 that it declined to file charges against Hill or Espinal.District Attorney Stephen M. Howe said that although he believed a crime occurred, the evidence in the case didn't clearly establish who had committed it.


The Chiefs still are expected to add wide receivers in free agency and the draft.

"It's hard to put into words what Tyreek has meant to Chiefs Kingdom over the last six years," Chiefs general manager Brett Veach said in a statement. "He's a special player, one of the best in franchise history. He's been a large part of our success, including our Super Bowl championship run. This decision was incredibly difficult, but we felt it was a necessary move in the best interest of the team, and also for Tyreek. We wish him the best as he continues his career."

Reid said in a statement that he was happy for Hill.

"I am happy for Tyreek, he has grown as a man and player here in Kansas City," Reid said in a statement. "Myself, my staff and our organization appreciate all he did for our team. This move will also benefit the Chiefs, we now have cap space and additional draft picks to grow as a football team. I wish him well as he moves forward."

Since Patrick Mahomes became the Chiefs' starting quarterback in 2018, he had linked up with Hill for 41 touchdowns, the second most by a QB-receiver duo in that time, according to ESPN Stats & Information research.

With the exception of tight end Travis Kelce, 32, who signed a four-year extension in 2020, all of the big-money contracts the Chiefs have given out since Veach became the team's general manager have gone to players in their mid-20s. 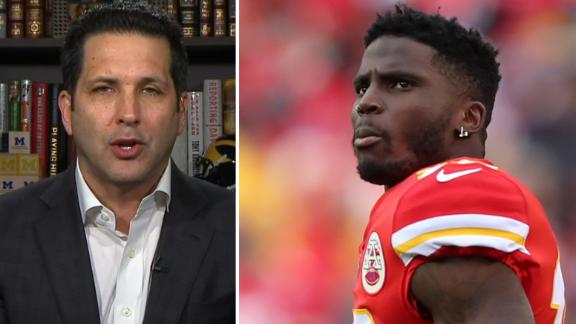 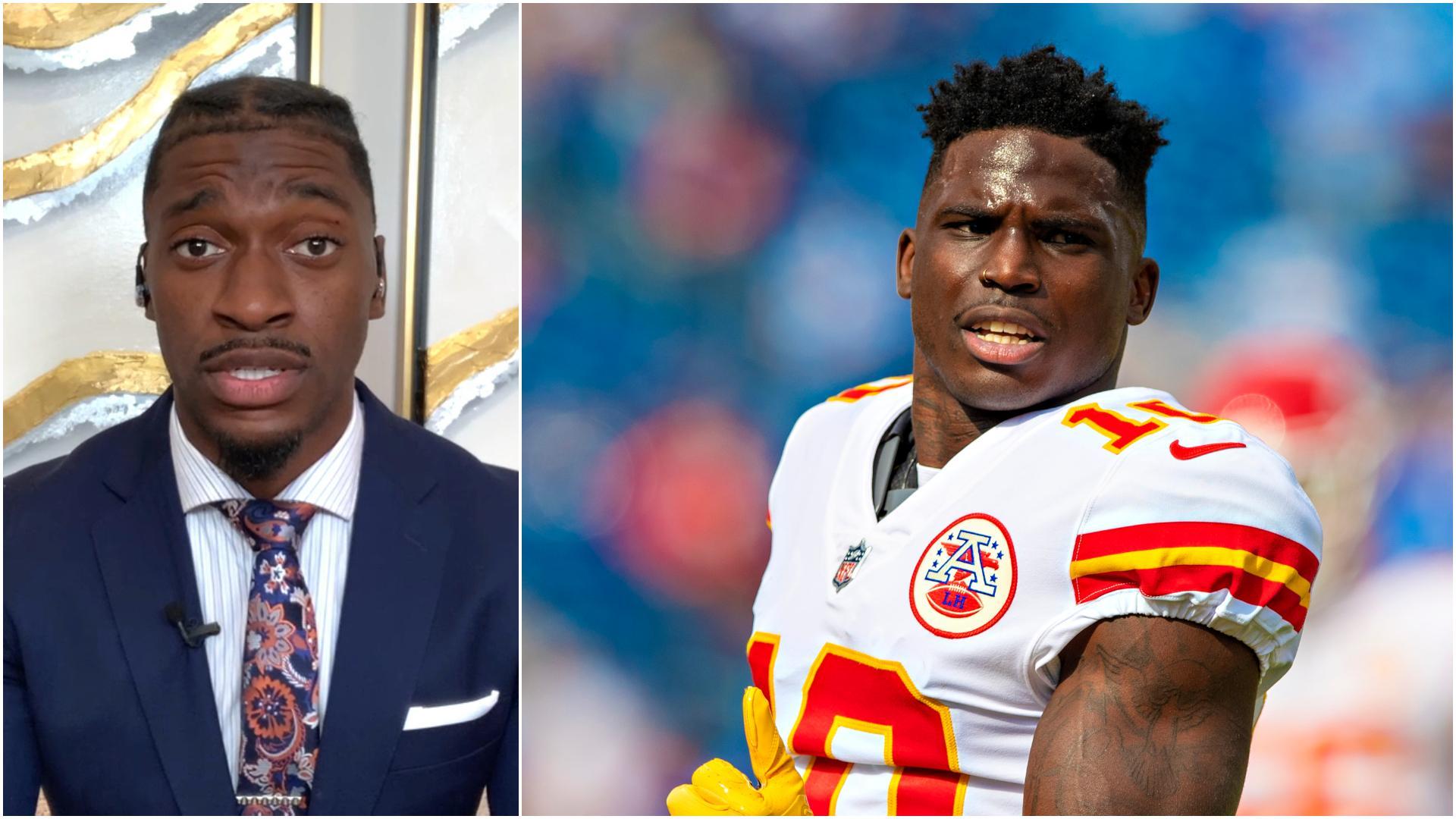