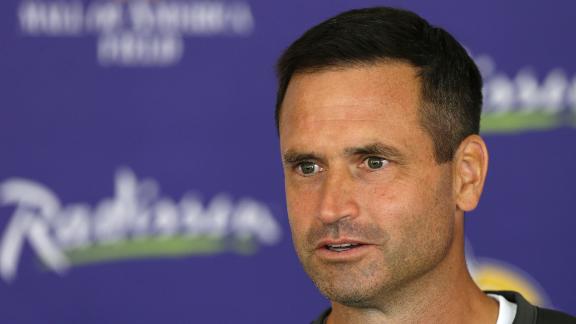 MANKATO, Minn. -- Saying he's learned a "hard lesson," Minnesota Vikings special teams coordinator Mike Priefer apologized on Thursday for the homophobic remark he made during the 2012 season, while coach Mike Zimmer and general manager Rick Spielman stood behind the coach the organization decided to discipline instead of fire.

Priefer will be suspended for the first three weeks of the 2014 regular season, and will not be allowed to have contact with the team during that suspension, Spielman said on Thursday. He will attend a week of sensitivity training and could see his suspension reduced to two weeks if Vikings ownership determines he is ready to return.

"I'd like to start off by saying that I like to set a higher standard for myself: a higher standard of conduct, a higher standard of work ethic, a higher standard of being a father and a husband and I expect a lot from my players as well," Priefer said. "My wife and I raise our children this way in terms of our last name and what that means. Remember who you are. In this regard, in this situation, with my comment, I failed. I didn't just go below the bar. I went way below the bar. I made a mistake. I was wrong. I brought a lot of undue attention to the Minnesota Vikings organization and brought an unwanted distraction, and I apologize. The apology that I spoke about, that I put out on Friday, I want to reiterate that in a very humble and sincere manner."

The Vikings largely declined to discuss the specifics of their decisions not to fire Priefer and not to release the full report from a six-month independent investigation of former punter Chris Kluwe's allegations. Kluwe, who alleged in a Jan. 2 Deadspin.com piece that he was subjected to repeated homophobic remarks from Priefer and released in May 2013 because of his support for same-sex marriage, has threatened to sue the Vikings for human rights and religious discrimination, defamation and "tortious interferences with contractual relations," but attorney Clayton Halunen said on Wednesday the Vikings had agreed to restart settlement talks. As of Thursday afternoon, Kluwe tweeted, those talks had resumed.

The team commissioned the law firm of Littler Mendelson to produce a 29-page summary of the independent investigation, which it released last Friday. That summary showed Priefer had denied making a homophobic remark the first time he met with investigators in January, but admitted it in May, after long snapper Cullen Loeffler corroborated Kluwe's initial allegation, saying he remembered Priefer saying something about "putting all the gays on an island and nuking it." The summary did not show support for Kluwe's allegations that Priefer made additional homophobic remarks, and Loeffler said both he and Kluwe laughed at the comment when Priefer made it.

Neither Priefer nor Zimmer would discuss whether the special teams coordinator admitted making the remark before Zimmer decided to keep Priefer on his staff, though both said they did discuss the situation while Zimmer was deciding whether or not to retain Priefer. In the six months he's worked with Priefer, Zimmer said, he's learned that the coach shouldn't be defined by one comment.

"I knew about him as a person and I knew his father," Zimmer said. "His father [Chuck Priefer] was a good coach in this league. We all make mistakes. We all try to learn from our mistakes. And I think this guy is a very high-character, quality person that I want to stand behind. Honestly, I want to stand behind him because I know what is inside of him, I know what's in his heart. And he made a mistake, and if anyone here hasn't made a mistake, I want you to raise your hand, because I know I've made plenty."

Spielman said he and Zimmer will consider all their options for the three weeks Priefer is away, and didn't rule out the possibility of hiring an interim special teams coordinator.

"I think we're pretty close to having an idea of what we want to do," Zimmer said.