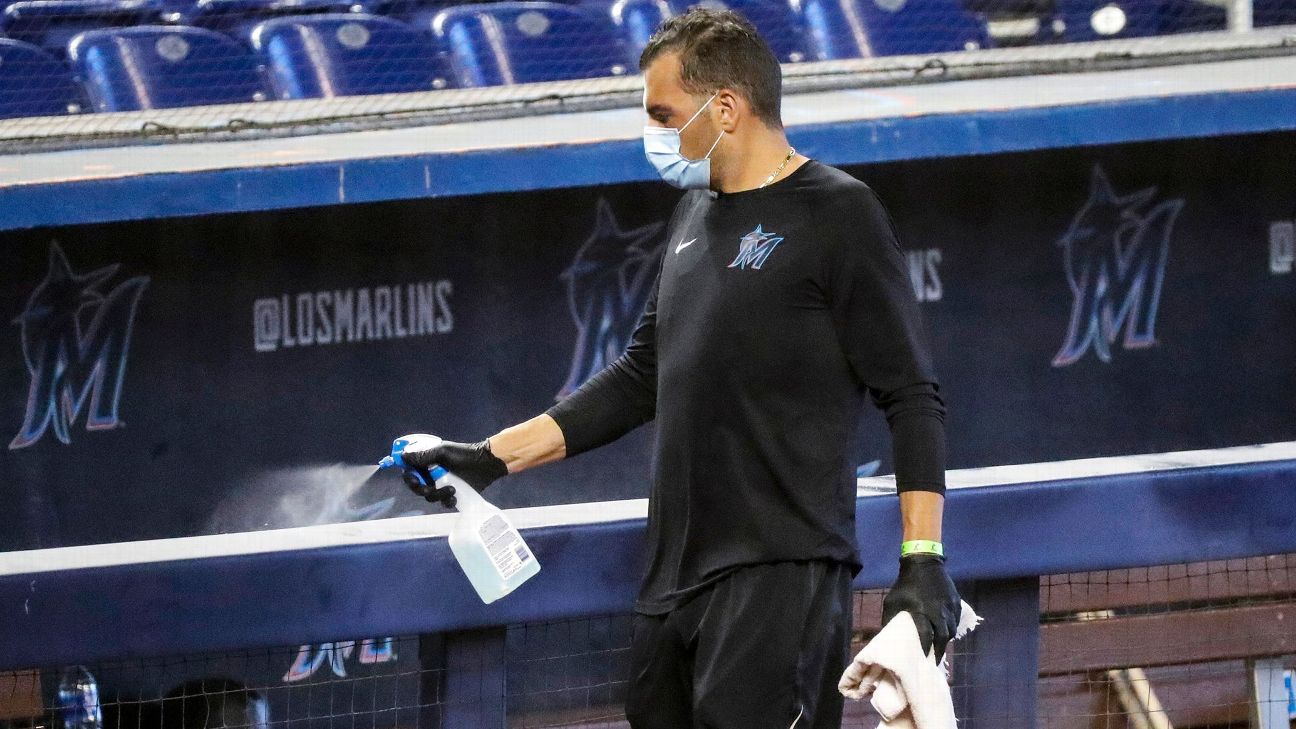 It didn't take long for the reality of the coronavirus pandemic to affect the restart of the 2020 Major League Baseball season.

In just the past five days, we've seen more than a dozen postponements or schedule shifts, affecting eight different teams.


It can be difficult to keep track of, but here's how the week has gone down so far, starting with Sunday's prelude to the first postponements on Monday.

Ninety minutes before the first pitch of the finale of a season-opening series between the Miami Marlins and Philadelphia Phillies at Citizens Bank Park, the Marlins announce that right-hander Jose Urena has been scratched from his scheduled start. No reason is given at the time, but later it is learned he is among four Marlins players who tested positive for COVID-19. The teams elect to play despite Urena's unavailability, and the Marlins win the game 11-6; later, Miami postpones its flight home.

With the Marlins quarantined in Philadelphia, Miami's home opener against the Baltimore Orioles is postponed, as well as their scheduled game on Tuesday. At this point, the Marlins have at least 11 players and two coaches who have tested positive.

The Phillies' game against the New York Yankees is also postponed -- "out of an abundance of caution," according to MLB -- as Philadelphia awaits the results of its own set of coronavirus tests.

After four more Marlins team members test positive -- bringing the total to at least 17 -- MLB announces that all of Miami's games will be suspended through Sunday. This includes a three-game weekend set against the Washington Nationals. A majority of Nats players had voted against playing the Marlins earlier in the day, according to ESPN and multiple reports.

"We continue to take this entire situation very seriously," Marlins CEO Derek Jeter says in a statement. "All of our players, coaches and staff are, understandably, having a difficult time enduring this experience. After receiving additional test results on our Major League team this morning, we reached out to the Commissioner's Office with concern for the health and safety of our team as well as our opponents."


In addition, the remainder of the Yankees-Phillies series -- a four-game home-and-home set in Philly and the Bronx -- is postponed after an attendant for the visiting clubhouse at Citizens Bank Park tests positive. Instead, the Yankees travel to Baltimore for a pair of games against the Orioles.

In an update to its health and safety protocol, MLB, among other measures, announces it will require every team to travel with a compliance officer to ensure players and staff properly follow the league's rules.

The league also cancels Friday's scheduled game between theToronto Blue Jaysand Phillies, with the status of the rest of the weekend series pending additional test results.

The Phillies cancel all activities at Citizens Bank Park, and their weekend series against the Blue Jays is postponed, after a member of the coaching staff and a member of the home clubhouse staff test positive for COVID-19. No Phillies players have tested positive to date.

This leaves the Blue Jays -- who the Canadian government denied use of Rogers Centre this season due to travel restrictions, and who can't yet play at their alternate site, Sahlen Field in Buffalo, home of the club's Triple-A affiliate Buffalo Bisons, since it isn't ready -- temporarily homeless. The Jays decide to remain in Washington, where they have completed a "home" series against the Nats.

"Our plans right now are to stay put and let MLB work through whatever they're working through," Toronto manager Charlie Montoyo says. "We're not going to Philadelphia. Those games have been postponed. ... We're going to talk to the Nationals, see if we can work out here. If they say yes, we'll stay and work out until MLB tells us where to go next."

"We are supportive of Major League Baseball's decision to postpone today's game and look forward to playing our home opener as soon as conditions safely allow," Brewers president/general manager David Stearns says in a statement. "The health and safety of our players and employees are, and will continue to be, our top priorities."

Could all this jeopardize the entire season? Friday, Manfredtold MLB Players Association executive director Tony Clark that it could.

Postponed games:Cardinals at Brewers were postponed again, this time after at leastfour more Cardinals tested positive for COVID-19.The Cardinals' positives represented the first positive tests for baseball outside of the East Coast since the regular season started last week.

The Brewers also announced that center fielder Lorenzo Cain decided to opt out for the remainder of the 2020 season:

Earlier in the day, Marlins infielder Isan Diaz became the first Miami player to opt out. He was not among the 21 members of the Marlins' traveling team to test positive in the past week. 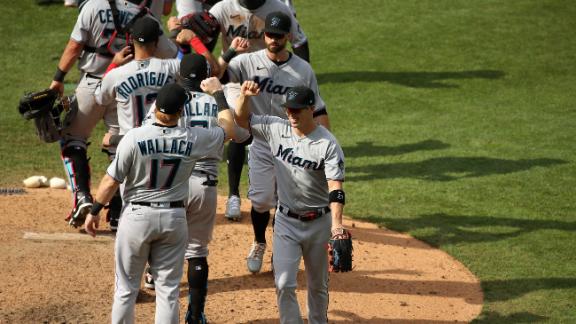 The logistical challenges MLB faces with so many canceled games
Jeff Passan outlines how MLB plans to reschedule the games that have been postponed, which includes teams not playing all 60 scheduled games. 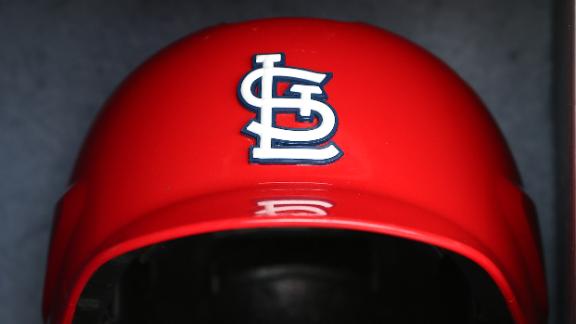 When is it time for MLB to cancel the season?
Jessica Mendoza wonders if MLB should keep playing after the Cardinals reported multiple positive tests for the coronavirus. 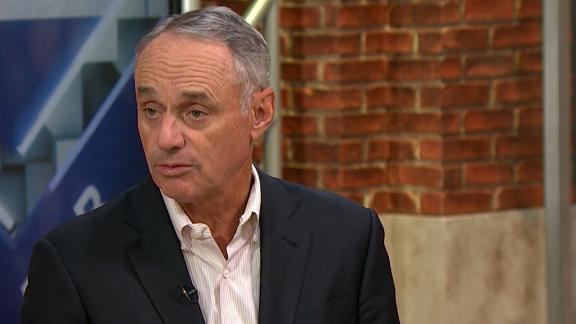 Manfred: 'We think we can keep people safe and continue to play'
Rob Manfred isn't putting the Marlins' coronavirus situation in a "nightmare" category, but he does say there is a point that would cause MLB to shut down part, or even all, of the schedule. 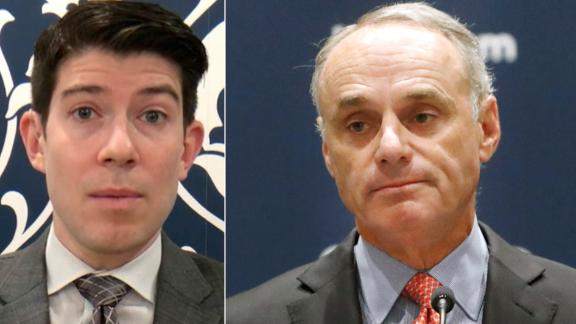 How is MLB reacting to Cardinals' positive tests?
Jeff Passan explains how cautious MLB needs to be now that multiple members of the Cardinals have tested positive for the coronavirus. 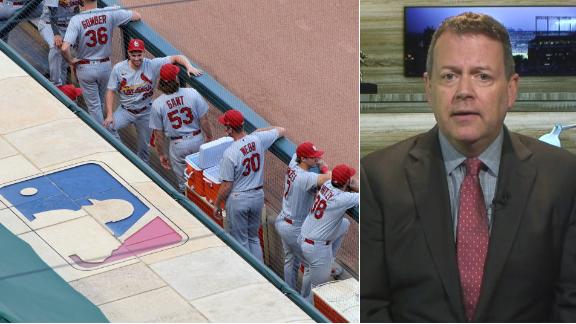