MLB trade deadline breakdown: Biggest names, surprises and what it all means for October 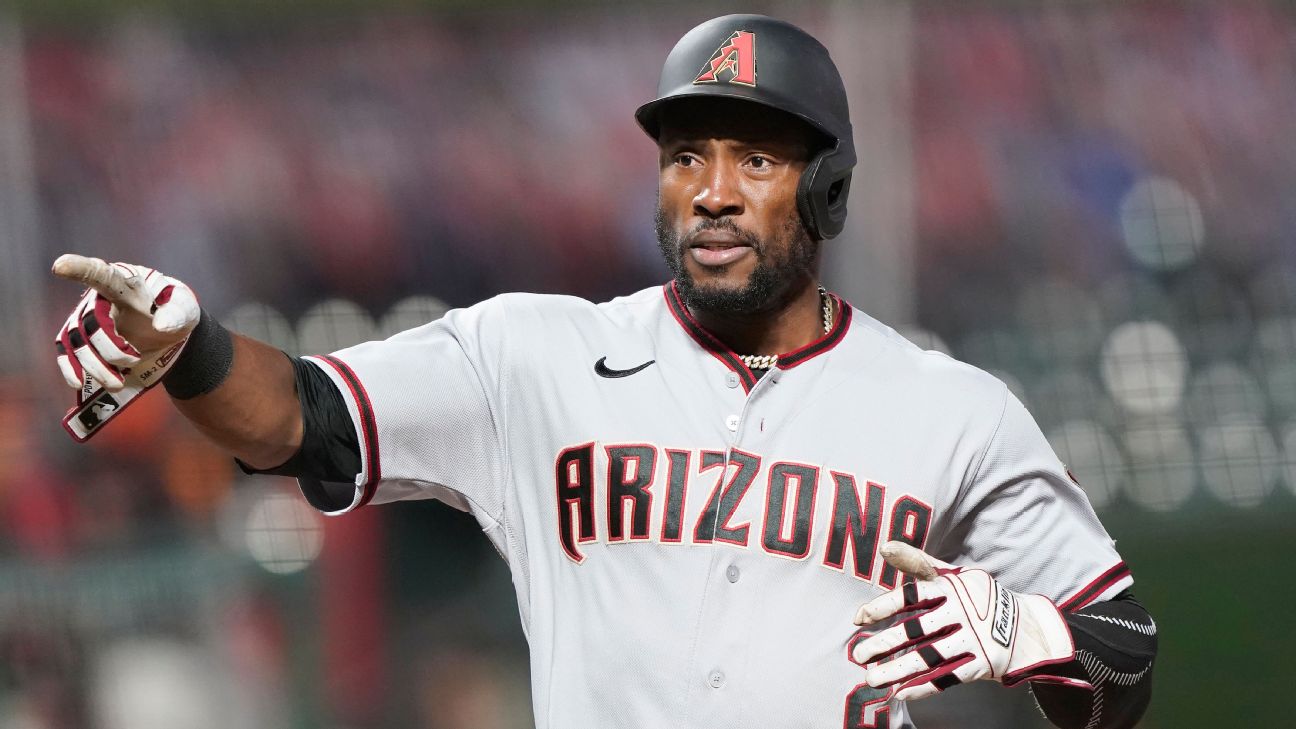 The San Diego Padres stole the headlines by dealing for Mike Clevinger on a deadline day that lagged behind other recent ones in overall volume of moves. But that doesn't mean the trades that went down this year won't have a major impact on this October, the 2021 season and beyond. So what happened and what does it mean?

Aside from Mike Clevinger, who is the biggest October difference-maker who moved this week?

Sam Miller:I could use a clue here: Will Mike Minor's fastball velocity (90.6 mph this year, down from 92.6 last year) start ticking back up? If so, the A's are truly a force to fear in the playoffs, with one of the league's best bullpens, best lineups and enough starting pitching depth to (hopefully) find three hot starters at a time. If not, I'm still nervous. The A's starters have been very shaky this year, and the club's playoff-worthy record could be traced to the season's wildly unbalanced schedule: Oakland has faced only one opponent with a winning record this year.

David Schoenfield:It's probably not going to be Robbie Ray -- but it could be Robbie Ray. He's been absolutely terrible this year -- he leads the NL in earned runs allowed even though he hasn't even pitched enough innings to qualify for the ERA list -- but maybe he finds his control and gets in a groove. He's done it before in bursts: a 2.20 ERA in September of 2018, a 15-start stretch in 2017 when he had a 1.94 ERA. You never know.

Joon Lee:Aside from Clevinger, Starling Marte is by far the best player traded, but I'm not sure the Miami Marlins have much of a shot to make it very far in October. Obviously crazy things can happen in a season where teams need to play well for only two months to make the postseason, and the Marlins -- despite a clubhouse COVID outbreak -- have hung in there to this point.

Which deal surprised you the most?

Schoenfield:Give Seattle GM Jerry Dipoto big props for turning 30-year-old Austin Nola, a player he signed last year as a minor league free agent, into a top-100 prospect in outfielder Taylor Trammell. Yes, Trammell's stock has dropped after a lukewarm 2019 in Double-A, but there are still tools and upside there. The Mariners also got a useful utility player in Ty France -- he hit .399 in Triple-A in 2019 -- and Andres Munoz, who was throwing 100 before undergoing Tommy John surgery. Feels like the Padres gave up a lot for a couple of role players in Nola and reliever Austin Adams. (To be fair, Nola is third among MLB catchers in WAR since he was called up last year, so maybe it's the Padres who are getting the steal.)

Miller:I'm surprised by the return for Clevinger. In Normal Times, with three postseasons remaining on Clevinger's contract, you'd probably expect three exciting names going the other way. This one has ... maybe one, in Gabriel Arias? Cleveland might end up getting a lot out of this package, so I'm not calling it a bad deal. But it's unusual to see a pitcher at that tier get traded without every big name in prospectdom first being attached in a trade rumor for him.

Lee: I was surprised to see the A's land Minor, who has struggled in following up the best season of his career in 2019, but it falls in line with the shrewd moves Billy Beane seems to pull off year after year. Moving to the Oakland Coliseum is good news for any pitcher, but for a team that really needs a boost in the starting rotation, buying low on a pitcher who looked like one of the best in MLB last season for two players to be named later is a low-risk move for Oakland that has the potential to pay off massively.

Which near-deal (or rumored deal) do you most wish had happened?

Miller:This specific scenario wasn't discussed (that we heard about), but Texas was reportedly shopping Joey Gallo. Meanwhile, the Rockies need help at DH/DH-adjacent positions, and Gallo could have put a huge swell in the middle of that lineup. I've been waiting almost 30 years to see an 80-grade power hitter in Colorado, and this would have been an extremely fun outcome. It would also have made a lot of sense for a franchise that might never have a better opportunity than this year.

Lee:The Reds are going for it, which is well within their rights considering the talent on their roster and the expanded postseason, but it would have been quite a game-changer for a team closer to the top of their division to acquire a top-line starter (and potential short-season Cy Young contender) like Trevor Bauer. He could have beena big piece for a team like the Los Angeles Dodgers. Given the flurry of acquisitions San Diego made to give the Dodgers the best run for their money for the division, the heat is turning up on Los Angeles to live up to their sky-high expectations.

Schoenfield:Did the Dodgers needLance Lynn? No, but he would have improved their odds -- no, not a lot since they're still the best team in baseball -- of winning the World Series in 2020 as well as 2021 (he's signed for just $9.3 million). Put it this way: Assuming Walker Buehler is the Game 1 starter in that first playoff series, would you rather have Lynn or Clayton Kershaw starting Game 2?

Which team is going to most regret sitting out the deadline?

Miller:I think the Mets could have been legit this October. They've hit terribly with runners in scoring position, which has made their offense look pretty bad, but that's been more about bad timing than about bad hitters -- overall, they've been one of the NL's three best offenses. They definitely need pitching, but while other teams went out and got that pitching, the Mets seemed caught in between, rumored to be shopping (they did acquire Robinson Chirinos, Todd Frazier and Miguel Castro) but not for luxury brands. If they'd added Clevinger or Lynn, they would have been a strong pick to knock off anybody short of the Dodgers in the NL. Now they're probably at best a first-round knockout.

Schoenfield:I'm most surprised the Yankees didn't do anything. I get it, we haven't seen this team at full health, but injuries to James Paxton and Tommy Kahnle have thinned out the depth on the pitching staff a bit. At the minimum, I thought they might add a bullpen arm. Maybe they think Deivi Garcia -- who just threw six innings with no earned runs and no walks in his MLB debut -- can make an impact down the stretch, either in the rotation or the bullpen.

Did the deadline change your playoff predictions at all?

Miller:If we're going to have a weird year, we might as well have a weeeeeeird year, and nothing could be weirder than the Marlins -- winners of no NL East titles but two World Series titles in their franchise history -- sneaking into the playoffs with a losing record, then getting hot and rolling through the postseason to win the World Series. Absolutely thrilling to see them trade for Marte. The Marlins!

Schoenfield:Look, given the obvious caveat that anything can happen in a five-game series or a seven-game series -- let alone a three-game series -- the Dodgers were the overwhelming favorites to parade through the NL with no clear No. 2 team. Now we have a clear No. 2 team in the Padres. With Dinelson Lamet looking very good, if Clevinger and Chris Paddack pitch at a high level, the Padres are a lot closer to the Dodgers than they were a week ago. And all the pressure in October will be on L.A. (I'm still predicting the Dodgers.)

Lee:The most eye-opening development this season was the Padres exceeding expectations as a young team to watch and becoming a legit potential postseason force. The moves Preller made certainly cement that status, but I don't think that changes the status of the Dodgers and the injury-plagued Yankees facing the highest postseason expectations. Given the injuries hitting the Bronx Bombers in New York, I still expect the Rays, who also stayed quiet at the deadline, to be the team to beat in the American League.

Lee: As much as the moves San Diego and A.J. Preller made before the deadline were to position the Padres to chase a World Series right now, the team also set itself up for the next few years. After building a strong farm system, Preller decided to cash in on the team's deep pool of prospects by obtaining Clevinger, who doesn't hit free agency until after the 2022 season.

Baseball fans and writers love to project out into the future, whether that's freaking out over trading a top prospect before they've touched the majors or predicting a team like the Cubs to become a dynasty after winning the World Series in 2016, but plans don't always work out. The Padres see a window to win right now with the rise of Fernando Tatis Jr. to superstardom and Manny Machado, still under 30 years old, producing in the midst of a 10-year, $300 million contract.

Miller:I agree with Joon. If the Padres would have traded for Clevinger this upcoming winter, we'd probably (rightly) hail it as the biggest addition any team would make in the offseason. Since the start of 2017, only five pitchers --Max Scherzer, Jacob deGrom, Corey Kluber, Justin Verlanderand Kershaw -- have a better ERA+ than Clevinger. He's a Game 1 starter, not just in 2020 but for the next three postseasons. And the Padres didn't really have to draw much from their young talent pool to get him.

What will be the one thing we remember from this trade deadline?

Miller:The complex logic puzzle that was required to figure out which teams were "in it." Turns out it's not that easy to figure out how many games a team is behind the league's second-best non-first-or-second-place record! It's also not that easy to compare records when one team has played 11 more games than another team! And, for that matter, it's not that easy to decide whether a team that would be only one-fifth of the way through a normal season is actually any good. Near as I can tell, the Nationals were three games out of a playoff spot on Monday morning and were looking to buy. The Diamondbacks were also three games out but had a better record and were looking to sell. I'll remember this as the trade deadline where a team might be a buyer in the third inning but a seller by the seventh.

Lee:If Clevinger doesn't break COVID protocol and lose the trust of the Cleveland clubhouse, this is by far the quietest trade deadline in recent memory, which makes sense considering the circumstances. I do think it's quite notable that we saw many teams on the edge of playoff contention making moves -- most notably the Blue Jays, Phillies and Marlins -- to make a solid push for the postseason. I'm not sure if we see the expanded playoffs make an appearance beyond this season, but it was certainly interesting to see a shift in how teams further down in the division standings operated considering this unusual year.

Schoenfield: Check back in October. Sometimes the most important trade does end up being the big one: Verlander in 2017, for example. Sometimes it's one that flies under the radar -- think Nathan Eovaldi in 2018 for the Red Sox or Daniel Hudson last year for the Nationals. Heck, sometimes it's a waiver claim (Cody Ross going to the Giants in 2010). So while Clevinger is the big name, maybe it's Austin Nola who becomes the World Series MVP when the Padres beat the Rays in seven games. 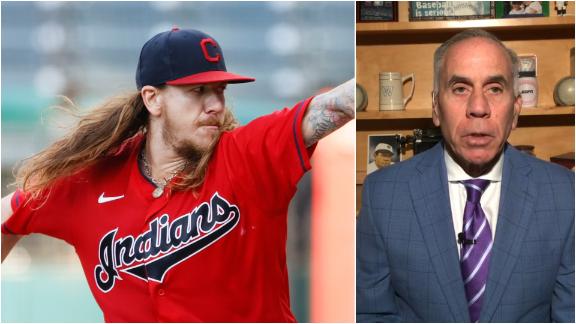 How Clevinger trade will impact the Indians
Tim Kurkjian reacts to the Indians trading Mike Clevinger to the Padres and discusses what it means for Cleveland. 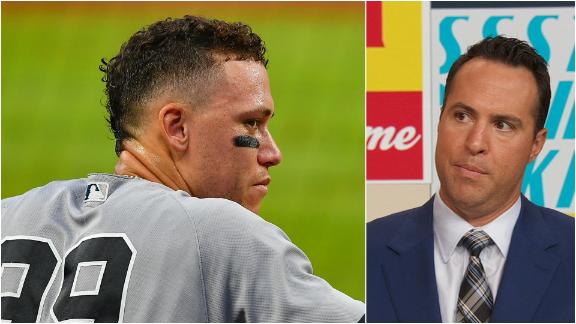 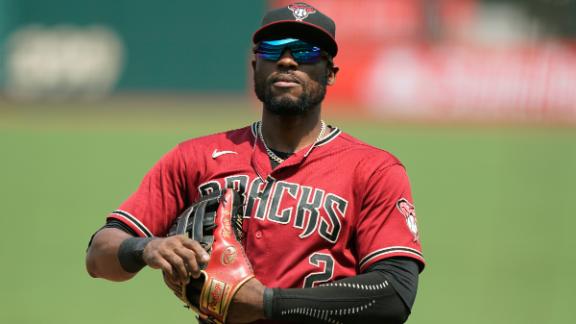