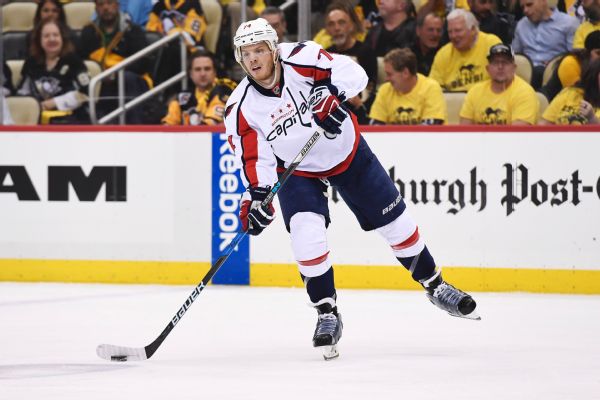 John Carlson can't forget that he is fighting for the NHL lead for points among defensemen because his Washington Capitals teammates keep razzing him about it.

"The guys do a good job of pumping that up in the locker room," Carlson said.

Carlson's 61 points have him tied with the Dallas Stars' John Klingberg, and he is a dark horse candidate for the Norris Trophy as the league's top defenseman.

"John's having just a whale of a year," teammate Matt Niskanen said. "Monster year -- production, been carrying the load all year. He's been a stalwart back there for us."

This breakout season with a career-high 15 goals and 46 assists is coming at a perfect time for Carlson, who is set to be an unrestricted free agent this summer but has been flying under the radar compared to New York Islanders captain John Tavares. Carlson command upward of $7 million per season on a deal that's almost certain to be eight years if Washington re-signs him or seven if he hits the market July 1.

The 28-year-old has outperformed the six-year contract he signed in 2012 that pays him just under $4 million a year. He has shown the ability to be a dominant No. 1 defenseman by averaging 25 minutes a game, running the point on the top power-play unit, killing penalties and drawing the toughest matchups.

A 2008 first-round pick of the Capitals, Carlson likes Washington and would like to stay if the fit is there. General manager Brian MacLellan has said he believes each side wants to get a deal done but will wait until after the season to try to make it happen.

The big question is whether the Capitals can make it work under the salary cap, which might require trades even though the ceiling is expected to go up to between $78 million and $82 million from $75 million.

Carlson might not reach the $7.875 million annual salary of Tampa Bay defenseman Victor Hedman, who along with Drew Doughty of the Los Angeles Kings is a Norris front-runner, but he might not be far off. Carlson has more of an offensive punch than San Jose Sharks defenseman Marc-Edouard Vlasic, whose new deal pays him $7 million a year, and he has almost double the points of the next-highest potential free agent defenseman, former Capitals teammate Mike Green, who's 32.

"He's always been steady," Washington goaltender Braden Holtby said of Carlson. "His role's expanded, obviously, which shows: time on ice and points and such. He's got all the tools of a great defenseman. "

Carlson isn't the only player excelling in a contract year. Here are some others:

Thirty-goal scorers get paid handsomely in free agency because they are so rarely available. Van Riemsdyk's 33 goals are 11th-most in the NHL, and the 6-foot-3, 217-pound left-winger has gotten better around the net. Van Riemsdyk, the second overall pick in 2007, has another one of the league's best bargain contracts at $4.25 million a year, which Toronto inherited from Philadelphia. The Maple Leafs have expressed interest in keeping the 28-year-old.

Undoubtedly the best pending free agent, Tavares still not having a new contract with the New York Islanders is generating buzz and whispers like Steven Stamkos two years ago. Stamkos re-upped with Tampa Bay on the eve of free agency, which Tavares could do. The Islanders will miss the playoffs for the second consecutive season and sixth time in Tavares' nine years in the league. The point-a-game player with 32 goals and 43 assists could fetch $10 million a year or more if he isn't back with New York.

The expansion Vegas Golden Knights struck gold with Perron, whose 66 points are a career high and a big reason they are leading the Pacific Division. The soon-to-be 30-year-old winger got his game back after bouncing around to four different teams the past five seasons and could easily re-sign with Vegas like teammate Jonathan Marchessault did.

Knee surgery knocked Thornton out of the San Jose Sharks' lineup in January, cutting short a season in which he had 36 points in 43 games at age 38. If Thornton shows he can still play at the top of his game when he returns, he will be in demand for another one-year contract.

Going from the New York Rangers to Boston appears to have reinvigorated Nash's game after just 28 points in 60 games before the trade. The 33-year-old power winger's contract year won't truly be judged until the playoffs, where he gets another chance to exorcise some past demons.