NBA playoffs 2021: First look at Brooklyn Nets vs. Milwaukee Bucks, a heavyweight bout in the Eas... 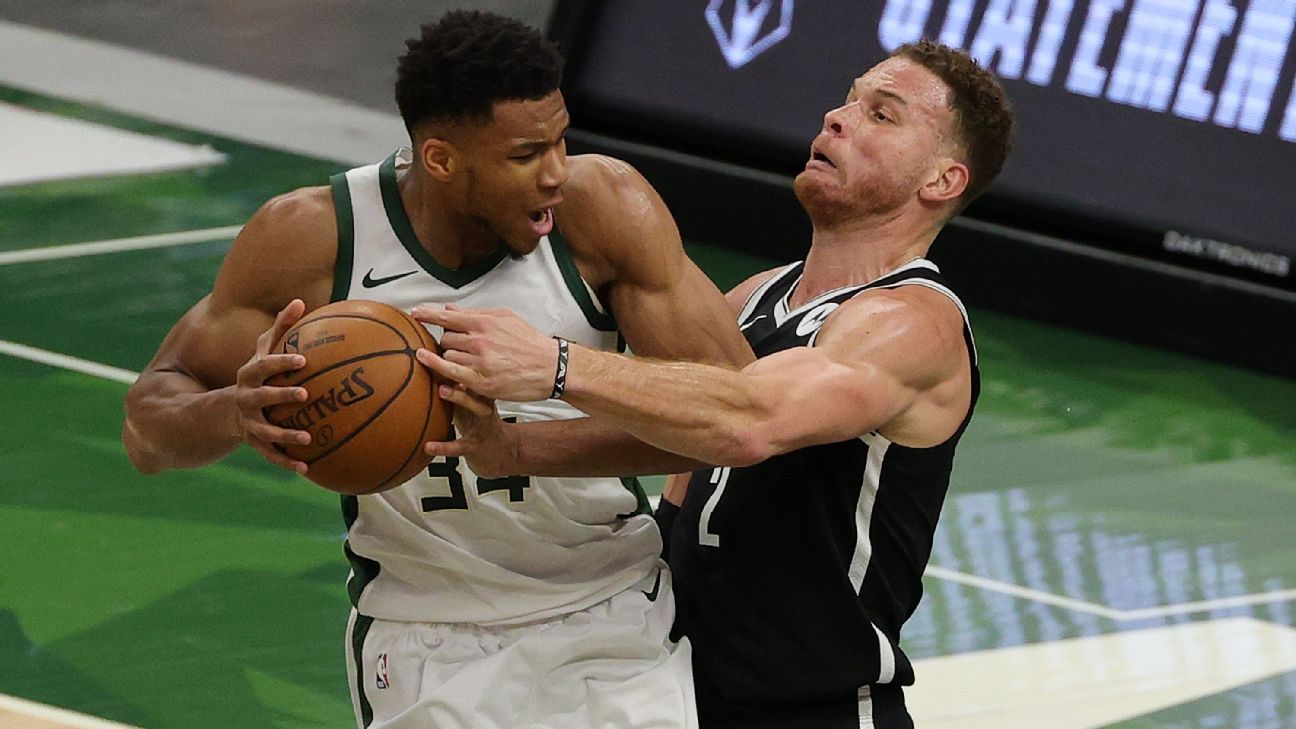 The Milwaukee Bucks have had their heels up since May 29, when they finished off their surprising four-game demolition of the Miami Heat, the team that knocked them out of the NBA playoffs last season.

This season, the Bucks survived an overtime thriller in Game 1 before going on to blow out the Heat three times in a row in the first-round series, though they did lose Donte DiVincenzo for the playoffs with a foot injury, which will make their hopes of advancing a bit more difficult.


TheBrooklyn Nets, on the other hand, dismissed the Boston Celtics in five relatively easy games, with only a stellar 50-point showing from Jayson Tatum in Game 3 preventing the series from also being a sweep. The Nets' three stars -- Kyrie Irving, Kevin Durant and James Harden -- look healthy and are playing great, and they now have a few days to prepare for their showdown with the Bucks.

How those three match up against Milwaukee's trio of stars -- Giannis Antetokounmpo, Khris Middleton and Jrue Holiday -- will be the focus going into this Eastern Conference semifinal series, and specifically how each team chooses to guard the other. But the other potentially decisive factor will be how Brooklyn handles Milwaukee's size advantage inside.

Celtics big man Tristan Thompson had success on the boards in the first round, but he's nothing compared to the size and strength Milwaukee will be bringing at Brooklyn with Antetokounmpo and Brook Lopez, especially with the latter focusing more on attacking the paint offensively the past several weeks.

What's at stake in this series for both sides is obvious: With the Western Conference in disarray with injuries to several top stars, and with Joel Embiid now potentially hobbled for the top-seededPhiladelphia 76ers, the winner of this series will feel it can beat anyone left in the field.

With all of the star power on both sides, this has all the makings of an all-time classic battle. Here's what we'll be watching when these two juggernauts take the court for Saturday's Game 1.

The Bucks and Nets combined to score 238.7 points per game during the regular season. That's tied for the most between teams to meet in a playoff series over the past 50 years, joining the1984 first-round matchup between the Denver Nuggets and Utah Jazz.

Expect this matchup to be a similarly high-scoring series. All three Bucks-Nets games this season featured over/unders in the 240s. The highest postseason over/under in the past 30 seasons is 237 by the LA Clippers and Dallas Mavericks last year. What's more impressive: The Nets' Big Three didn't play together in a single game against Milwaukee this season.

One of the biggest storylines of this series is how can the Nets slow down two-time MVP Giannis Antetokounmpo. During the regular season, he averaged 39.7 points, 10.7 rebounds and 5.0 assists in three games vs. Brooklyn.

According to Elias Sports Bureau research, his 39.7 PPG vs. the Nets is the second most by a player against an opponent in which he later faced in the playoffs since the NBA-ABA merger (minimum of three regular-season games). Kobe Bryant averaged 42.5 points in 2005-06 vs. the Suns.


But the Nets did hold Giannis to a field goal percentage of "just" 49%. How? Give him as much space as possible on 3-pointers and take their chances.

According to Second Spectrum data, Giannis had an average separation of 10.0 feet between himself and the closest defender on 3-pointers in games against the Nets this season. That is the largest average separation for any player against a specific team in a season since player tracking began in 2013-14 (minimum of 20 3-pointers attempted).

If their regular-season meetings are any indication, the primary defender on Antetokounmpo will likely be either Blake Griffin or DeAndre Jordan.

Jordan hasn't played a minute so far this postseason, but both he and Griffin have plenty of experience defending Antetokounmpo this season. Including Griffin's time with the Detroit Pistons before joining Brooklyn, the two rank first and second in total defensive half-court matchups vs. Giannis this season.

Speaking of Durant, he along with teammates Irving and Harden have clearly shown the firepower they possess when all three are clicking. In Game 4 vs. the Celtics, they combined to score 104 points, tied for the most by a trio in a playoff game in NBA history.

For the entire first-round series, the Nets' Big Three combined to average 85.2 points, the most by any trio in any playoff series in league history.

When it comes to these three players, expect a lot of isolation. The Nets are averaging 37.0 isolations this postseason, by far the most of any team. Of the 185 total isolations they have run in the playoffs, 169 have been run by Harden, Durant and Irving.

They run all these isos for good reason, too. According to Second Spectrum data, 39 players have run 250 isolations this season (including playoffs). Harden, Durant and Irving all rank in the top four in terms of efficiency among this group. Holiday ranks fifth, Middleton is ninth and Giannis is 17th.

Milwaukee has a Big Three, too

Don't ignore the Bucks' trio of Giannis, Holiday and Middleton.


This season, Holiday is one of three players to match up on defense at least 1,000 times vs. 2021 All-Stars, including the playoffs, a list that also includes the Memphis Grizzlies' Dillon Brooks and the Utah Jazz's Royce O'Neale.

Holiday was a key playmaker in the Bucks' sweep of the Heat, creating 64 assist opportunities with Milwaukee shooting 61% off those passes.

Middleton averaged nearly 25 points on 51% shooting against Brooklyn this season. And Middleton is one of five players to average at least 20 points, 5 assists, 5 rebounds and 40% shooting on 3-pointers this season, joining the Golden State Warriors' Stephen Curry, the New York Knicks' Julius Randle, the Clippers' Paul George and the Nets' Durant.

While both teams have tremendous offenses, they're quite different on the other end. During the regular season, the Nets ranked 22nd in defensive efficiency, while the Bucks ranked ninth.

The Bucks' defense has gone through some changes since last season, but one constant has been paint protection. According to Second Spectrum data, Milwaukee leads the NBA in paint field goal percentage allowed and ranks among the top five in contest rate in the paint.

However, Milwaukee has altered its on-ball defense. According to Second Spectrum data, the Bucks switched on just 4.2 pick plays per game last season. This season, that figure has jumped to 13.9 for the entire year and 18.4 since the All-Star break and including the playoffs.

As for the Nets, they have switched on nearly 40% of on-ball screens this season, the highest rate in the NBA, including the playoffs.

Brooklyn's defense has enjoyed success in transition. According to Second Spectrum, the Nets rank sixth in points per possession allowed in transition, including the playoffs. 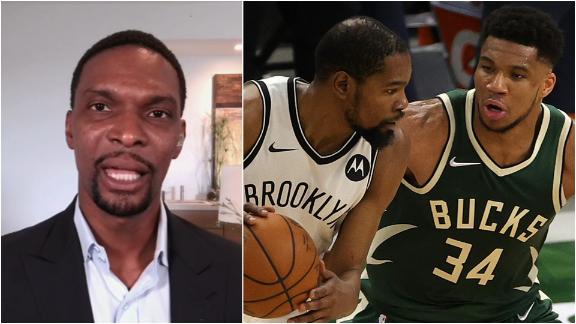 What Bosh expects from Bucks-Nets series
Chris Bosh joins The Jump and breaks down the next round between the Bucks and Nets. 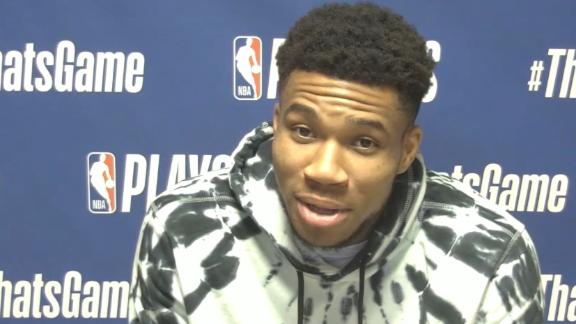