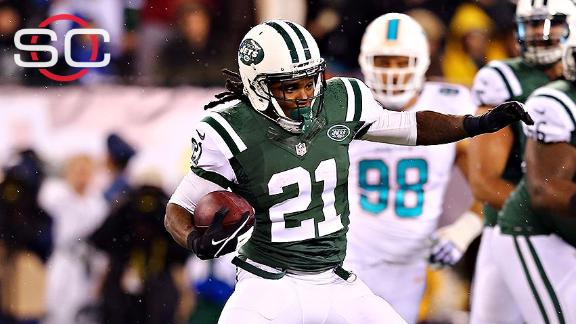 GLENDALE, Ariz. -- There's one last step in Chris Johnson's recovery from a gunshot wound suffered in March: getting back on a football field.

He'll take his first step toward that Tuesday afternoon when he participates in his first practice with the Arizona Cardinals, a day after passing a physical and signing a one-year contract. Five months of rehabbing and working out were evident when Johnson met with the team Monday.

"In his physical," coach Bruce Arians said, "there was nothing other than a bullet in his trap."

Arians said the shooting wasn't a concern for the team.

In his introductory press conference with the Cardinals on Tuesday, Johnson said the incident, in which one person was killed in an early-morning drive-by shooting, changed his perspective on his life. He rebounded from the shooting physically.

"Sometimes you just got to live life and not worry about those things so much," Johnson said. "Getting a chance to play in the NFL makes it better."

To recover from the shooting mentally, Johnson said he prayed "a lot." He said he went to church in Orlando, Florida, as he grew up.

Johnson spent the first six weeks after the shooting on bed rest and lost about 25 pounds. In April, he went to California to work out with Jay Glazer, who trains several NFL players in mixed martial arts during the offseason. Johnson said he was in a sling for the first two weeks on the West Coast and wasn't cleared to do any upper body work.

"Then once I got cleared, I started doing upper body to get my strength back and all that," Johnson said. "It turned out to be great in the end. I worked out every single day and it just helped me."

Johnson said the shooting and the subsequent wound -- he posted a photo of it on Instagram on Friday -- haven't affected his running.

Arians said he didn't know how the shooting affected Johnson, who turns 30 next month.

"You'll have to talk to him," Arians said. "I have no clue. I can't say I've been in any shootings. But that's a product of where you come from sometimes. It's a normal thing."

Johnson refused other suitors to sign with the Cardinals partly because of their recent success and partly because they have a quarterback and receivers who can spread the field for him.

Arians said a starting job wasn't promised to Johnson, who had six straight seasons with at least 1,000 yards before last year. But Johnson said he isn't out to prove anything to anybody this season.

He said he's out to prove something to himself.

"[After] the situation I went through, I'm just happy to be back playing football on Sundays," Johnson said. "I'm just going to put my best foot forward."