New York Islanders' arena saga takes another turn with Belmont bid -- but is it the right fit? 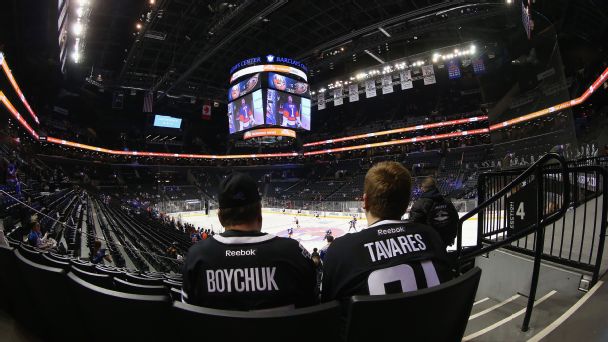 NEW YORK -- Just two years after they unfurled their four Stanley Cup championship banners from the 1980s at Barclays Center in Brooklyn, the New York Islanders are seeking to move to yet another spot on Long Island, a little closer to the arena at which they became a suburban sports dynasty.
But it might not be the best solution.

On Thursday, the New York Arena Partners LLC, which includes the Islanders and owners of the New York Mets, announced it had "submitted a comprehensive proposal to create a world-class sports and entertainment destination at Belmont Park, which we look forward to discussing with the Empire State Development Corporation."

Belmont Park, the racetrack that plays host to the Belmont Stakes, is in the borough of Queens, 13 miles to the west down the very same street, the Hempstead Turnpike, on which sits the Islanders' original and beloved arena, the Nassau Coliseum. Belmont Park is in the Elmont neighborhood of eastern Queens, near the Nassau County border -- half as far from Nassau Coliseum as it is from Barclays Center.

The Coliseum opened in 1972, and after several efforts to renovate or replace the arena fell through, the team moved to Barclays Center, home of the NBA'sBrooklyn Nets. But Barclays was built for basketball, not hockey, so some seats don't give optimum views of the ice, and it is a long train ride from the Islanders' fan base. The Brooklyn fan base also has not grown as anticipated.

The Islanders averaged 13,626 in their first season in Brooklyn and 13,101 in their second, 28th in the league and 83 percent of capacity. In their final season at Nassau Coliseum, the Islanders were 25th in league attendance, averaging 15,334, or nearly 95 percent of capacity. They have won at home, but the team has dealt with bad ice and an arena with far less intimacy than the Coliseum. The Islanders have been trying to renegotiate their 25-year lease with Barclays.

Belmont Park is accessible by mass transit, but it would be much less ideal than Barclays Center, which is steps from the Atlantic Avenue station with service to nine New York City subway lines. Brooklyn was seen to be an untapped market for hockey fans. Eric Bennett, who was at the first Islanders game in 1972 and grew up watching the team, said he was excited when the Islanders came to Brooklyn because he lived a half-mile from Barclays.

"That said, it always felt weird seeing them in Brooklyn," Bennett said. "It just didn't feel like home, even if it was close to my home. I've had nothing but good experiences at Barclays, but then again, I'm not taking the LIRR for 90 minutes to get there.

"It would be nice if they had their own home in Belmont -- kind of splitting the difference between Brooklyn and Long Island," he said. "As long as they wear the blue and orange and have a place to play in the area, I'm happy. It would be nice for them to play a few games at the Coliseum every year, though."

But would another arena, though closer to the Nassau County line, be better? The Empire State Development Commission won't share details of the bids that were made. The Islanders are said to be one of at least three interested parties, so they might not win the bid for the land at Belmont Park. And, of course, if they do win the bid, an arena won't pop up overnight.

Nassau Coliseum has been renovated, its seating capacity reduced to 13,000. The arena played host to a sold-out preseason game between the Islanders and the Philadelphia Flyers on Sept. 24. But NHL commissioner Gary Bettman said it is too small.

"I'll always pine for Nassau Coliseum," said Nick Hirshon, a longtime Islanders' fan who is an assistant professor at William Paterson University in New Jersey and wrote a 2010 book about the Coliseum. "I don't think the history and the electricity of that building can ever be replaced, not in Brooklyn and not in Belmont. But I'll be content with any plan to bring the Islanders back to their roots on Long Island."

Hirshon said Long Island is part of the team's scrappy identity, adding, "For decades, they used to be the suburban underdogs, battling against the urban Rangers, and that dynamic was lost when they moved to Brooklyn. They've always deserved their own venue, where they can derive revenue from not only their games, but also concerts and other events, and this proposal seems to give them a path to long-term success in the modern sports landscape."

But is Hempstead Turnpike on that path? Mark Weinstein, a book editor who has been an Islanders fan for 35 years, said he'd much rather see the Islanders stay in New York than see the team move to an outpost like Quebec City or Kansas City.

"But as a Manhattan resident, I am more inclined to support relocation to an arena that is accessible by subway," he wrote in an email. "Barclays is ill-fitted for hockey and way too expensive in general, but at least I can get there without a car or having to take the Long Island Railroad.

"That's why I found earlier reports of a proposed new arena out by Citi Field in Willets Point so intriguing," Weinstein added, referring to the Mets' ballpark, 10 miles northwest of Belmont Park. "Belmont is kind of in a no-man's land. Not ideal. If the Islanders are serious about challenging the Rangers for the attention and support of Manhattan residents, Barclays and Willets Point are both more attractive options."

For the Islanders themselves, Barclays Center might as well be on the road. Most of the coaches and players still live on Long Island, near the team's new practice facility in East Meadow, New York. Northwell Health Ice Center is 1 mile from Nassau Coliseum -- but 28 miles and 45 minutes (on a very good commuting day) from Barclays Center. The Islanders held optional morning skates in Brooklyn for a half-season only to move them to Long Island.

Glenn Giangrande, a native of Queens, is now a senior writer for the YES Network. He is, at least in contrast to other Islanders' fans, a pup -- a fan since only 1992. He considers the best investment he has made a Pierre Turgeon Islanders' sweater he bought on eBay for $30.

He does not have Islanders season tickets, but he tries to get to Barclays when he can. Other than the lousy ice, he thinks the arena has gotten a bad rap from "Islanders Country" -- the old guard at Nassau Coliseum -- but Barclays is more comfortable, with more snack bars and bathrooms. Mass transit is a plus. Arena workers, he said, are polite.

"I am all for anything reasonable that keeps the Isles local and ends their arena saga," Giangrande said. "However, I'm skeptical that the Belmont idea will come to pass. Can this area support another arena? Will the building be able to fill enough non-hockey dates to be profitable? I certainly hope so, because I think this is the last resort.

"The writing is on the wall with Barclays Center. Gary Bettman has said the renovated Nassau Coliseum is not a viable option. I think if a deal with Mets ownership at Willets Point was doable, which fans like to dream about, it would've happened by now. I think it's very realistic to see the current ownership selling, leading to the franchise relocating, if Belmont falls through."