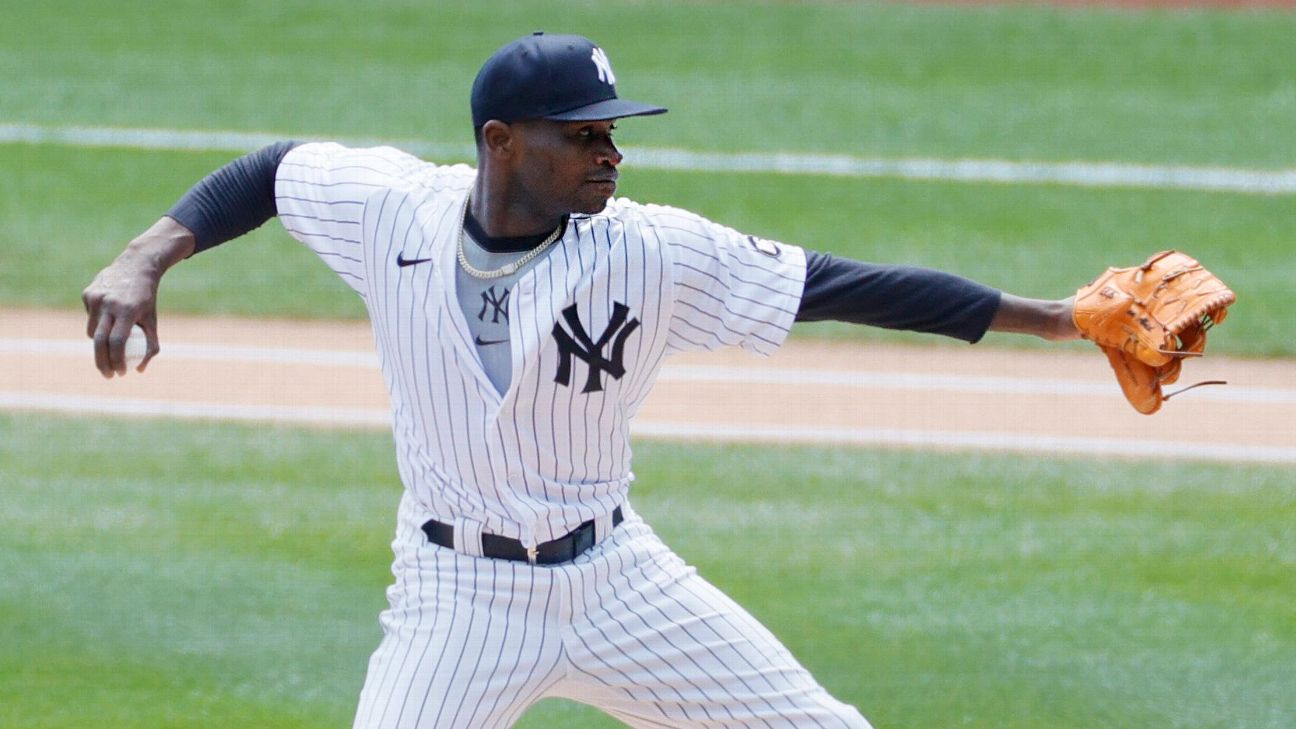 NEW YORK -- Domingo German was cheered by Yankees fans in his return from a domestic violence suspension but struggled against the Toronto Blue Jays, allowing three runs over three innings in New York's 3-1 loss Sunday.

German, 28, hadn't pitched since Sept. 18, 2019, because of an 81-game ban under Major League Baseball's domestic violence policy. He was placed on administrative leave on Sept. 19, 2019, while MLB investigated alleged domestic violence involving his girlfriend, with whom he has at least one child.


German was applauded by fans in right field after he bolted out of the dugout for warmups about 35 minutes before first pitch -- he pointed and acknowledged them as he sprinted by. He got more cheers from the virus-restricted, sellout crowd of 10,066 after completing a 12-pitch first inning.

"It was very exciting to be back on a major league mound and compete," German said via translator. "I wanted to stay calm and take it all in. Definitely had some issues in the game today, but overall, exciting."

The right-hander allowed a solo homer to Vladimir Guerrero Jr. and a two-run shot to Randal Grichuk in the second, repeatedly leaving the ball up in the strike zone on an afternoon with a 59-degree temperature at gametime. He needed 34 pitches to get out of the inning.

He labored through 22 more pitches in the third but escaped without further damage and was replaced by Michael King to start the fourth.

German was charged with four hits, a walk and a wild pitch while striking out two.

"Just a couple mistakes, they made him pay," manager Aaron Boone said. "Just not overall as sharp with some of his secondaries."


German returned to the team this spring training after being away for all of the 2020 season. He attended mandatory counseling while suspended and said he benefited.

He publicly apologized for the incident early in camp but refused to discuss the events that led to his ban. Germán also addressed teammates in group and individual settings.

The Yankees welcomed his return -- but with some wariness.

"We have his back," slugger Luke Voit said in February. "But he's skating on thin ice."

German was a breakout contributor before his ban in 2019, going 18-4 with a 4.03 ERA. On the field, he picked up where he left off this spring, locking up the No. 3 spot in New York's rotation by allowing two runs in 13 innings. He struck out 17 and walked one in four spring training starts, but he lacked that sharp command Sunday.


Yankees manager Aaron Boone wasn't sure how New York fans would greet German and said the team hadn't discussed it with him. Either way, he expected German to take it in stride.

"Obviously with what he's been through, there's going to be probably some polarizing reactions at times, and you've got to deal with that," Boone said. "And he will."

King, 25, followed German with six scoreless innings of one-hit ball. King retired his final 15 batters, baffling Toronto with a five-pitch mix. He walked one and struck out three on 68 pitches. He is the first Yankees reliever with at least six innings and no or one hit since Bob Shirley on Sept. 21, 1986.

"He's put himself in a good spot to be a real contributor," Boone said.