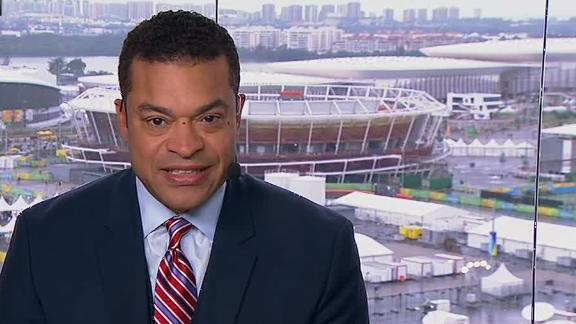 Brazil finally earned the Olympic gold medal the host nation most desperately wanted as the men's soccer team beat Germany 5-4 in a penalty shootout after a 1-1 game on Saturday.

Neymar -- far and away Brazil's biggest sports star -- scored the winning penalty after Weverton saved Nils Petersen's attempt in the fifth round of penalties to bring home the gold.

The Olympic tournament was the only major soccer tournament that Brazil had failed to win, and they finally accomplished it in front of an apoplectic Maracana Stadium in Rio de Janeiro.

Neymar also had scored Brazil's goal in the first half from a spectacular free kick as the Brazilians earned a measure of revenge for the 7-1 thrashing that Germany gave them en route to winning the 2014 World Cup.

"This restores our self-esteem," Brazil coach Rogerio Micale said. "We see that not all was lost, our football is still alive. There are some things that need to be fixed, but today we were able to make our people happy."

Germany started confidently, and in the 11th minute Julian Brandt bent a long shot from outside the box that struck the crossbar.

But Neymar took the pressure off of the nervous Maracana crowd when he delivered a perfectly placed free kick past Germany keeper Timo Horn to open the scoring in the 27th minute.

Germany hit the woodwork twice more before the end of the first half, but Brazil was able to take the slim lead into the dressing room.

But Germany came out looking to attack after the break and silenced the crowd with a goal in the 59th minute as Jeremy Toljan's cross from the wing was turned in by Max Meyer in the center of the box.

Brazil immediately went on the attack again as Renato Augusto, who missed two chances in front of goal in the first half, fired wide once again.

Germany midfielder Lars Bender then had to leave the game with an apparent injury and was replaced byGrischa Promel.

In the 77th minute, Neymar played Felipe Anderson in on goal with a through pass but the substitute was caught from behind by Germany defenders.

And moments later, Neymar came close to restoring Brazil's lead himself when his long shot flashed inches wide of the far post.

Neymar again played in Anderson in the second period of extra time, butHorn made the save.

In the shootout, the first eight penalty takers were on target --Matthias Ginter, Serge Gnabry, Brandt and Niklas Sule for Germany; Augusto, Marquinhos, Rafinha and Luan for Brazil.

ButWeverton seemed to be getting closer to stopping a Germany shot and got down to save fromPetersen in the fifth round.

Neymar then took a halted run-up and blasted the ball into the back of the net before falling to his knees in joyous tears.

"I don't have words to say anything," Neymar said later, sobbing. "I can't describe my feelings right now. I just want to thank my teammates, my friends and my family, who have been by my side during the most difficult moments.

Germany settled for the silver medal and was denied gold in the first Olympics for which it qualified since the country's reunification in 1990. East Germany won the 1976 tournament in Montreal.