NHL experts predict: The Sedin twins' 2018-19 team, which goalie will catch fire in the playoffs 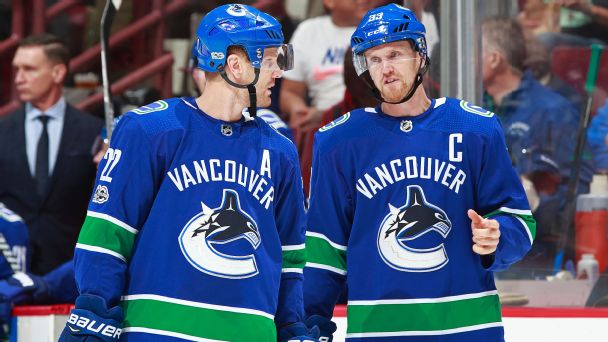 Our NHL Insiders weigh in on the NHL's most pressing topics, including this season's biggest surprises, the goalie who will catch fire in the playoffs, the Sedin twins' 2018-19 destination and which New York-area team will be most attractive to free agents this summer.

What has been the biggest surprise of the 2017-18 season?

Greg Wyshynski, senior writer: The Edmonton Oilers were co-favorites (at 8-1) with the Pittsburgh Penguins before the season to win the Stanley Cup. So don't let all this "Connor McDavidFor MVP" politicking obscure the fact that the Oilers are a god-awful mess, creating uncertainty about the stability of the defense to the construction of the roster to job security for their coach and GM. So, with that, an apology: I ridiculed Oilers fans for overcelebrating last season when Edmonton made the playoffs, because I felt it was inevitable they would reach the postseason after drafting McDavid. Now I see the error of my ways: This franchise has been handed several filet mignons over the past few years, and each one was grilled into a season of Hamburger Helper. Does anyone trust the Oilers to rebound?

Emily Kaplan, national NHL reporter: The Vegas Golden Knights aside, how about two teams that are hitting their stride ahead of schedule: the New Jersey Devils and Winnipeg Jets. We knew the Devils would have a young roster with a ton of upside. Who expected them to be competing for a playoff spot in late March? And sure, the Jets might have been a trendy breakout pick, but to display this much firepower and assert themselves as one of the best two teams in the Central Division (and really, one of the best two teams in the Western Conference) is quite impressive.

Chris Peters, NHL prospects writer: Obviously it's the Golden Knights, but more specifically it's William Karlsson. I've always liked the way that Karlsson plays, but I did not anticipate that he would become a 40-goal scorer, even in an expanded role. He had 18 total goals during his first 183 NHL games. I don't know that Karlsson will become a 40-goal scorer for the long term, or maintain the absurd 23.1 shooting percentage he has this season, but before this year, he looked like he'd never hit that mark in today's NHL.

Which goalie will get hot in the playoffs (a la Cam Wardin 2006)?

Wyshynski: OK, so Matt Murray has done little to inspire confidence for the Penguins since returning from injury. But when in doubt, go with the goalie who has two Stanley Cup rings and a .935 even-strength save percentage in 32 playoff games. Murray is also a rather robust 22-9 in the postseason, with four shutouts. The 23-year-old has proven he has ice water coursing through his circulatory system. He has also proven that he can handle the Penguins' first two potential playoff opponents -- theColumbus Blue Jackets and Washington Capitals-- quite handily.

Kaplan: The Blue Jackets' Sergei Bobrovsky. Even when he doesn't have his best season (his 2017-18 stats through Tuesday: 35-22-5, a .921 save percentage, 2.38 GAA) he's still damn good. As Greg noted earlier this week, Bobrovsky has given up more than two goals in just four of his past 17 starts. I'd argue that he is still the most talented goalie in the league. For example, had Russia fielded an Olympic team with NHL players last month, Bobrovsky probably would have gotten the starting nod overAndrei Vasilevskiy,who at the time was the leading Vezina candidate.

Peters: This is entirely dependent on his ability to stay healthy, but I'd keep a close eye on Anaheim Ducks goalie John Gibson. Despite his .916 save percentage in 22 playoff starts, I think the 24-year-old is poised for a postseason breakout. He has been one of the hottest goalies in the NHL since the calendar turned to 2018. Gibson is 17-6-3 in his past 27 starts. Only Vezina front-runner Pekka Rinne has been better over that same span. So Gibson is coming in hot -- and he's well positioned to stay hot.

Where will the Sedin twins play next season?

Wyshynski: BothDaniel Sedin and Henrik Sedinwill remain in Vancouver. It's where they want to play and where they want to retire. When I asked the twins about the future, they gave no indication that leaving the only NHL franchise they have played for was an option. Expect one-year deals for both and a return to the same low-ice-time roles they had this season. They're valuable role models and mentors for Vancouver's next wave of young standouts.

Kaplan: I can't imagine the Sedins playing without each other, and I can't quite imagine them not in Canucks uniforms, either. Leading up to the trade deadline, Vancouver GM Jim Benning made it clear he's open to Daniel and Henrik returning, though he's certainly not begging them to stay. I could see the Sedins signing team-friendly deals for one last hurrah in Vancouver.

Peters: I think it's a Vancouver or retirement for them at this point. They could do a lot of good for the franchise in a farewell tour as the Canucks try to regain their footing. Also, as much as they've fallen off their career norms, they're still producing at least at a second-line rate. They're not weighing down a team that needs to get younger, not yet at least. The Sedins have been standout players and deserve to be given all the time they need to make a final decision. Ultimately, I expect them to be back at least for one more year.

Which New York-area team is the best free-agent destination this summer?

Wyshynski: By process of elimination, the Devils. Even if theNew York Islandersre-sign John Tavares to play withMathew Barzalfor the next eight years, the systemic problems on that roster and in that organization -- what, you think the arena drama is over now? -- would scare me off. TheNew York Rangersare a couple of years away, if we're to believe they're doing the rebuild "right" and not going to end up throwing money at the problems. So that leaves the Devils, whose talent, system and potential are all tantalizing, especially, say, for a puck-moving defenseman.

Kaplan: The Devils are the logical pick considering how young and exciting their core is. The Rangers have committed to a rebuild, but I wouldn't count them out of contending as soon as 2020-21. If I were a defenseman or goalie, however, I would seriously consider the Islanders (as long as more of my defensemen and goalie friends agree to sign, too). If the Islanders shore up those two areas, this team is ready to contend -- and do so for some time. That is, assuming they keep Tavares around.

Peters: I think this kind of depends on the free agent. If it's a big-ticket UFA, he might have interest in playing alongside Tavares and Barzal with the Islanders, and maybe the same could be said for Taylor Hall and Nico Hischier in New Jersey. However, if you're a midrange free agent looking for a bigger role, the Rangers probably offer the best chance. Maybe Rick Nash ends up right back there, for all we know. The thing about going to a rebuilding team is that there's opportunity to play a bigger role, a chance to potentially be a leader on a young team, and it's still the New York Rangers and Madison Square Garden regardless of where they are in the standings. I think that still appeals to a lot of free agents out there. Additionally, I don't think this is going to be a yearslong rebuild. There's opportunity to grow with the team, as opposed to trying to find one's footing in something better established.

How would you change the NCAA-to-NHL rules?

Peters: I don't have much of a problem with them as they are, and they would be difficult to change, given the many different development routes players take to the NHL. Several college coaches don't like the rule that allows players to become free agents four years after they're drafted. They feel it puts so much more pressure on teams to sign their prospects early, thus leading to more and more players leaving college two and sometimes three years before graduation. It has become so much more common for players to take the UFA route, like Jimmy Vesey andWill Butcherdid, which bothers NHL teams, too. The NHLPA would never (and should never) allow NHL teams to hold draft rights in perpetuity. That could immobilize a player. Sure, people also get annoyed by a player's ability to burn a year off of his entry-level contract by playing in just one NHL game. Getting rid of those rules takes away leverage from players who already have so little under the entry-level system. That's a big reason why what exists now works fine.

Wyshynski: Chris spelled out the college free-agent issue, where NCAA players can untether themselves from the teams that drafted them by waiting four years to become unrestricted free agents. Like Chris, I don't necessarily want to see college players restricted from moving on by having a team hold their rights indefinitely. However, these players are assets to teams that spent draft picks on them. The notion that a young player can just walk freely, with no compensation to the team he's walking away from, runs counter to the draconian restricted free-agency rules that the NHL places on young talent. I'd like to see the CBA amended and some level of compensation, like a low draft pick, sent to teams that spend years investing their time in working with, and courting, an NCAA prospect.

Kaplan: I don't think there is a huge issue with the NCAA-to-NHL rules -- in fact, I would advocate for hockey's draft process as a model for basketball. But I would also argue that the draft age should be moved up to 19. This would force players to stay in school a bit longer. The current system pressures NHL teams to sign their prospects before their draft rights expire in four years. This could alleviate that burden, inviting players to stay in school to get the development and education that might benefit them in the long run.
Report a correction or typo
Related topics:
sportsespnnew york rangersmatt murrayandrei vasilevskiysergei bobrovskynew jersey devilsfree agentsrfastanley cuppostsasonufavancouver canucksnhlpittsburgh penguinsdaniel sedinhenrik sedinplayoffs
Copyright © 2022 ESPN Internet Ventures. All rights reserved.
TOP STORIES
Man fatally shot while riding Q train into Manhattan
3 people killed in crash near catering hall on Long Island
Body of teen who disappeared while swimming in NJ reservoir found
Something strange is happening with our universe: NASA
NYPD searching for man behind Harlem stabbing
AccuWeather: Cooler start to the week
Buffalo mass shooting victims laid to rest one week after tragedy
Show More
Israeli flags fill Upper East Side for 'Celebrate Israel' Parade
78,000 pounds of infant formula arrives in US
NJ police impose curfew after large party gets out of hand
Suspect breaks into NYC apartment, stabs man to death
Empire State Building lit to honor Notorious B.I.G.'s 50th birthday
More TOP STORIES News