NHL Playoffs Today 2020: Win or leave the bubble for the Chicago Blackhawks 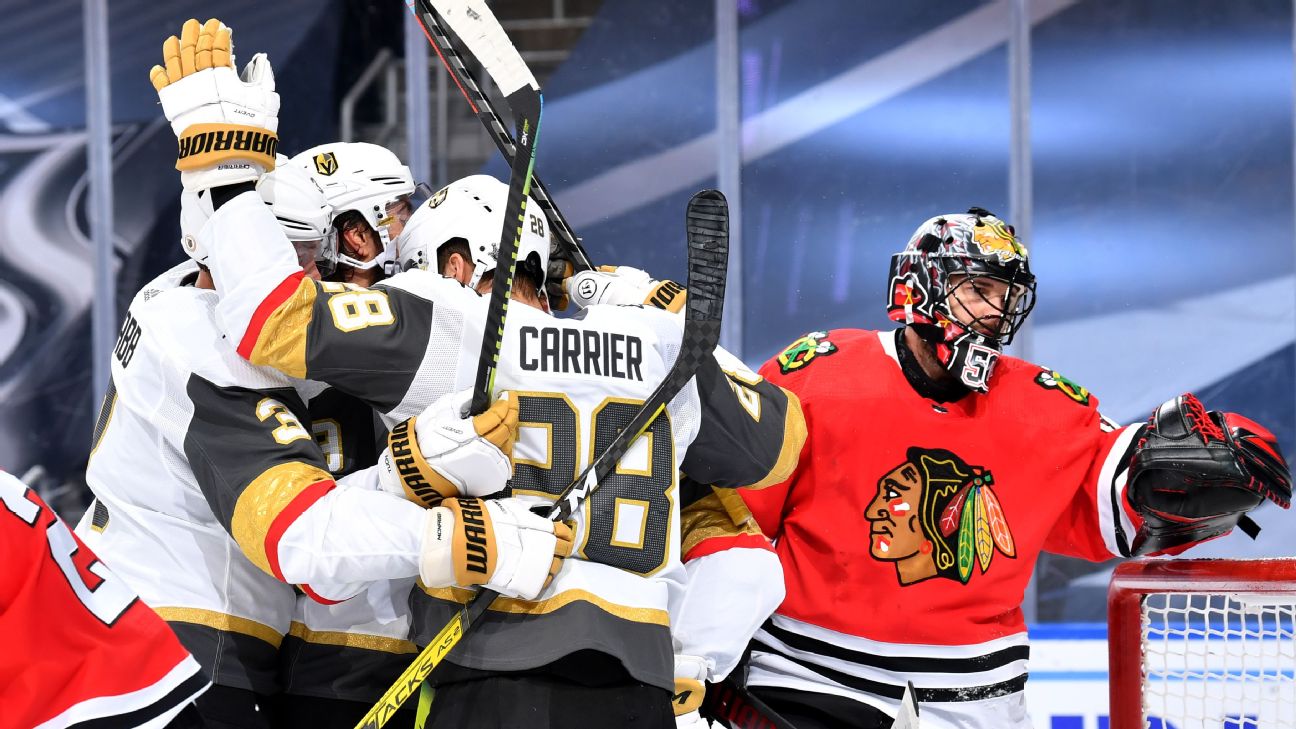 It's a big day for some recent Stanley Cup champions. The Chicago Blackhawks face elimination, while the Washington Capitals and St. Louis Blues look to avoid falling into 0-3 holes. Also, are the Vegas Golden Knights the new Stanley Cup favorites?

Check out the ESPN Stanley Cup Playoffs Daily every day of the postseason until the Cup is handed out in October.

Here's a stat we didn't expect: The Islanders are averaging 3.67 goals per game this summer, which ranks third. Combine that with New York's trademark stingy defense, and Barry Trotz has his former team playing what it's calling the most important game of the season. Nicklas Backstrom (concussion protocol) practiced Saturday, but his status for Game 3 is unclear. The Caps have been outscored 7-2 in the third period through five games. An honest assessment from Washington's Carl Hagelin: "We've only scored, what is it? Four goals so far. Sometimes that is all it takes in the playoffs if you are playing smart enough defensively, but we haven't done that, either."

Dallas needs somebody to step up offensively. Defenseman Miro Heiskanen leads the team with seven points, but no other player has more than three. The Stars will still be without defenseman Stephen Johns on Sunday, and they're reeling after a ton of missed opportunities in Game 3 -- including 19 shots that missed the net. If Dallas suffers an early exit, it's their own undoing. For the Flames, feisty winger Matthew Tkachuk is going to be a game-time decision after missing Game 4. The Flames were a bit too reliant on Cam Talbot (35-save shutout) in Game 3, but they're feeling OK. Forward Tobias Rieder summed it up: "I don't think we have to be worried -- we haven't played our best in the series."

There's a serious buzz around the Golden Knights, who have gone a perfect 6-0 in the bubble. They are looking like the best team here. The Knights are deep; not just in net, but in their ability to roll out four lines. Robin Lehner (who hasn't lost a game since being traded to Vegas) will likely get back in net on the second day of this back-to-back set. The Blackhawks are frustrated after going toe-to-toe with Vegas in shot attempts without results. Here's what captain Jonathan Toews said Saturday night: "We've got a game tomorrow to stay alive. That's the reality. ... Just couldn't find the back of the net. Tomorrow, just got to believe that we will."

The Flyers were gaining steam as a Stanley Cup favorite but laid an egg in Game 2. How should they respond? "Do you make some minor changes? Do you make some major changes?" coach Alain Vigneault teased on Saturday. "Do you show faith in the group that brought you to the dance? You'll find out tomorrow." The intrigue! On Saturday, Canadiens interim coach Kirk Muller defended his decision to use his No. 1 power play late in a blowout. "My job is to make this team as good as it can be right now," Muller said. "I had to keep getting some of these guys [opportunities] that haven't been productive; they're starting to feel it. I got to focus on our guys in that situation."

Blues coach Craig Berube won't commit to a goaltender for this pivotal Game 3, and it's definitely a possibility that Jordan Binnington gets benched. It isn't Binnington's fault that the Blues are down 2-0, though he does have a .862 save percentage and 4.27 goals-against average in four games this summer, all losses. Vancouver captain Bo Horvat now shares the tournament's lead with five goals, and he has won 60 percent of his faceoffs. Here's a strong endorsement from current teammate (and former Capital) Jay Beagle: "Bo kind of reminds me of Nicklas Backstrom in that he doesn't get attention or buzz, but he's the heart and soul of this team."

Less than two hours before puck drop, the Bruins announced a stunner: goaltender Tuukka Rask was opting out of the playoffs, and had returned to be with his family. "I don't judge anyone for that decision," Patrice Bergeron said. "We're behind him 100 percent." But now it's an opportunity for Jaroslav Halak, one of the league's best backups. Besides one costly gaffe misplaying the puck, Halak was solid turning away 29 of 30 shots in Game 3. The Canes are worried about Andrei Svechnikov, who had an awkward fall in the third while getting tangled with Zdeno Chara. It didn't look good, but we'll know more soon. Full recap.

It was Darcy, Darcy, Darcy yet again, but at least his team gave him some run support. And his teammates showed some sacrifice, blocking 27 shots. Darcy Kuemper still faced 49 shots, the fifth time he's faced 40 or more in these playoffs. And he has played only seven games. The Avs controlled this game, with 30 more shots than the Yotes had. Cale Makar and Nathan MacKinnon combined for 14 alone. "With a better night, finishing-wise, I think we're going to win that game," Avs wingerMikko Rantanen said. Full recap.

The Lightning are starting to look scary again, and maybe Joonas Korpisalo is human after all. Alex Killorn, Brayden Point and Victor Hedman all scored as Tampa Bay totally controlled the last two periods, holding a 59-13 edge in total shot attempts. John Tortorella loved the way his team played the first 11 or 12 minutes -- and then they hit a wall. The coach knew it was coming; he said he thought it might happen in the last game following the five-overtime Game 1. Remember, the Blue Jackets played in the only series to go five games in the qualification round, and that series included multiple games that went to OT as well. Full recap.

There is probably no better goaltending tandem in the NHL right now than Robin Lehner and Marc-Andre Fleury. "Flower" drew into the lineup in the first game of a back-to-back, and there wasn't any drop-off. Chicago has been getting decent effort from its forwards but without results. Alex DeBrincat had 10 shot attempts (eight on goal) on Saturday, but nothing would go in. The hockey gods did not want Patrick Kane to score on this attempt; the Blackhawks lead the tournament with 14 goal posts hit, including five from Kane. Full recap.

Had he not let in a fluky goal in the final minute, his stat line would have been even better, but the Coyotes' MVP this summer was still spectacular, stopping 49 of 51 shots.

Charlie Coyle shows up in the playoffs. He has 11 goals in 30 postseason games since joining Boston. And he knows how to play baseball, too.

Fleury got the start in the first half of a back-to-back set and made 26 saves on 27 shots -- earning his 80th career playoff win, tying Ken Dryden for sixth most in NHL history.

Billboard of the day

A big trend in the summer restart is teams buying billboards that players can see on the way to their rink. OK, it may or may not have been Gritty that started the trend. Either way, here's the latest installment, courtesy of the Lightning:

"In Tuukka's case, he has a newborn at home along with two other young girls. He just felt that he needed to be home with them at this particular time. ... Give Tuukka a hell of a lot of credit for trying to persevere through this, and initiate the process to come up and be with his teammates, because first and foremost that's what he wants to do. But the priorities are in the right order, and this is what he has to do at this time." -- Boston GM Don Sweeney, on his goaltender's decision to leave the bubble 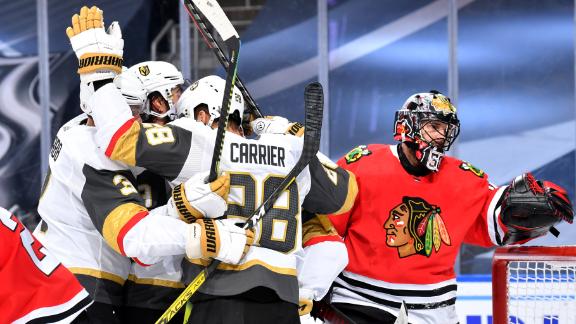 Golden Knights take commanding 3-0 series lead over Blackhawks
William Karlsson and Patrick Brown each net goals as the Golden Knights win 2-1 to go up three games to none in the series. 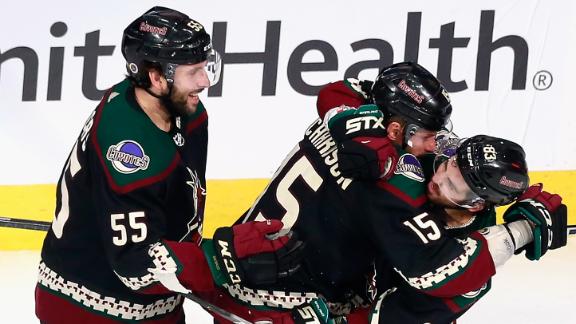 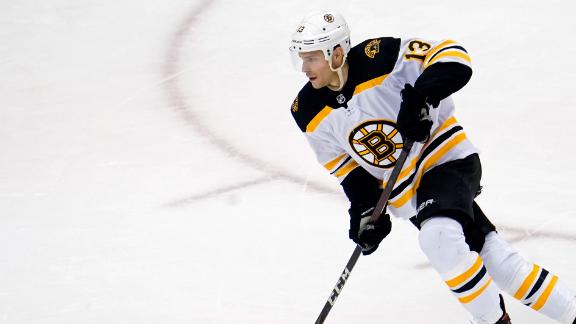 Coyle key in Bruins' Game 3 win
Charlie Coyle nets Boston's first goal of the night, scoring on a 2nd-period power play. Then in the third, he gets the assist on Sean Kuraly's goal. 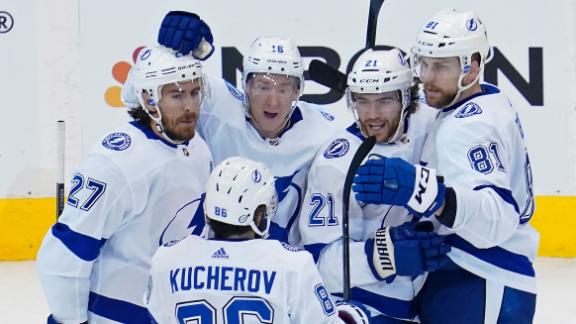