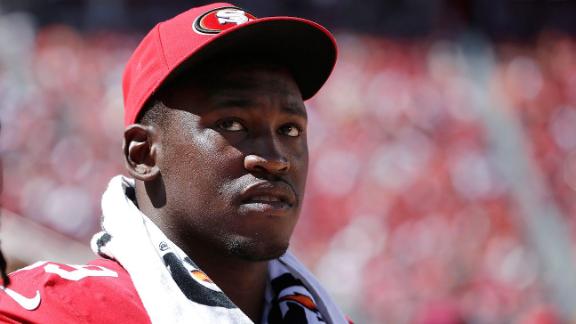 The San Francisco 49ers are looking into the possibility that linebacker Aldon Smith was drinking at Ray McDonald's home on Dec. 15 with his former teammate and a woman who alleges she was sexually assaulted the day before by McDonald, general manager Trent Baalke said in a radio interview Monday.

McDonald hasn't been charged with a crime but was released last Wednesday by the 49ers, who cited a pattern of behavior and off-field issues.

Baalke was asked if the reason the team hasn't yet acted against Smith is because he has more impact on the field for the 49ers. Smith served a nine-game suspension this season for numerous indiscretions, including a DUI in 2013. He was sentenced to three years' probation in that case and isn't allowed to drink alcohol, per terms of the agreement. Smith said before the season that he is sober.

"Absolutely not," Baalke said. "And I think anyone that knows football, and not saying that you don't, but I think anybody that has seen Ray McDonald play -- Ray's played at a very high level for a long time. So I don't look at it as, you've mentioned there, that at all.

According to court documents unsealed Monday that were written by San Jose police investigators to obtain a search warrant for McDonald's home, the woman told authorities she has no memory of the sexual encounter that occurred in McDonald's San Jose house, which police say occurred Dec. 14 a few hours after the 49ers returned from a 17-7 loss to the Seahawks in Seattle.

"He's been in the (NFL's) alcohol program and gets tested twice a week, and he's never failed a test," Hendrickson told the newspaper.

The documents stated that the incident began with the woman drinking with friends at their home. They then met McDonald and several of his friends at a nearby bar and finished the night at his San Jose home.

She told police the last thing she remembers about the evening is falling down near McDonald's pool and hurting her head. She awoke naked the next morning next to McDonald, who initially denied a sexual encounter, according to the court documents.

An investigator using the woman's phone Dec. 16 and pretending to be her texted McDonald complaining about the encounter. McDonald responded by saying the woman "started coming on to me" and that the incident was consensual.

"I don't understand why you're bothered. U chose to stay with me another day," McDonald texted. The investigator posing as the woman replied that McDonald shouldn't have had sex with her while she was unconscious.

"I didn't do anything wrong," McDonald replied. His home was searched that night by authorities.

The affidavit submitted by San Jose police to a judge in application for a search warrant said the sexual encounter occurred on Dec. 13 and that Smith had drinks with the pair Dec. 14. Sgt. Heather Randol, a police spokeswoman, said Monday that those dates were wrong. Police say the encounter occurred Dec. 14 and drinks with Smith happened the next day.

The San Jose police department's investigation is ongoing. McDonald could not be reached for comment, and his agent, Tom Condon, didn't immediately respond to text and phone messages.

Last month, the Santa Clara County district attorney's office announced that it declined to file charges against McDonald in a domestic violence investigation. He was arrested Aug. 31 while celebrating his then-upcoming 30th birthday at his home.

ESPN.com 49ers reporter Paul Gutierrez and The Associated Press contributed to this report.