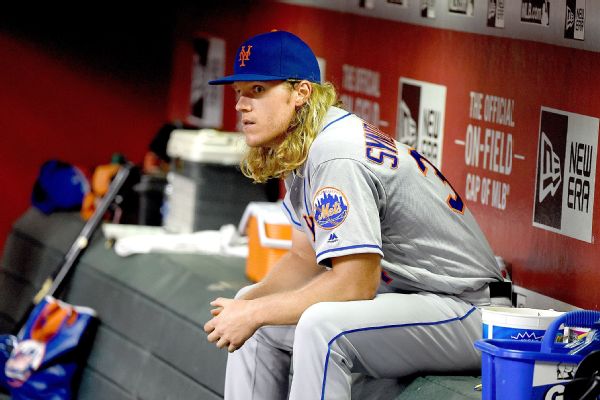 Noah Syndergaard, who hasn't pitched for the New York Mets since April 30 due to a torn right lat muscle, said Thursday he does not regret refusing to have an MRI in the days before suffering the injury.

"No, no regrets for me really," Syndergaard said in an interview with the "Boomer & Carton" show on WFAN Radio. "There was nothing structurally wrong. I was able to go out there and play catch and throw all those bullpens. I felt great, ready to (start) that Sunday. But something happened."

The right-hander was scratched from an April 27 start against the Atlanta Braves with what the Mets said was biceps and shoulder discomfort. When Syndergaard missed that game, he refused the Mets' request to have an MRI -- a decision general manager Sandy Alderson said at the time "went sideways.''

Syndergaard then pitched April 30 at Washington, lasted just 1 1/3 innings and went on the 10-day disabled list the following day. He was ultimately diagnosed with the torn lat, and he hasn't picked up a ball since.

The hard-throwing 24-year-old said he and the Mets are on the same page.

"Yeah, I feel like after all that happened, our relationship is even stronger than it was before," he said, referring to Alderson. "We kind of had our differences, but we were able to grow from that."

As for his rehab,Syndergaard told "Boomer & Carton" that his arm "feels great" but that he's being cautious with the recovery.

"As far as timetable is, it's tough to say," the pitcher told the radio show. "Lats are tricky just because it's a very specific rehab program. If you come back too soon, you really put yourself in a better situation to hurt yourself again.

"I probably won't be able to pick up a ball in quite some time. I have no pain but want to make sure my lat is nice and stretched out and flexible and ready to go."

At the time of the diagnosis, the Mets said Syndergaard had been told not to throw for about six weeks and would be sidelined through at least the All-Star break in July.

"It's painful. It definitely hurts not being able to go out there and compete and do everything you can for the best fans in baseball," Syndergaard told WFAN. "It sucks, but you live and you learn from it."

Syndergaard also was asked about his opinion on Mr. Met, the team's mascot who got into hot water when he flipped off a fan at Citi Field on June 1. Mr. Met and Syndergaard had feuded on social media in the past.

"(I was) confused (at what he did) because he only has four fingers,"Syndergaard said.