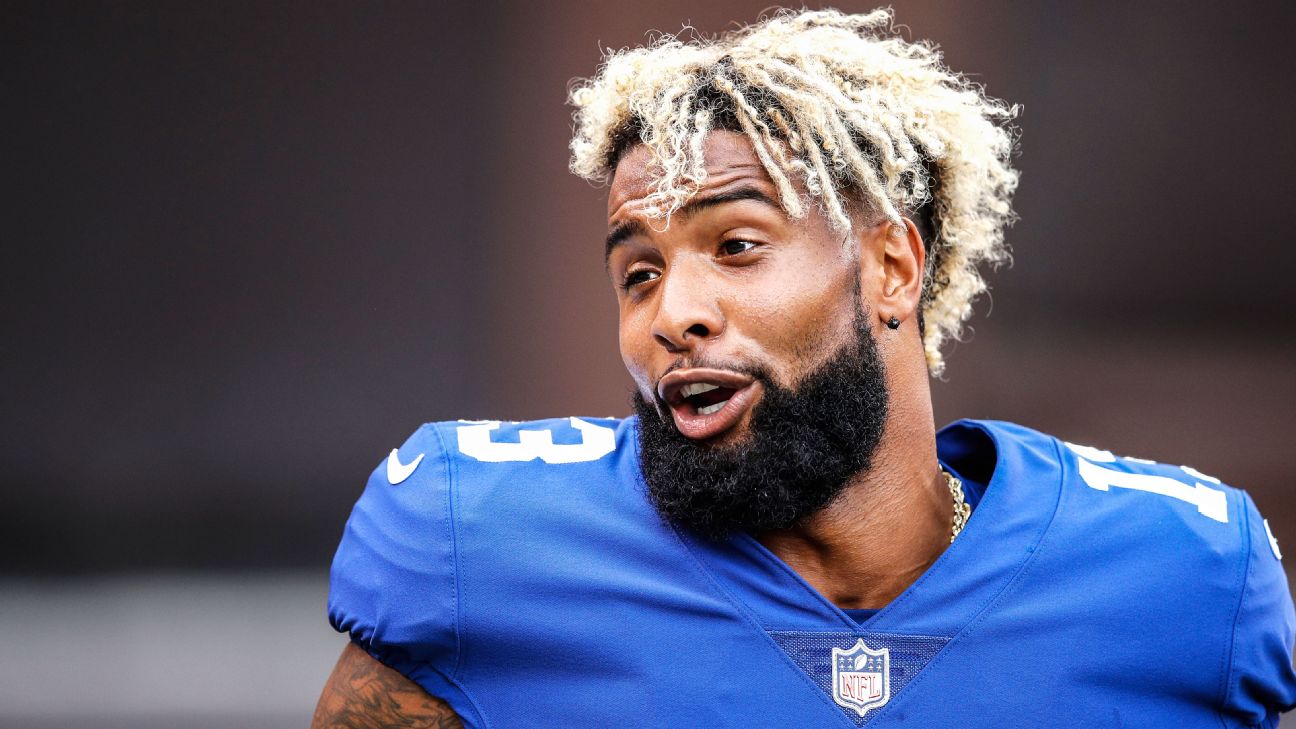 EAST RUTHERFORD, N.J. -- New York Giants' Odell Beckham Jr. is 12th in the NFL with 271 receiving yards. He still thinks he could -- and should -- do better despite those three games being his first since breaking his ankle last October.

There was one play in particular during Sunday's 27-22 win over the Houston Texans where Beckham wasn't pleased with what he saw on tape.

"There have still been times where you're coming back, and I'm used to everything, but it's like you're scared to just hit it like you used to," Beckham said on Thursday. "And I saw there was one opportunity I missed. I was upset about it. There was a slant and it cleared out for me. It was perfect, and I kind of slowed down and [I] just hesitated a little bit for a second. And that could have been the difference. That's the ones that go 60 or 70."

The play Beckham was referring to presumably came in the third quarter. It was a first-and-10 from the Giants' 9-yard line. Beckham caught a quick slant and before he ever hit high gear was clipped at his heels by cornerback Aaron Colvin. It went for a 13-yard gain instead of a 91-yard touchdown.

Beckham insists there was a hint of hesitation that cost him all those yards. It was hard to even seen with the naked eye. But he said it happened and had an idea of why.

"I just think that is part of getting back into it. Third game," Beckham said. "It's going to come and when it rains it pours."

When looking at that play, all Beckham could think of was a 2015 matchup with the Jets. In that game he ran an identical route, caught the ball in stride and took it for a 72-yard score. This he believes is the difference between then (at the top of his game) vs. now.

Maybe there is something to it. Or maybe Beckham is just being hard on himself. He is known to be a tough self-critic.

"I'm never content. That is not a word I like to use," Beckham said. "But I don't know. It's something I'm just coming back. I'm trying to feel it out. And I'll regret that moment for life. I'll watch that film and will remember that I could've taken that for 80. But it didn't happen and I'm happy with what we're doing. I'm definitely not content. I feel like I can always do more. That will always be my mentality. I can go for 500 yards and I'll still look back at that one pass you didn't get and it's like, wow, I could've went for 560 and a touchdown. ... That's just how my mind is, how I'm wired."

This is just fine with the Giants, who signed him to a five-year extension that could potentially be worth $95 million. Coach Pat Shurmur agrees with the approach and Beckham's self-assessment.

"I'm glad when players say that," Shurmur said. "When players are critical of their play and still have production, I think that is terrific. It means they are trying to get incrementally better. I agree. Let's hope they all get better."

An improved Beckham could be scary.

"Not for me," Shurmur said.

The next step is reaching the end zone. Beckham hasn't gotten there in the first three weeks of the season, when he has 24 receptions on 35 targets.

Beckham has gone four regular-season games without a touchdown just once during his professional career. That came the first four weeks of the 2016 campaign.

"I love being in the end zone. It's been a while. It's been a while just being on the field," he said. "Getting in the end zone, of course I want to get in there, but when it comes, it's going to come."
Report a correction or typo
Related topics:
sportsespnhouston texans new york jetsnflaaron colvinodell beckham jranklenew york giants
Copyright © 2022 ESPN Internet Ventures. All rights reserved.
TOP STORIES
Flight delays ease up amid chaotic 4th of July weekend travel
1 killed, several injured in shooting at mechanic shop in NYC
Ex-boyfriend arraigned in murder of Upper East Side mom
AccuWeather: Less humid
Good Samaritan tries to save man seen jumping in Hudson River
Man found at Taylor Swift properties in NY faces stalking charges
Hard Rock deal ends casino strike threat in Atlantic City
Show More
Smoky 4-alarm fire breaks out in New Jersey building
Man shot in the head while riding scooter in the Bronx
3-year-old boy dies after falling from 29th-floor balcony in Manhattan
Where to watch 2022 Fourth of July fireworks
Macy's 4th of July Fireworks 2022: Everything to know
More TOP STORIES News