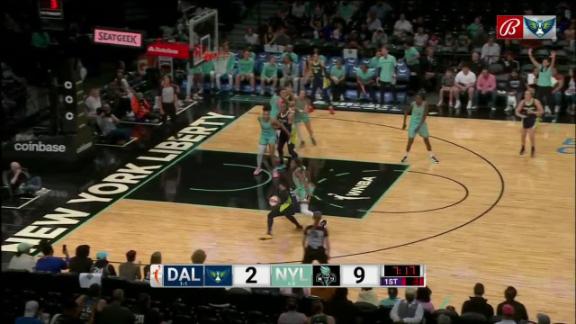 NEW YORK -- - Arike Ogunbowale scored 18 of her 21 points in the second half and the Dallas Wings beat the New York Liberty 81-71 on Sunday.

Dallas (2-1) had a two-point lead at halftime before Ogunbowale got going. She had 12 points in the third quarter, including a 3-pointer that made it 62-52 with 1:55 left in the period.


"I would just say that's the way the game came to me," Ogunbowale said. "Personally, I didn't score much in the first half, but my team held it down."

New York (1-3) got within five in the fourth quarter but could get no closer thanks to Ogunbowale and Isabelle Harrison, who finished with 18 points.

"We just took what the defense gave us," Dallas coach Vickie Johnson said. "We took a couple of quick shots but for the most part we moved the basketball and found the open person. If we get to our spots, we can find open people and we have players that can knock down shots."

Sabrina Ionescu had 17 points, seven rebounds and six assists to lead the Liberty. Natasha Howard scored 14 points after missing 14 of her 15 shot attempts in her last game.

"It was within myself. My teammates had confidence in me and that brought my confidence back," Howard said. "It was a bounce back."

New York's Han Xu saw extended minutes with Stefanie Dolson in foul trouble and scored 10 points. The 6-foot-10 center from China is a crowd favorite and finished just short of her career high of 12 points set in 2019. She missed the last two seasons because of the coronavirus pandemic and playing for China's Olympic team last summer.

"With Han, she's always ready when her number is called," Howard said. "She always puts the work in. I'm happy with what she did on the court. She helped us out big time."

New York got off to a hot start and led 9-2 behind Howard before Dallas scored 15 of the next 17 points. Gray had 10 points in the quarter and the Wings led 26-22 after one. Dallas held a 39-37 advantage at halftime.


It's always special for Wings coach Johnson when she comes back to New York. She starred for the Liberty from 1997-2005 and is in the franchise's ring of honor.

New York guard DiDi Richards was out after re-aggravating a right hamstring injury on Friday. She played four minutes in that game and coach Sandy Brondello said there's no timetable for Richards' return. ... Guard Rebecca Allen was back with the team after losing in the finals of the Spanish League. She didn't dress for the game but could play Tuesday in the team's next game against Connecticut.