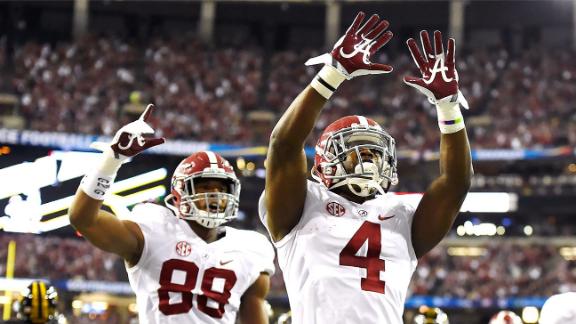 The No. 1 Crimson Tide will face the No. 4 Buckeyes in the Allstate Sugar Bowl, and the second-seeded Ducks will face the third-seeded Seminoles in the Rose Bowl presented by Northwestern Mutual, both on New Year's Day.

The 12-member selection committee bumped TCUfrom the top four in favor of the Buckeyes, who defeated Wisconsin59-0 in the Big Ten championship game on Saturday.

The Horned Frogs, ranked No. 3 in the previous rankings, dropped to No. 6, behind Florida State, Ohio State and Big 12 rival Baylor.Without Baylor and TCU in the College Football Playoff, the Big 12 loses out on $6 million for having one team in the playoff field.

Alabama and Oregon remained No. 1 and No. 2, respectively. Florida State, which defeated Georgia Techin the ACC championship game on Saturday, moved up one spot to No. 3.

The semifinal winners will meet in the College Football Playoff National Championship Presented By AT&T on Jan. 12.

The College Football Playoff replaced the Bowl Championship Series this season. The BCS matched the top two teams in the country in a national championship game.

Baylor and TCU won't get to play for a national championship, but both teams will play in "New Year's Six" bowls.

The Bears will play No. 8 Michigan Statein the Goodyear Cotton Bowl Classic, while the Horned Frogs will face No. 9 Ole Missin the Chick-fil-A Peach Bowl. No. 7 Mississippi Statewill play No. 12 Georgia Techin the Capital One Orange Bowl. No. 20 Boise Stateand No. 10 Arizonawill meet in the VIZIO Fiesta Bowl.

Las Vegas sports books installed Alabama and Oregon as the betting favorites. The Westgate SuperBook opened the Crimson Tide as 9.5-point favorites over Ohio State. It's the 68th straight game that Alabama has been the favorite. It's only the fifth time the Buckeyes have been an underdog under coach Urban Meyer. For his career, Meyer is 14-8 straight up as an underdog.

Oregon opened as an 8.5-point favorite over the Seminoles at the Westgate. It's the first time Florida State has been an underdog in its last 50 games, a streak that dates back to September 2011 againstClemson.

The playoff contenders did not make it easy on the committee chairman Jeff Long and his colleagues on the panel by all winning on Saturday.

The committee has been ranking the top 25 weekly since late October's rankings and last week had Alabama and Oregon at the top, followed by TCU and Florida State.

The committee ranks teams differently than traditional college football polls, such as the AP Top 25. Instead of collecting a ballot from each member and tallying votes, the committee ranks small groups by a series of votes. And Long, the athletic director at Arkansas, has said that each week the panel starts with a blank slate.

The great debate for weeks was whether TCU or Baylor would make it into the final four. The Bears beat their Big 12 rivals 61-58 in Waco back in October, but from the start the committee ranked TCU ahead of the Bears, who lost at West Virginiaby 14 and played a particularly weak nonconference schedule.

For weeks, Long said that the difference between the Bears and Horned Frogs was not close enough for it to come down to the head-to-head result. But when the season concluded the teams had played 10 common opponents. The Big 12 further muddled the issue by not designating a champion by a tiebreaker. The Bears and Frogs both got a trophy and are called co-champions.

"It's one of those things if you didn't want to be disappointed you need to be undefeated," TCU coach Gary Patterson said. "It's the only way you can control your own destiny and we didn't do that."

Long said TCU's drop was more about the Buckeyes than the Frogs, but it highlighted a problem with weekly rankings. Commissioners initially leaned toward not having them when they first started putting the playoff together.

The Big 12 can't hold a championship game because it only has 10 teams, but the conference, along with the Atlantic Coast Conference, is trying to change that. The leagues have proposed getting rid of NCAA rules requiring a conference have 12 teams split into two divisions to play a title game.

Ohio State has come from the farthest during the season, overcoming an early loss to Virginia Techto make a strong run.

Florida State's unbeaten record hasn't gotten the respect the Seminoles believe it deserves from the committee. The defending national champions are the only undefeated team in FBS. But numerous close calls and comebacks have led the committee to drop the Seminoles in the rankings.

Ultimately, though, the Noles will get to defend their championship in the first playoff.

The top six teams in last week's rankings all won on Saturday. On Sunday, the teams were the same, but the order was very different. And it left many fans wondering why.

Long said it was too soon to say what changes the committee would recommend to the commissioners. It's safe to say the benefit of having weekly rankings will be addressed when Long's crew reconvenes in a couple of months.

"I think that the committee will look at this year, look at this season, look how the entire process went," he said.

Until then, let the playoff games begin.

ESPN.com's Darren Rovell, David Purdum and The Associated Press contributed to this report.

Inaugural College Football Playoff Field Announced
CFP selection committee chairman Jeff Long announces Alabama, Oregon, Florida State and Ohio State as the top four teams in the nation and explains how the committee agreed on the Buckeyes as the No. 4 seed.

Saban On Alabama's Top Seeding, Facing Ohio State
Alabama coach Nick Saban talks about the Crimson Tide's No. 1 ranking after claiming the SEC title and the opportunity to face Ohio State in the Allstate Sugar Bowl.