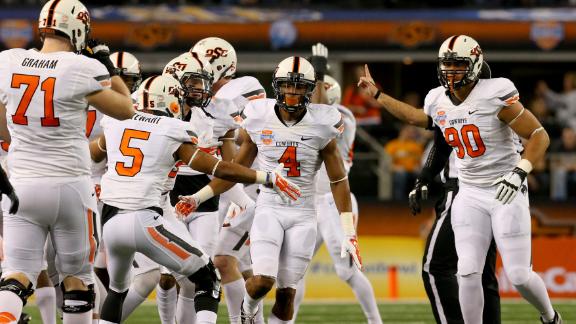 The Oklahoma State Cowboys will be practicing a little less this season because the program's Academic Progress Rate score has dropped below the NCAA's minimum standard.

The football team will lose the equivalent of one practice day per week this season for falling below the standard -- an APR score of 930 over a four-year period, or a score of 940 over a two-year span. As a result, the team can practice five days a week instead of its current six, and for a total of 18 hours instead of the 20 permitted by the NCAA.

Oklahoma State came close to avoiding the penalty altogether, scoring a 929.41 over the past four years. Had the team posted a 929.50, the score would have been rounded up to 930.

"We are taking steps to ensure that our APR numbers improve moving forward," athletic director Mike Holder said in a statement. "We are accountable for what we do and, ultimately, we are here to serve our student-athletes and do our best to keep them on track to be lifelong contributors to society."

The program avoided a postseason ban because of its recent improvement in APR, and school officials anticipate the practice ban will be limited to the upcoming season.

"We have shown significant improvement over the last two years and we were able to demonstrate that we've taken strategies to address the areas where we were losing points. That's why we received partial relief from the standard penalty," Kevin Fite, Oklahoma State's senior associate athletic director for compliance, said in a statement.

Even though Oklahoma State will have to give up a practice day, the NCAA actually reduced its original standard penalty of four practice hours to two hours because of the "significant improvement" the school showed over the past two years.

The program also expects to get an immediate boost in retention rate from its most recent senior class, which included 30 players.

Overall, NCAA student-athletes in baseball, men's and women's basketball and football continue to show improvement academically, according to the latest APR report released Wednesday, but the number of teams banned from postseason play because of shortcomings increased dramatically, as well.

Last year, 13 teams were banned from the postseason because of APR penalties. The number of teams facing APR postseason bans rose after the NCAA raised its multiyear benchmark from 900 to 930.

"Ten years ago, the membership designed the APR to encourage student-athletes to stay in school and earn good grades," NCAA president Mark Emmert said in a news release. "We are pleased to see that more and more student-athletes are doing that every year. The significant academic standards adopted by our membership help us support success in the classroom to the same degree that we support success on the playing fields."

The NCAA calculates a team's APR each academic year. Scholarship athletes who remain eligible each semester receive one point for remaining academically eligible and one point for staying in school or graduating.

Additionally, the NCAA data showed the number of student-athletes dropping out of school while ineligible continues to decline dramatically -- down more than 40 percent over the past 10 years. In fact, the NCAA said more than 13,000 former student-athletes have returned to schools to earn their degrees. Students who return to school and earn degrees allow their respective schools to "earn back" a lost retention point for students who left school without graduating.

"We are very encouraged by the 13,000 student-athletes who returned to school and graduated after originally leaving without their degrees," NCAA committee on academic performance chair Walter Harrison, president of the University of Hartford, said in a news release. "These student-athletes reached the goal of graduation, and I applaud them for their success."

Boise State, Clemson, Duke, Northwestern and Rutgers are the only FBS programs to finish in the top 10 percent in each of the past four years.