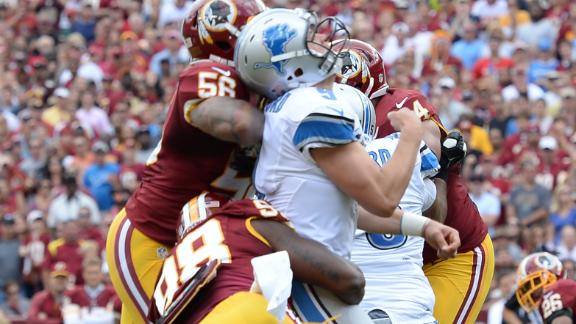 Washington Redskins linebacker Brian Orakpo wants the league to add another play to the list of those that can be reviewed: roughing the passer.

And he's not making the push just because of a penalty that was called on his team during Sunday's 17-6 loss to the Houston Texans.

The Redskins' Jarvis Jenkins was flagged for roughing the passer after officials told him he needed to go a little lower. Earlier in the game, the Texans'D.J. Swearinger received the same penalty for a hit on Robert Griffin III.

"I understand what the league is trying to do -- protect the quarterbacks, clean up the big hits," he said after the game. "But I don't know, maybe we should start reviewing those type of plays because those are real momentum-type plays. Maybe we should review them and see where the initial target is, because even the one for the Texans, I thought it wasn't even a dirty hit. The one on Jenkins I felt wasn't a dirty hit.

"I wish we had a replay for it because it seemed pretty clean to me."

Jenkins said afterward that an official told him his face mask has to be at the quarterback's shoulders or below. He said he wants to send the tape to the NFL to see what he did wrong or how he could avoid drawing a flag in the future.

"He's shorter than me so I tried to lower my target and hit him," said Jenkins, who is two inches taller than Texans quarterback Ryan Fitzpatrick.

Orakpo said that's part of the problem for pass-rushers. It's a similar complaint to the one defensive backs have when targeting receivers who lower their bodies before contact.