Overshadowed for once, Henrik Lundqvist quietly bounced back in a big way for Rangers 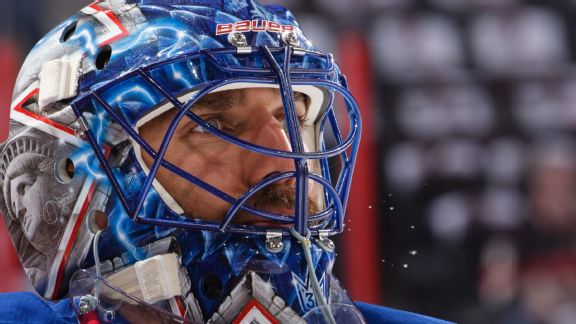 NEW YORK -- By scoring eight goals in a pair of 4-1 wins, the New York Rangers certainly had their way with the Ottawa Senatorsin Games 3 and 4 of their second-round Stanley Cup playoff series.

Overshadowed by all the goals and assists from unheralded players such asOscar Lindberg, Nick Holden and Tanner Glass? The contributions of the Rangers' typically most heralded player, goaltender Henrik Lundqvist.

That doesn't happen very often. But Lundqvist was happy to give credit to his teammates after Thursday night's victory, which tied up this Eastern Conference second-round series at two games each. Game 5 is Saturday at 3 p.m. ET in Ottawa.

"It's not a one-man show here," Lundqvist said. "It's about four lines doing everything right, and that's what you need this time of year."

Yes, Lundqvist gave up a goal in each game in New York. But in each case, not until the Rangers already held a 4-0 lead. When the pressure was really on, he stood tall.

The 35-year-old Swede wasn't able to add to his postseason shutout tally (10). But he did earn his 61st career playoff win Thursday, tying Tom Barrasso for 13th on the all-time list.

Lundqvist is the active leader among goaltenders in both playoff appearances (126) and wins (61). That kind of experience surely came in handy when he and his teammates arrived home from Ottawa trailing 2-0 in this series.

"I think it starts with believing in yourself and a system, the way we've been playing all year," Lundqvist said. "We're not going to change much now. It comes down to execution, focus."

The Rangers certainly looked focused in their two wins this series. They jumped all over the Senators in the first period of Game 3, outshooting them 15-5, and took a 2-0 lead and never looked back.

It's not easy to recover from a 2-0 series deficit, especially when you've lost Game 2 in double overtime, blowing a two-goal lead late in the third period. But this is a very experienced Rangers team. And it's not just Lundqvist -- New York's top five players in career postseason games are all on the current roster: Lundqvist, Dan Girardi (120), Marc Staal (102), Derek Stepan (95) and Ryan McDonagh (94).

In addition, the Rangers lead the NHL in playoff games played (91) since the start of the 2012 postseason.

"It was important for us not to feel sorry for ourselves, being in a tough spot," Lundqvist said. "It was about sticking to the process, and [doing] the right thing in practice."

Practice made nearly perfect, at least for the two games in New York. The Rangers have trailed for only four minutes and 11 seconds in this series, in nearly 263 minutes of game time.

"All we've really done is won another game here, won at home, which we had to do," Rangers coach Alain Vigneault said. "Making a couple plays with the puck that we need to make, and we've been able to capitalize on a few of our chances."

They've also gotten very good play from their star goaltender, who bounced back from a disastrous Game 2 in a big way, and is on the same page as his coach.