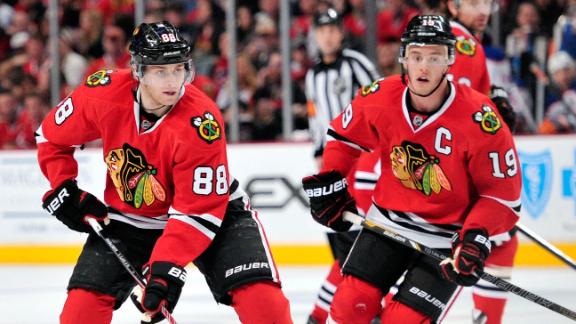 CHICAGO -- Patrick Kane and Jonathan Toews, both top-five draft picks, began their NHL careers together for the Blackhawks in 2007 and have been behind the franchise's resurgence the last seven seasons. Chicago has won two Stanley Cup titles, reached four Western Conference finals and made six consecutive playoff appearances since their arrival.

Kane said they never considered exploring what their other options could be outside the Blackhawks.

"Even you can see free agents these days, they want to come to Chicago and be a part of not only this team and organization, but the city and the fans as well, obviously the tradition that has been going on here for the past few years of winning hockey games," Kane said. "It was not even a thought to think about continuing your career anywhere else. I think we're both happy we're locked up here for a while."

Blackhawks general manager Stan Bowman said Wednesday he understands there will be salary cap challenges ahead after recently re-signing Patrick Kane and Jonathan Toews to identical eight-year, $84 million contract extensions, but it's his job to make it work.

The new contracts for Kane and Toews will go into effect during the 2015-16 season. The NHL's salary cap is at $69 million for the upcoming season, but is expected to increase in future seasons.

"I don't know if there's any more pressure," Bowman said regarding the salary cap at a news conference at the United Center on Wednesday. "I think that's our job to make it work. It's obviously a puzzle to put together, but we're going to make it work. We've been able to do that in the past. I have a lot of faith in the ability to keep that going.

"I have always said the most important thing for us is you can't get star players. Once you do get ones, it's so hard to win. You got star players here who have shown the ability to win. They want to be here. It's not even a discussion point. I'm just thrilled we have two of them. Most teams would die to have one of these players on their team. We have two of them here. We're very fortunate. The rest of the stuff will work itself out. We put a lot of work into finding young players and surrounding these guys with a great supporting cast."

Pat Brisson, who represents both Kane and Toews, said Wednesday the two players could have been worth as much as $13.8 million a year each on the open market. They are set to become the highest-paid NHL players with an annual average salary of $10.5 million each.

"They could have demanded $13.8 million each, but at the same time they understand that hockey is a team sport," Brisson said. "The reason why they're also successful as players is based on the environment they're in. I give them a lot of credit for understanding that, which role they can play currently and in the future."

Toews said he and Kane agreed on their contracts because it paid them well, but it also wouldn't destroy what the Blackhawks could do in the future with the salary cap.

"I think there is a balance there," Toews said. "I think as far as looking at the team that we have, I guess the truths that do exist as far as trying to keep a solid, successful team together with a lot of key parts that go beyond just the two of us. Like we said, we're very conscious of that and the success we've had as individuals on this team has a lot to do with the great teammates we've had along the way. We're very conscious of what goes into that as far as keeping this team together.

"On the other hand, you like to see that market keeps going up and up as the NHL keeps growing as a sport. I think at the end of the day you want to look after your family and your own interests as well, but I think we did pretty well at balancing that and we're very happy with the way things worked out. Like we said, we're excited to be a part of this family for another eight years."