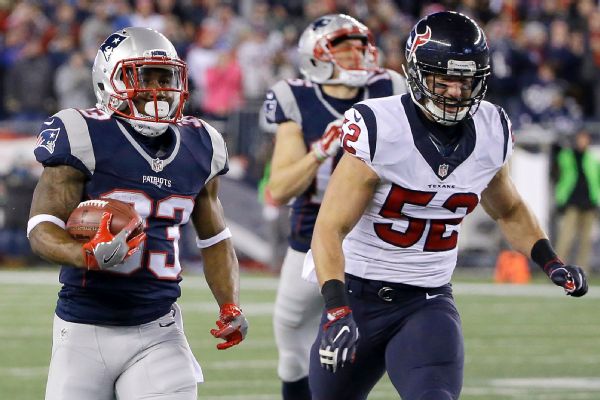 Kansas City Chiefs rookie Tyreek Hillaccomplished the feat during the regular season, but prior to that, the last player to do so in a regular-season game was Gale Sayers in 1965.

The Patriots turned to Lewis as their primary running back, starting ahead of LeGarrette Blounton Saturday night. Lewis finished the night with 13 carries for 41 yards, while Blount had eight carries for 31 yards.

Lewis, just as he did in 2015 before tearing his left ACL in early November, has provided a big spark for the Patriots since coming off the physically unable to perform list on Nov. 20.

Lewis' first score came off a 13-yard reception from Tom Brady in the first quarter. A field goal by the Texans later in that quarter was immediately answered by Lewis' 98-yard kickoff return for his second score.

"It was a great return and great execution. The guys made their blocks," Lewis said. "All season since I've been back, I knew we'd get one but just haven't had too many opportunities to take it out with all those deep kicks. But we knew there was going to be opportunities, and I hit it. The guys did a great job for me."

Lewis' third and final touchdown came on a 1-yard run in the fourth quarter.

The Patriots back, however, felt his historic feat was overshadowed by another play in the game.

"It's nice, but I'm just disappointed because I put my team in jeopardy," Lewis said, referring to a lost fumble on a kickoff return in the second quarter that the Texans turned into a touchdown. "So I've got a lot of work to do."

"He made some big plays for us -- the kickoff return was incredible," Brady said.

Going back to last season, the Patriots haven't lost when Lewis has been in the lineup, going 15-0.

According to the Elias Sports Bureau, Lewis is just the third player in NFL playoff history to have a receiving touchdown and a kickoff return touchdown in the same game. The others were Dante Hall (Chiefs) in the 2003 divisional playoffs against the Indianapolis Colts and Jacoby Jones (Baltimore Ravens) in Super Bowl XLVII against the San Francisco 49ers.

The Patriots will play in their NFL-record sixth straight AFC Championship Game next Sunday against either the Chiefs or Pittsburgh Steelers.

Lewis scores three TDs in Patriots' win
Dion Lewis opens the scoring for the Patriots with a 13-yard receiving touchdown and follows it up with a 98-yard kickoff return touchdown later in the first quarter. In the fourth, Lewis punches in a 1-yard rushing touchdown to extend the Patriots' lead.