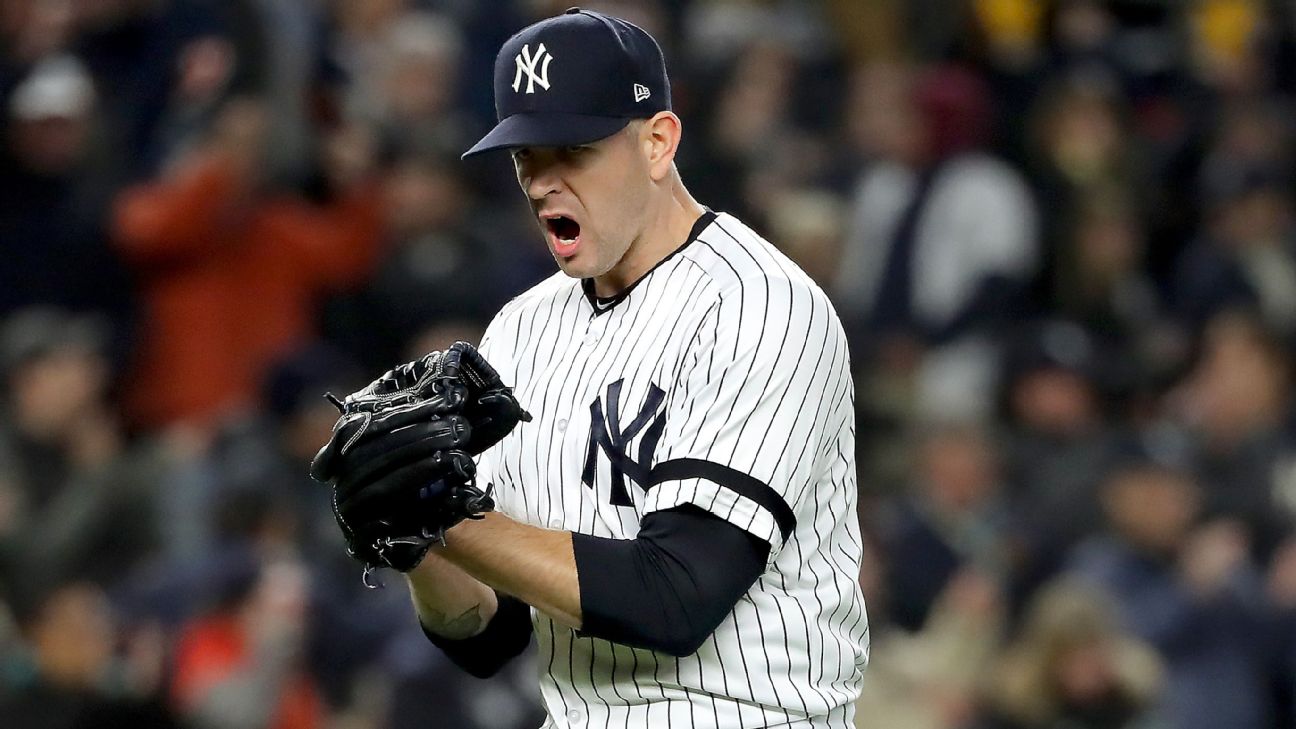 NEW YORK -- The New York Yankees will live to play another day in the American League Championship Series after a bit of first-inning magic secured a 4-1 victory over the Houston Astros in Game 5 on Friday night to send the MLB playoffs series back to Texas.

The Bronx Bombers' bats woke up after a three-game slump, with DJ LeMahieu and Aaron Hicks hitting first-inning home runs against Astros ace Justin Verlander to build a three-run lead they would never relinquish. It was the first time that Verlander, 4-0 in seven previous October starts against the Yanks, gave up two home runs in the first inning in his postseason career.

"It was just a really good string of at-bats together against Justin, probably the best time to hopefully get to him is early," manager Aaron Boone said. "With DJ going out there and getting into one and then [Aaron] Judge and Gleyber [Torres] finding the chalk down there. And then Hicks, the same thing, and he was able to clip him. It was huge to get off to that start, especially after they scored a run in the first inning."

LeMahieu hit a leadoff home run on Verlander's second pitch of the game to tie the score after the Astros had taken an early 1-0 lead on a wild pitch by starter James Paxton with runners on the corners. It was just the second time in 28 career postseason starts that Verlander gave up a leadoff home run, his first since Game 1 of the 2012 American League Division Series to Coco Crisp.

Hicks followed with a three-run shot off the 36-year-old 2019 Cy Young contender, the most runs he has given up in a single inning in the postseason. Verlander surrendered four runs in a single game for only the eighth time in 29 postseason outings. Even more incredibly, it was the first time the Yankees have hit two first-inning home runs in a postseason game, no small feat considering it came in their 405th playoff game.

It was imperative for the Yankees to set the tone early against Verlander, who then went on to pitch one-hit, shutout ball over the next six innings, striking out nine.

"It was a good feeling. We needed a good start," said LeMahieu, whose home run was the first leadoff homer by a Yankee in the postseason since Derek Jeter's in Game 3 of the 2009 ALCS. "I was just trying to get on base, hit something hard and get things going and put a pretty good swing on it. We had a tough top of the first inning. Like always, just trying to get things going. But we really needed to get it going today."

Said Hicks: "That was the game plan, to strike early. Get some good pitches to hit early in the count and try to be aggressive towards him early in the game, and we were able to score four off of him."

Hicks certainly didn't look like a hitter who hadn't taken regular at-bats since early August. The outfielder went from missing more than two months because of a strained flexor in his right elbow, pondering whether he'd need to undergo Tommy John surgery, to being the Yankees' hero in a do-or-die game against the team with the best record in the majors.

"It has a lot to do with the people that helped me get here; the staff down there at the minor league complex really got me going, giving me whatever I needed; all the stuff to get me prepared for the postseason," Hicks said, giving credit to the Yankees coaches in Tampa, Florida, where he spent a good part of his injury rehab. "And then when I got here, obviously playing in the games is the adrenaline, it's being able to compete and wanting to compete ... is kind of what's got me here."

A single by Judge and a double by Torres gave Hicks a pair of baserunners to work with when he struck his blow off the right-field foul pole. The Yankees had been hitless in their previous 15 at-bats with runners in scoring position -- their longest such streak all season -- before Hicks' home run.

"Hicks' home run was huge; DJ's too, from the leadoff spot. To start with a home run is a huge opportunity for us, and against a really good pitcher like Verlander," Torres said. "It was really important to get to Verlander in that first inning because you saw what he can do when he settled down. We never thought about this as an elimination game and we tried to attack early and made good contact. The way we did things was very important, we stayed patient and did what we needed to."

The Yankees would have never reduced the Astros' lead in the best-of-seven series to 3-2 without a stellar performance by Paxton, who gave them six strong innings to combine with the bullpen to hold the Astros' potent offense to only one run after Houston outscored New York 12-4 in the previous two games in the Bronx.

"That's why we got him. That's why we made the trade for him, to get a guy like that," Judge said of Paxton, who was acquired from the Seattle Mariners in November last year. "He's the best left-handed pitcher in the game. In any big game we've had all year long, he's always stepped up for us. That's what he did. He wanted to rebound from his last start of the postseason and he did that tonight. He commanded the zone, kept them off balance all night."

Catcher Gary Sanchez, who continued to struggle offensively, now hitting only .100 (2-for-20) with 11 strikeouts in the ALCS, agreed that Paxton's effort was key.

"Paxton was great, he did exactly what we expected of him today," Sanchez said. "I think that was one of his best games of the year, at one of the biggest moments of the season for us."

Paxton admittedly felt the intensity of the moment in the first inning, which led to the game's first run. But he was able to settle down to give up only four hits over his six innings while striking out nine. Reliever Zack Britton came to teammate Tommy Kahnle's rescue in the seventh, getting the final two outs with two runners on base before working a perfect eighth inning. Closer Aroldis Chapman pitched the ninth to record his second save of the postseason.

One loss away from elimination, slowing things down and using every moment is where the Yankees are. It has taken them to a Game 6. Now they just have to grind their way to a Game 7. 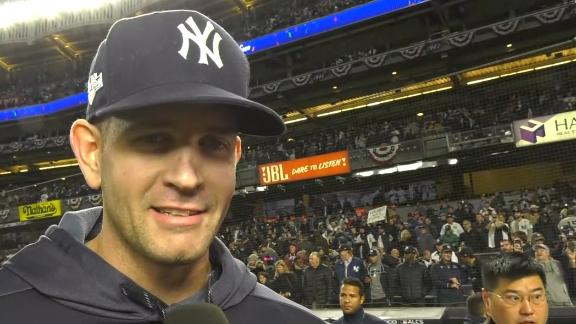 Paxton encouraged Boone to let him finish the 6th
James Paxton credits his focus for earning a Game 5 victory, and admits he encouraged Aaron Boone to leave him in during a sixth-inning mount visit. 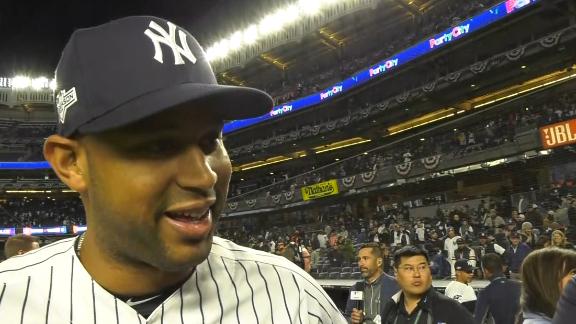