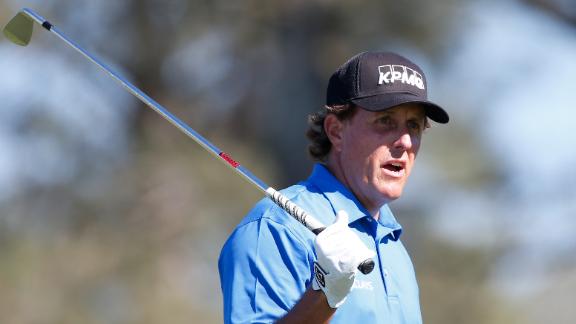 SAN DIEGO -- For the second straight week, both Tiger Woods and Phil Mickelson won't be around for the weekend of a PGA Tour event.

After Woods withdrew with back problems Thursday after just 11 holes of the opening round, Mickelson joined him on the sideline Friday by failing to make the 36-hole cut at the Farmers Insurance Open.

Mickelson shot even-par 72 on Torrey Pines' North course to complete 36 holes at 2-over 146 to miss the projected cut by three strokes.

"You can't compete out here putting the way I did," said Mickelson, who three-putted five times through 36 holes. "It was one of the worst putting performances and the first few weeks really have been the same way and you simply can't compete at this level putting like that."

Mickelson and Woods have combined to win this tournament 10 times. Prior to the Phoenix tournament, they had only missed the cut in the same tournament once, at the 2012 Greenbrier Classic.

After his worst season in more than 10 years, Mickelson, 44, entered 2015 optimistic about turning things around. But after a tie for 24th at the Humana Challenge, Mickelson has back-to-back missed cuts and won't play again until the Honda Classic beginning Feb. 26.

"I look up and the ball's not going in the hole," Mickelson said. "I don't know how else to say it. That's got to change.

"I spent a lot of time in the offseason with ball-striking, with driving, with a lot of the areas that I'm doing well right now, primarily because I thought my putting was fine. I had putted phenomenal all of 2013 and even the last few months of 2014. I felt that wasn't going to be an issue, but it is."

Mickelson has vacation time scheduled with his family because his kids' spring break falls over the next two weeks, but said he'd have to "make time" to work on his putting issues.

"I'm down, I'm frustrated," the five-time major champion said. "Because I see other parts of my game do very well, but putting as bad as I have, it starts to creep into some of the other areas, too.

"I don't think it will be a quick fix, just because you putt bad for a few weeks, it's going to take a little bit of good rounds, it will take not only some fundamental change, but it will take some good low rounds and some hot putting streaks to get confidence back, too."

While some of the big names may be out, Harris English put together a bogey-free round to finish at 6-under 66 for the day and grab a two-shot lead over Martin Laird (68), Jhonattan Vegas (69) and Nick Watney (65). English was at 10-under 134.

Justin Rose, at No. 5 the highest-ranked player at Torrey Pines, also shot 70 on the North and missed the cut. So did Hideki Matsuyama, who three-putted for par on the closing hole on the South Course to miss by one shot; Jordan Spieth, who needed an eagle on the 18th on the South to make the cut and hit it in the water; and Dustin Johnson, playing for the first time since a six-month break to get professional help for "personal challenges."

"The last two days, I think normally I probably would be at least 5 or 6 under right now instead of even par," Johnson said. "But I'm happy with where it's at. Just a little rusty, that's all."