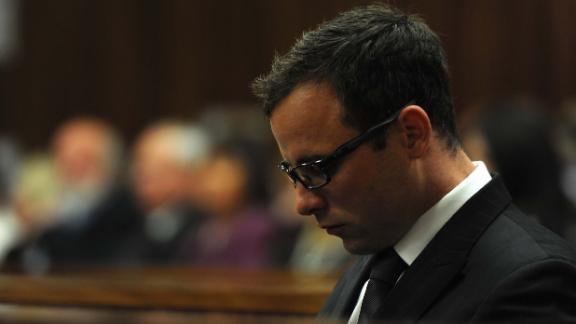 PRETORIA, South Africa -- The chief prosecutor in Oscar Pistorius' murder trial said Thursday in closing arguments that the athlete repeatedly lied during testimony in a crude attempt to defend against a murder charge for killing girlfriend Reeva Steenkamp.

Prosecutor Gerrie Nel cited flaws in the defense, saying the Olympian's legal team floated more than one theory about what happened on the night that Pistorius shot Steenkamp through a closed toilet door in his home. Defense lawyers had argued that Pistorius fired in self-defense, fearing an intruder, but Nel said they also raised the possibility that he was not criminally responsible and accidentally shot because he was "startled."

"It's two defenses that you can never reconcile," Nel said as Pistorius sat behind him in the dock, occasionally flicking through documents. The once-celebrated double-amputee athlete appeared calm, in contrast to some past occasions, when he retched and wailed in apparent distress.

The prosecution has argued that Pistorius intentionally shot Steenkamp before dawn on Feb. 14, 2013, after a quarrel, and argued he knew she was in the bathroom.

Nel ended his closing argument by saying Pistorius was guilty of premeditated murder because he then "made up his mind" to find his gun, walk through to the bathroom and shoot.

"That, my lady, is pre-planning," Nel said to judge Thokozile Masipa.

Nel said Pistorius should be convicted of murder even if the court accepts he did not know it was Steenkamp in the toilet cubicle, arguing the athlete intentionally shot at and killed a person with no reason to believe his life was under threat.

Barry Roux, the chief defense lawyer, listened and checked files as Nel spoke for hours. Nel was occasionally questioned by Masipa and urged to speed up elaborations on written arguments of more than 100 pages that were submitted to the court last week.

Roux began his final arguments before Masipa postponed proceedings until Friday for the defense to finish. Masipa will then adjourn the trial to deliberate with two legal assistants on a verdict, with Pistorius facing 25 years to life in prison if convicted on the main charge of premeditated murder.

South Africa has no trial by jury.

Roux noted that some of the evidence at the scene, which Nel referred to, had been moved around by investigators.

"We're not talking about a conspiracy," Roux said, calling it unintentional tampering. Roux also noted that Hilton Botha, the former chief investigating officer in the case, had acknowledged mistakes in police procedure but was not called by the state as a trial witness.

According to Nel, Pistorius was vague in allegations that police had possibly tampered with evidence around the scene of the shooting, including fans and a bedcover strewn on the floor of his bedroom. It was also improbable that the athlete, in his version, rushed with his gun to investigate a purported sound in the bathroom without first trying to talk to Steenkamp and confirm that she was safe, the prosecutor said.

"We cannot argue that he was the worst witness ever, that honor belongs to someone else," said the prosecution's written argument. "The accused was, however, demonstrably one of the worst witnesses ever encountered."

The prosecution said Pistorius also "used well-calculated and rehearsed emotional outbursts to deflect the attention and avoid having to answer questions."

A psychologist who examined Pistorius during a court-ordered observation period concluded that the athlete had become severely traumatized since the killing and could become an increasing suicide risk unless he continues to get mental health care.

The fathers of the Olympic runner and Steenkamp, a model and television personality, were in the courtroom for the first time since the trial began in early March. They sat at opposite ends of a long bench in the gallery. Pistorius is said to be estranged from his father, Henke, and Steenkamp's father, Barry, has been ill.

Pistorius' older brother, Carl, who has regularly attended court sessions, was in an intensive care unit in a South African hospital and was on a ventilator because of injuries suffered in a car crash last week, the Pistorius family said in a statement.

In addition to the murder charge, Pistorius faces three separate gun-related charges. He has pleaded not guilty to all charges.

Because South Africa has no trial by jury, Masipa will decide if Pistorius committed murder, is guilty of a negligent killing, or if he made a tragic error and should be acquitted. The runner also would be sent to prison for years if found guilty of murder without premeditation or culpable homicide.

Masipa told Nel and Roux that they had only until the end of Friday to complete their final arguments in court.

"Unless, of course, you want to work on a Saturday and perhaps Sunday, after church," she said, smiling.