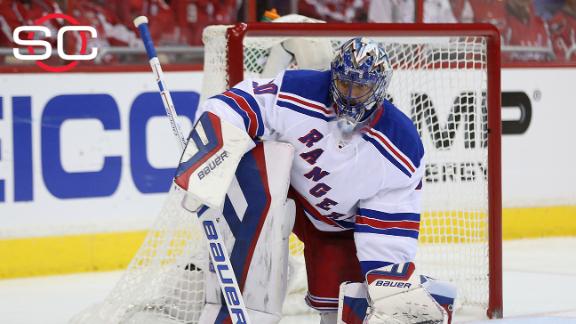 There has been plenty of drama in the NHL playoffs this season.

Just not many goals.

More than half the games through the first two rounds were decided by one goal, and 15 went to overtime. More than one in every four games was decided by a score of 2-1 and the 4.88 goals per game is the lowest in an NHL postseason since 2012 (4.84). Credit the big, talented goaltenders, better coaching and shot-blocking and the mentality of the players once they get to this stage of the season.

"When you get to the heightened intensity and how you're hanging on every play of every single game in the playoffs, a 2-1 game becomes pretty darn exciting," Tampa Bay Lightning coach Jon Cooper told the Canadian Press. "That probably masks a little bit of not so many goals being scored because it's the win-at-all-costs type of atmosphere and I don't think people care as much about the score."

Among the four teams left, only the Chicago Blackhawks, who split goaltending time in the first round between Corey Crawford and Scott Darling, have allowed more than two goals a game. TheNew York Rangers'Henrik Lundqvist, Anaheim's Frederik Andersen and Tampa Bay's Ben Bishop all have a 2.00 goals-against average or below.

"The goaltending has been just out of this world and if you look at the names that are goaltending for each series, they're pretty big names," said coach Bruce Boudreau, whose Ducks have a playoff-best 35 goals. "That's why I think the goal scoring is down."

The size of goaltenders is up. Among the 26 goalies to make an appearance in these playoffs, only Jaroslav Halak of the New York Islanders is under 6-foot-1.

"The day and age of the small goaltender is done," said Colin Campbell, the NHL's director of hockey operations. "Ben Bishop is 6-7, Frederik Andersen is 6-3. Big goalies, they fill the net, but also with big equipment and it's hard because with big equipment they play a certain style that they need protection on the inside of their pads."

Bigger butterfly goaltenders need more padding than their predecessors, and the league has taken steps in recent years to shrink the equipment enough to try to increase scoring. Goalies also have better technique, coaching and training now.

But often the puck doesn't get to the net because of the increased emphasis on blocking shots in the playoffs; 34.8 percent of shot attempts through 69 games were blocked.

"We once said if we wanted to increase goal scoring, we needed worse goalies and worse players," Campbell said. "Players are getting better, the coaching is better, preparation is better. It's easier to prevent goals than it is to produce and manufacture goals."

Cooper said players who might take an extra chance or make an extra move at the blue line in the regular season to create a scoring chance do nothing of the sort in the playoffs.

"For 82 games in the regular season, everybody's trying to score, and as soon as the playoffs start, everybody's trying to prevent goals," Cooper said. "There's such a commitment to play defense now and not as much a commitment to score because teams know you just really need to get one, maybe even two, and there's a really good possibility you're going to win the game."