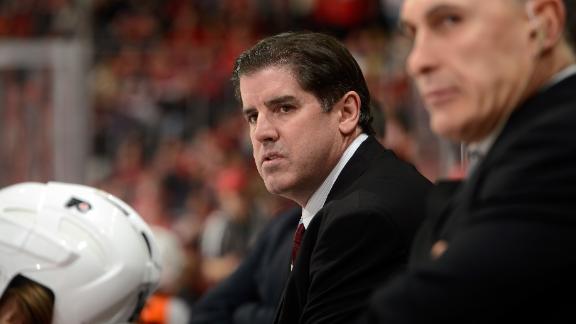 Laviolette spent parts of the past five seasons as coach of the Philadelphia Flyers, who fired him just three games into this season.

A Stanley Cup-winning coach with the Carolina Hurricanes in 2005-06, Laviolette replaces Barry Trotz, who parted ways with the Predators last month after serving as the first coach in franchise history.

"Having reached the peak as a Stanley Cup champion, Peter knows the intensity and urgency it will take to help our team reach its ultimate goal," general manager David Poile said in a statement released by the team. "He is a great hockey mind who not only has a winning résumé but has done it with an aggressive offensive philosophy while also excelling in helping young players reach their potential.

"We look forward to Peter instilling his culture in Nashville immediately following his duties coaching the United States at the 2014 World Championship."

The team also said Kevin McCarthy has been hired as an assistant coach.

The 49-year-old Laviolette will take over a Predators team that features goaltender Pekka Rinne, who missed most of the season due to a hip injury, and talented defensemen in veteran Shea Weber and youngster Seth Jones.

The Predators went 38-32-12 this season, missing the playoffs for the second consecutive year.

"I love the nucleus of this team, starting on the back end with two of the best players at their positions in defenseman Shea Weber and goaltender Pekka Rinne, in addition to a solid group of dependable veterans and talented, rising young talent," Laviolette said in the team's release.

"My challenge will be to impart a system that enables our young forwards to thrive and reach their offensive potential. Being a perennial Stanley Cup contender requires buy-in, passion and commitment from every player on the roster. I can't wait to get to Nashville and get started on our journey."

Laviolette has been a head coach for 12 seasons, starting with the New York Islanders (2001-03). He was with Carolina from 2003 to 2009 and Philadelphia from 2009 until October. He has taken teams to the playoffs six times, winning nine series. He helped the Islanders end a seven-year postseason drought with back-to-back berths in 2002 and 2003, and the Flyers lost in the Cup finals to Chicago in six games in 2010.

He is considered an offensive-minded coach, and his teams have finished in the top 10 in six of his eight full seasons and not lower than 13th in goals scored. Offensive production is a major need for the Predators, who scored only 214 goals this season and finished three points out of the final Western Conference playoff spot.

McCarthy will join assistant coaches Phil Housley and Lane Lambert, who worked with Trotz. The Predators announced April 14 that they would not bring Trotz back.