Purged for Yankees' youth movement, Beltran and McCann are back as opponents 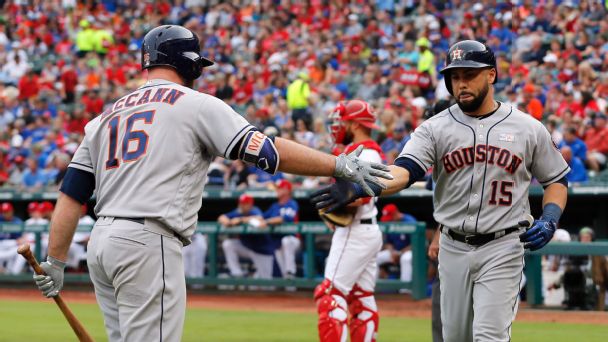 NEW YORK -- Even before Gary Sanchez failed to handle Didi Gregorius' short-hop relay throw on the final play of Game 2 in the American League Championship Series, he was under some scrutiny for his shortcomings behind the plate. Scouts, media members and even New York Yankees manager Joe Girardi have weighed in on Sanchez's strengths and flaws and debated the need for improvement for a while now.

Amid the praise and the criticism, the most forceful recent endorsement of Sanchez has come from the man he displaced as Yankees catcher 15 months ago -- which tells you everything you need to know about Brian McCann.

McCann, in his first season as theHouston Astros' catcher, has been asked about Sanchez multiple times during the ALCS. He unfailingly responds with glowing reviews of Sanchez's skills as a hitter -- something everybody can agree upon -- and also his progress as a defender.

"I think he's done an amazing job behind the plate," McCann said. "This isn't easy, putting the gear on every day, learning hitters' tendencies and weaknesses and studying [the game]. It's hard, and especially hard in New York. I think he's done exceptionally well.

"I'm a huge fan of Gary. I don't know when it was, but I told him, 'I want to look up in 10 or 15 years and see you continue this success, continue on the grind.' Because there aren't many guys that are willing to put the gear on that can swing the bat like he can."

When McCann and outfielder Carlos Beltran suit up for the Astros in Game 3 on Monday night, the baseball world will see two classy, respected veterans who still find a way to contribute when their numbers aren't what they used to be.

The Yankees, who know from experience, see two avuncular types whose influence lingers in the Bronx long after they've left the premises.

Beltran, 40, is in the final stages of a career that will make the Hall of Fame electorate think long and hard about his candidacy for Cooperstown. He passed Billy Williams, Mike Piazza, Cal Ripken Jr., Andruw Jones and Juan Gonzalez on MLB's career home run list with 435 this season, and his 1,078 extra-base hits place him second in baseball history to Eddie Murray, who has 1,099.

Three of Beltran's 20 seasons came in the Bronx, where he watched Sanchez, Aaron Judge, Starlin Castro, Gregorius and others pave the way for a new era of Yankees baseball. Beltran set an example for his young teammates with his professionalism, and he felt energized by the atmosphere and the pinstripes.

"It's the history of playing with an organization that has had so many great players," Beltran said. "You go to spring training and you're around Reggie Jackson and all the old-timers there. That was fun. Or the Old-Timers' Games at Yankee Stadium. I'm a baseball fan, and I saw some of those guys play. When you get close to them, it's an opportunity to learn something."

The numbers reflect Beltran's decline and the harsh reality that he's nearing the end. Beltran logged a .231/.283/.383 slash line and a wins above replacement of minus-1.1 as Houston's principal DH this season. That tied him with Philadelphia's Tommy Joseph for third worst in the majors among positional regulars behind Albert Pujols and Mark Trumbo.

But Beltran's influence still resonates in his batting cage tutorials, the team dinners he arranges, and the other unseen ways that he keeps his younger teammates involved and constantly thinking baseball.

"He'll take time out of his day to help you out. That's the best part about him," Astros outfielder Jake Marisnick said. "He told me from Day 1 of spring training, 'Hey, if you ever want to watch video, come get me at any time. It doesn't matter what I'm doing. I'll drop it and I'll come watch video with you.' He loves watching other people succeed."

McCann, at 33, made six straight National League All-Star teams from 2006-11 in Atlanta, but he now falls more in the "solid" category rather than the elite level of the catching spectrum. The Yankees signed him to a five-year, $85 million contract in November 2013 in hopes that his left-handed power bat would mesh with the short porch in right at Yankee Stadium, and McCann hit 20 homers for three years running in New York.

But when Sanchez arrived from the minors and slugged .657 with 20 homers in 53 games last summer, McCann knew he was expendable. He waved his no-trade clause in November, clearing the way for Yankees GM Brian Cashman to send him to Houston for two minor league pitchers.

"When the season ended, I kind of assessed where I was and what I wanted to do going forward," McCann said. "I just wasn't ready to catch once a week, and I wasn't ready to DH against right-handed pitching. I didn't think I was there in my career. I felt like I had a lot of good games behind the plate going forward."

Girardi, a former catcher, remains an ardent fan of McCann. Just not this week.

"He was important in our clubhouse," Girardi said. "He came to play every day. He's a fighter. He has an understanding of what he has to do behind the plate to get the most out of his pitchers, and he finds ways to get big hits.

"Everybody loves Mac. He's a hard guy not to love, even when he's on the other team. Now, that's not to say I won't get mad at him if he does damage against us. But he's got a great personality. He meant a lot to us and a lot to me."

Thus far, McCann and Beltran are a combined 0-for-12 in the ALCS, and the Astros lead the series 2-0 thanks to consecutive 2-1 victories at Minute Maid Park.

A few old memories might resurface as play shifts to New York. But once the pleasantries are exchanged and the caps are tipped from one foul line to the other, it will be baseball as usual in the Bronx. McCann, Beltran and their old friends wouldn't have it any other way.
Report a correction or typo
Related topics:
sportsespnmlbcarlos beltrannew york yankeeshouston astrosbrian mccann
Copyright © 2020 ESPN Internet Ventures. All rights reserved.
More Videos
From CNN Newsource affiliates
TOP STORIES

Protests spread across NYC Saturday after night of violence in Brooklyn