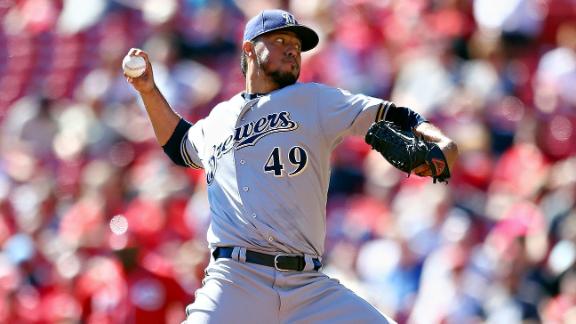 The Texas Rangers are close to a trade to acquire right-handed pitcher Yovani Gallardo from the Milwaukee Brewers, a baseball source confirmed to ESPN.com on Sunday.

It was not immediately known which player or players would be going back to Milwaukee in the trade.

Gallardo, 28, is 89-64 with a 3.69 ERA in parts of eight seasons with Milwaukee. He'll make $13 million this season in the final year of a multiyear contract and will be eligible for free agency in November. Rangers general manager Jon Daniels has said previously that the club is interested in signing players entering the final year of their contracts.

Gallardo played high school baseball in Fort Worth, Texas. One source told ESPN that if a trade occurs, Gallardo is amenable to signing a long-term deal to stay with the Rangers before he hits the open market.

Gallardo would join Yu Darvish and Derek Holland in Texas' rotation, with Colby Lewis, Ross Detwiler, Nick Tepesch and Nick Martinez among the other pitchers in the mix for starting spots.

The Rangers came into the offseason looking for quality starting pitching, particularly someone who could pitch a lot of innings. Gallardo has gone at least 200 innings twice in his career.

Foxsports.com earlier reported the Rangers are closing in on a deal for Gallardo.