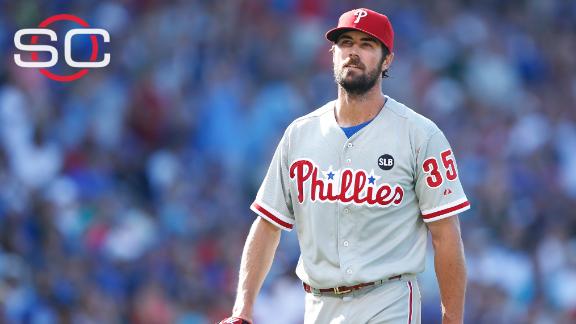 The Rangers also will get left-handed relieverJake Diekman in the deal, in return for left-handerMatt Harrisonandfive prospects.

The Phillies had told several teams interested in acquiring Hamels that they'd like to get their "best" offers by Wednesday, sources previously told ESPN. The Phillies had continued to speak with a large number of teams about the 31-year-old lefty, including the Dodgers, Cubs, Giants, Astros, Diamondbacks, Yankees and Red Sox.

Hamels (6-7, 3.64 ERA) threw a season-high 129 pitches in Sunday's no-hitter over the Cubs at Wrigley Field. He would become the first pitcher in major league history traded during a season immediately after throwing a no-hitter.

Texas is seven games behind AL West-leading Houston and four games behind Minnesota for the AL's second wild-card spot.

"He's definitely a great pitcher,'' Rangers first baseman Mitch Moreland said after Texas beat the New York Yankees 5-2 Wednesday. "Obviously watched the no-hitter the other day, pretty impressive. He's got a long track record of great success. It will be huge for us.''

The 2008 World Series MVP was an integral part of the greatest run in franchise history, when the Phillies won five straight NL East titles from 2007 to '11, including two pennants and one World Series.

"He's been here a long time, but that's baseball,'' Phillies catcher Carlos Ruiz said following an 8-2 loss at Toronto. "Definitely it's sad when you're around one of your teammates for a long time and then they have to go away.''

The rebuilding Phillies, an MLB-worst 38-64, traded All-Star closer Jonathan Papelbon to Washington on Tuesday. Both players made it clear they wanted to play for contenders.

The Rangers effectively will wind up paying only about $40 million for the next three-plus seasons, a source told ESPN.com.

Alfaro, the key prospect heading to Philadelphia, is expected to miss the rest of the season because of an ankle injury he suffered in June. He was hitting .253 with five home runs for Double-A Frisco prior to the injury.

The Rangers acquired Thompson in a trade that sent Joakim Soria to the Tigers in July 2014. The Rangers' No. 4 prospect entering the season, according to Law, Thompson has struggled in the minors this season, with a 4.72 ERA in 87.2 innings at Double-A Frisco.

Harrison returned earlier this month following spinal fusion surgery in June 2014. The 29-year-old lefty has a 50-35 career record with a 4.21 ERA.

Information from ESPN's Jayson Stark and Jim Bowden, ESPN Stats & Information and The Associated Press was used in this report.