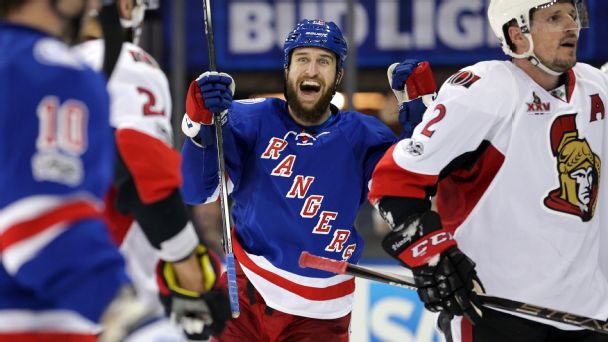 NEW YORK -- To make a deep playoff run, a team needs both its stars and its role players to step up at critical times.

When the New York Rangershave been successful in these playoffs, it's because they've gotten the full package. In their big Game 3 win over the Ottawa Senatorson Tuesday night,Rick Nash and Mats Zuccarello scored goals. Henrik Lundqvist stopped 26 of 27 shots. But the Rangers also got a key contribution from tough guyTanner Glass.

Glass didn't even dress for Games 1 and 2 in Ottawa. But coach Alain Vigneault shook things up a bit in Game 3, giving Glass a shot in place of rookie winger Pavel Buchnevich. And Glass delivered, being physical, providing energy and helping to set upOscar Lindberg's second-period goal in the Rangers' 4-1 win.

"He brings what he brings every time we dress him," Vigneault said after the game. "He's intense, and when he gets an opportunity to finish a check, he does."

Glass, 33, has played for five teams over 10 seasons, four times moving on as a free agent (plus one lockout stint in Slovakia). His five goals with the Winnipeg Jets in the 2011-12 season marked his career high.

He signed with the Rangers as a free agent in 2014, but actually spent a chunk of last season and the bulk of this season in the minors with the Hartford Wolf Pack, before making his 2016-17 debut on March 6.

Glass scored one goal in 11 regular-season games this season, but scored the game winner in the Rangers' postseason opener against the Montreal Canadiensand had a whopping 10 hits in 20 shifts in Game 2 of that series. And he proved his worth again Tuesday with the Rangers' backs against the wall, trailing the Senators 2-0 in the series. The Rangers hope to even the series in Game 4 at Madison Square Garden on Thursday night (7:30 ET).

"It's nice to get the win," Glass said after the Rangers' Wednesday afternoon practice at the Garden. "You try to focus on the team-oriented things, and it's a good win for us. [That's] only one game, though, so [we're] focused on the next one."

Glass played in the first three games of the Montreal series but was a healthy scratch for the next five. So when Vigneault turned to him again, he was ready.

"The message wasn't, 'Hey, you've got to be better.' It was just, 'We're going to go with a different guy right now,'" said Glass, a ninth-round pick by theFlorida Panthersin 2003. "It's always easier that way, [rather] than to have the second-guessing or the doubt that can creep into your mind if you've been taken out for a player for no reason.

"I kind of had it in my mind, this is going to be a long run, and I'm going to be called upon again here soon. So it was easy to stay sharp."

But Glass, who has averaged 9:32 of ice time in these playoffs, says he doesn't feel any extra pressure to perform well. He's just focused on making every second count.

"My teammates and coaches know my game," the 6-foot-1, 213-pound Glass said. "I stay within myself, play the game the way I play, and hopefully it helps our team."