Replay confirms one call, but umps err on another in O's win over Yankees 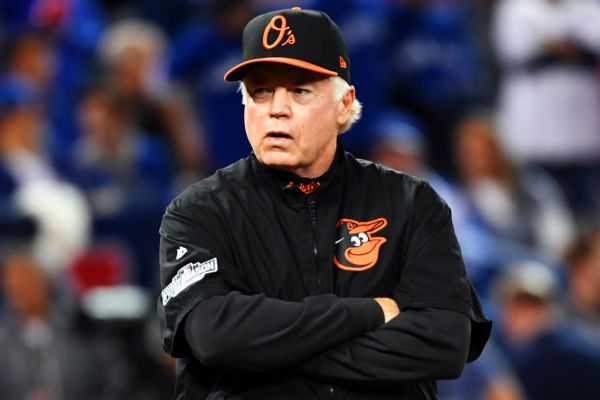 NEW YORK -- Replay confirmed umpires were correct on a controversial call that occurred late in the Baltimore Orioles' 14-inning 7-3 win over the New York Yankeeson Friday night at Yankee Stadium, according to the crew chief Jerry Meals.

On the play in question, Yankees shortstop Didi Gregorius was attempting to score from third base in the bottom of the 11th inning on a two-out wild pitch from Orioles reliever Mychal Givens. The run would have given the Yankees the win.

As Gregorius dove into home plate, Givens, while falling onto his backside, caught a return throw from catcher Caleb Joseph.

It appeared Givens was on the ground, blocking Gregorius' access to the plate a split second before he caught the ball from Joseph, and just as the baserunner -- in mid-dive -- reached for the plate. Gregorius didn't quite get to home in time, as the pair made hard contact.

Plate umpire Ed Hickox waited a moment after the contact to see if Givens held onto the ball. When he saw the ball still in Givens' glove, Hickox called Gregorius out, prompting the Yankees to challenge the call, arguing Givens had illegally blocked Gregorius' path to score.

"I thought he did block the plate before he got there. We certainly thought that," Yankees manager Aaron Boone said. "I understand that's a difficult call to make in that situation.

In a statement to a pool reporter, Meals said the replay confirmed Hickox made the correct call.

"Replay has the ultimate voice in that, and there was no blocking the plate," Meals said. "He, in that situation, the player is deemed to be occupying the area to save the ball, and/or has the ball."

Asked if Givens had to possess the ball before stepping in Gregorius' way, Meals said no.

"He doesn't have to," Meals said. "If he's going to receive the ball in that situation, then he's allowed to occupy that space if he's in the act of receiving it."

The Yankees were disappointed in the ruling, but they were at least glad the play didn't cost them their shortstop.

In addition to that play, there was another controversial one in the sixth inning involving Yankees duoGiancarlo Stanton and Gary Sanchez. New York was incorrectly the beneficiary of that call, Meals said.

Stanton began the play in question at third base and Sanchez was at first. With one out, Neil Walker hit a ground ball back to Orioles pitcher Richard Bleier, who ran toward Stanton, getting him into a rundown. While Stanton went back and forth between third and home, Sanchez advanced to third base.

Just as Sanchez arrived at third, Stanton decided to go back to the base, too. Seeing Sanchez there, he kept running up the baseline in the direction of the left-field corner. Joseph tagged him out.

Only one out was given, but per MLB rules, two should have been awarded.

Sanchez should've automatically been called out for having essentially passed Stanton on the bases. Once the tag was applied to Stanton, he would've been declared out, too. That all means the play should have ended in a double play. It didn't happen that way.

After a lengthy discussion among the umpires that included a vociferous argument from Orioles manager Buck Showalter, the ruling of one lone out -- Stanton -- stood.

The MLB rulebook actually cites a similar example of a trail runner (Sanchez) reaching a base while the lead runner (Stanton) is in a rundown. The rule says, "the trailing runner is out and third base is unoccupied. The lead runner is entitled to third base if he returns to touch it before he is out ... unless he is declared out for abandoning the bases."

The umpires misinterpreted the rule in the heat of the moment.

"What we had on the field, what Ronnie [third-base umpire Ron Kulpa] had on the field, was as soon as Stanton ran by him into foul territory there, he had him out for abandoning his effort, which gave Sanchez the base so when they tagged him, he wasn't out.